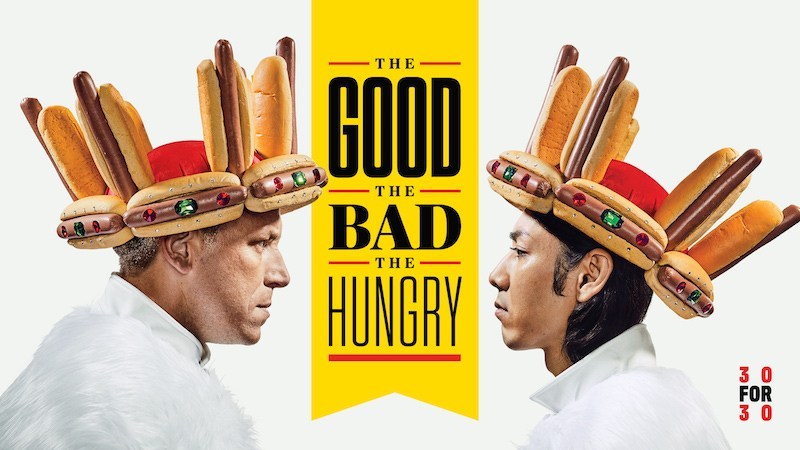 About the only thing the classic western The Good, The Bad and the Ugly has in common with ESPN’s 30 for 30 competitive eating documentary The Good, The Bad, The Hungry are the associations with spaghetti. The latter is certainly tough to watch with the copious amounts of food consumed, including hot dogs, sliders, spaghetti, p’zones, whole turkeys and even cow brains. Ultimately though this documentary isn’t about food. It’s just the vessel to tell a story about freedom, rivalries, overcoming oppression and what happens to an American dream deferred.

If you’ve ever turned on a television during the Fourth of July in the last two decades, you’ve probably seen the Nathan’s Famous Hot Dog Eating Competition. It’s the Super Bowl, World Series and Kentucky Derby all rolled into one for Major League Eating. For most of the 2000s the competition was revolutionized and dominated by Takeru Kobayashi; during this past decade, Joey Chestnut has broken every record. You also may have seen the Chairman of MLE, George Shea, serving as a hype man who’s a mix of a 1920s New Jersey Boardwalk promoter and an awful used car salesman who’s here to ruin your dreams.

At first, it seems out of place that Kobayashi opens the film talking about how there is no life without freedom. When you see these men training just as hard as Rocky Balboa with more food than you’ve ever seen in one setting, freedom isn’t the first narrative on your mind. But for a kid who grew up in Nagano, Japan, pursuing something he loved meant sidestepping school and the expectations of his Buddhist father who ate slowly and with a sense of gratitude. America seemed to be the perfect backdrop for that freedom.

Kobayashi came to the U.S. out of necessity. On July 4, 2001, he broke the world record for the hot dog eating contest with six minutes to spare. The previous record was 25 hot dogs. Kobayashi ate 50. In Japan, there weren’t many large people, let alone competitive eaters. His debut changed all of that. He legitimized this competition as a sport. Many tried to emulate Kobayashi back home, among them one boy who died tragically. And just like that, eating competitions disappeared in Japan. Kobayashi would have to build his dreams in a country where admiration for him would prove to prove to wane quickly.

By 2005, ESPN started covering the hot dog eating competition, further legitimizing the sport. At the same time, a shy competitor from a family of overeaters in San Jose, California, emerged to steal the spotlight. Joey Chestnut would eventually become the all-time winningest hot dog eating champion. To get there he’d ultimately have to beat his idol, Kobayashi. The way to take him down was to invent new training techniques, but what was most effective was turning him into his enemy. Once Chestnut started beating his idol-turned-rival, unfortunately, MLE and America started treating Kobayashi the same way.

The culture that once adored Kobayashi and threw flowers during his appearance at the 2002 competition was now demonizing him when he lost to Chestnut in 2007. Kobayashi’s mother died of cancer that year and he’d sustained a jaw injury before the competition. His mother told him that his will to compete gave her the will to undergo chemotherapy. But even after enduring all of these devastating hardships, it was the narrative of an American finally winning the competition that dominated.

Kobayashi had become an American hero, his place in the pop culture firmament culminating in a mention on The Simpsons, but now he was met with hostility and frankly racist chants. This story quickly shifts from food and an all to familiar American story of treating perceived outsiders as less than and unwelcome.

Shea did little to squash this narrative as he shows his unabashed bias for wanting an American to win. Just as he would inflate stories to raise the profile of eating competitions, he would twist the narrative around Kobayashi. MLE stated in his contract that Kobayashi was not able to compete in other eating competitions outside of the league; Kobayashi refused to participate until he got a fair contract. Shea said Kobayashi doesn’t compete anymore because he isn’t as important to MLE as Kobayashi thought. This blatant mischaracterization is the crux of the problem and culminating to the point where Kobayashi wore a “Free Kobi” t-shirt and stormed the stage of the 2010 competition.

Shea, MLE and ultimately the competition broke Kobayashi’s heart. Not Chestnut and this country. Kobi paved the way for competitors like Chestnut to get his deals changed to the point where he now has his own condiments. Even though we won’t see Kobayashi compete on the Fourth anytime soon, his accomplishments and his efforts to pave the way for others have cemented his status as an American hero, regardless of race or nationality. The fact that he is in control of his career now and still competing is the culmination of this freedom and everything that is good about this story.

The Good, The Bad and the Ugly could easily have served as this documentary’s title. The good being the perseverance of Kobayashi and even the competitive rivalry between him and Chestnut. The bad and the ugly of the continued oppression of the system that keeps bringing these athletes down. Watching this documentary makes it seem totally reasonable to call these competitors athletes for how much they train and endure. ESPN’s 30 for 30 series still is the best in its class because it continues to put at the forefront the stories of athletes and how they change our society for the better. Nothing exemplifies that better than the story of Takeru Kobayashi.

Watch the premiere of 30 for 30: The Good, The Bad, The Hungry at 8pm ET Tuesday on ESPN; then will be available on demand.