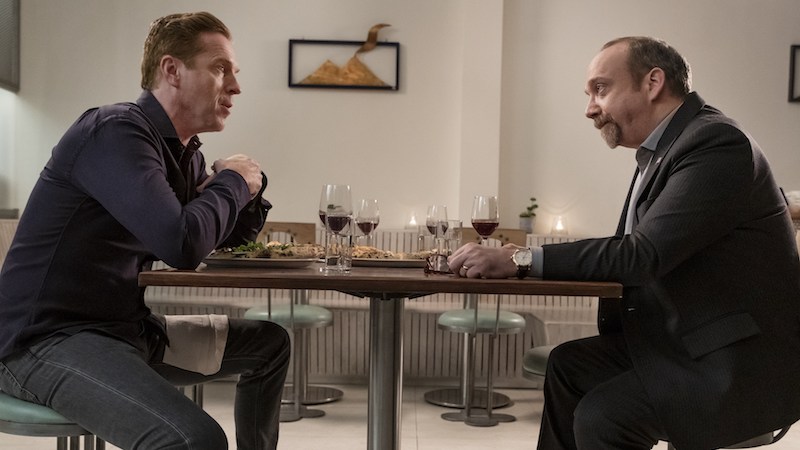 The animating conflict of Showtime’s wealth-porn potboiler Billions, which returns for its fourth season this Sunday, was always pretty simple: ambitious, upwardly mobile, to-the-manor-born U.S. Attorney for the finance capital of planet Earth Chuck Rhoades (Paul Giamatti) pursues self-made billionaire and hedge fund manager Bobby Axelrod (Damian Lewis) for a variety of malfeasances. This basic conflict is complicated by the fact that Bobby’s in-house psychologist/performance coach Wendy (Maggie Siff) is married to Chuck, as well as the fact that Chuck has certainly blurred a few legal lines chasing his white whale.

This premise yielded 36 episodes of delicious drama, and seemed to promise many more until showrunners Brian Koppelman and David Levien (who notably also cowrote Rewatchable poker classic Rounders) flipped the script: at the end of the season 3 premiere (stop here if you’re interested in Billions but have not watched it — try this primer instead) Chuck and Axe did the most surprising thing they could have done.

After spending the entire series at the head of big organizations filled with eager young proteges willing to help with whatever scheme they could think of, both Chuck and Axe suffered devastating betrayals: Axe’s brilliant analyst Taylor (Asia Kate Dillon), a gender nonbinary savant with Asperger’s symptoms and plural pronouns, took the many lessons she learned at Axe Capital — not all of them positive — and decided to take her talents elsewhere, luring Mafee (Dan Soder) and Danzig (Nathan Darrow) to her own new firm, along with the business of Russian oligarch Grigor Andalov (John Malkovich, reprising his Rounders accent, if not quite the character), a crushing blow both to Axe Cap’s bottom line and its reputation.

And, after spending last season scheming to unseat his new boss, Attorney General Jock Jeffcoat (Clancy Brown) and preparing to run for Governor of New York, Chuck found himself the victim of a sting not unlike the one he pulled on Axe at the end of season 2, walking into an ambush in his own office, with Jeffcoat at his desk, Chuck’s once-loyal soldiers Sacker (Condola Rashad) and Connerty (Toby Leonard Moore) at his side, and himself out of a job.

Soon enough, Wendy brokered a sitdown between the weakened rivals, we faded to black before they could really start scheming, and we pick up season 4 sometime later. Chuck is licking his wounds in private practice when he gets an opportunity to rebuild his power base, which he spends the premiere following up on in a very amusing procedural sequence that takes him all over the city. Meanwhile, Axe has vowed revenge on Taylor, to prevent them from poaching any more employees, and to reclaim the billions of Grigor’s rubles that Taylor stole from under Axe.

We only got to see first of the new season’s episodes, so we don’t know a lot more than you about where things are headed, but Sunday’s premiere is a stone gas, opening with one of Billions’ favorite framing devices — the in media res opening scene followed by “27 hours earlier” — and getting right to alternating between Chuck’s and Axe’s stories, which run in parallel as they each begin to pick up the pieces and prepare to challenge their former proteges for their rightful spot at the top of the mountain.

There have been a few cast changes, with the miscast Malin Akerman officially off the show as Axe’s estranged wife Lara, Christopher Denham’s Oliver Dake written off with a line of dialogue, Michael Rispoli popping up as the Police Commissioner, and Samantha Mathis joining both the show and Taylor Mason Capital as Taylor’s new Chief Operating Officer. The premiere also features amusing cameos by Donny Deutsch (playing himself) and Jerry O’Connell (still playing Lara’s onetime rebound).

The homes, clothes, and modes of transportation are still jaw-dropping, the pop-culture references still flow like a 2003 Lafitte Rothchild Bordeaux, and the performances are still just on the right side of overboard. Billions is back, Slingers, so gas up the jet, slip into your favorite $2,000 cashmere hoodie, and enjoy the ride.