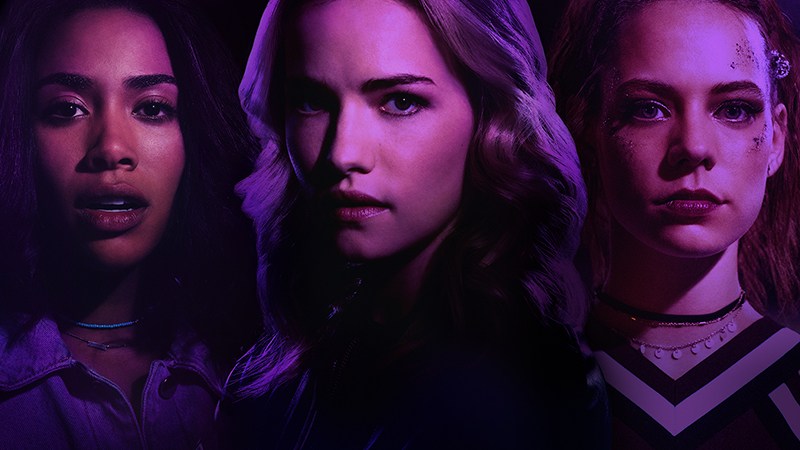 Cheerleading isn’t all glitter-streaked faces and bouncing ponytails. At its core, cheer is a sport with all the blood, sweat, tears and athleticism of more celebrated programs like football or basketball.

USA Network’s new drama Dare Me doesn’t shy away from the bruises, injuries and grueling practices endured in the name of achieving high-flying perfection on the field, even while telling a twisted tale of toxic codependency that ends in murder.

Based on Megan Abbott’s 2012 novel of the same name, Dare Me follows the implosion of an intense teenage friendship between Beth (Marlo Kelly) and Addy (Herizen Guardiola) when a new cheer coach, Colette French (Willa Fitzgerald), arrives in their small Midwestern town to dismantle the squad and bring them to competitive glory. An illicit affair between French and a Marine recruiter stationed at the school ups the suspense.

Far from a traditional whodunnit, Dare Me explores the savage temperament of adolescent girls and the ways they both uplift and wound each other, often in the same conversation.

Sling recently spoke with Megan Abbott about her dedication to messy female characters and how Dare Me is not a recipe for living. The following is an edited transcript.

Q: Currently, cheerleading is having a moment, with Dare Me and Netflix’s Cheer taking a serious look at the sport. What is it about the sport that makes it ripe for storytelling?

A: It has the things that are always good about sports with storytelling. You have stakes. You have the individual versus the group. You have conflict. You have triumph. I think what cheer has that other sports don’t have is the cheerleader is such an American icon. It has so much complicated cultural baggage. It’s fascinating – the way they’re supposed to look. The sort of cheer masks that they wear, the smiles. [It’s] such a fantasy in every way. Google cheerleader and you’ll see how many different kinds of fantasies there are around it.

Similar to gymnastics, it also has this amazing risk-taking – those aerial stunts, which heightens everything. And it’s such a great metaphor for being that age. Being out in the real world and having these experiences that put you in peril, but you’re compelled. You have to keep going. You just want more, more, more.

Q: Dare Me and your other books are notable in that they depict female characters in all of their messy, complicated glory. What are we meant to learn from or about this toxic hold that females, even after their teen years, seem to have on one another?

A: The people who watched the show often have recalled their own sort of complicated female friendships. Like everyone’s telling me their stories about their Beths or their Addys, and God knows I have a few. I think they’re kind of fundamental to the women who go through them. It’s sort of a template for the romantic relationships to come. All that feeling: How are you going to handle it? What you’re gonna do. What you’re gonna give up for another person. What needs to be swallowed up by another person and who you are separate from this person. That moment of differentiation. It often occurs when you graduate high school or something where the friendships – they’re tested and in the end they have to kind of end so each one can figure out who they are independently. It’s a kind of rite of passage and not everyone goes through it, but I think a lot of women do. It feels like it resonates with so many people because it’s one of those things that no one really talks about.

Q: The music on “Dare Me” is on point, thanks to music supervisors Jessica Berndt and Chris Swanson. Obviously, it’s very important to you. There’s even a section at the end of the book where you talk about your personal playlist that inspired the writing of “Dare Me.” Do you have a favorite musical moment from the show?

A: Yeah, I do! There’s this great Nick Cave [with Boys Next Door] song that Courtney Barnett does a cover of called Shivers which is in episode nine. It was one of those, oh my God, can we afford it? Maybe we could. And we could! It was just so perfect for the scene and it was so emotional, and I had loved that song. It was one of those where everybody thought it was right right off the bat.

Q: There’s a scene where Beth picks up some older guys at a bar and brings them home. She’s dancing on her counter in a haze of drinking while He Hit Me (And It Felt Like a Kiss) is playing. The song, written by Gerry Goffin and Carole King, is a bold choice and one that comes with a lot of baggage.

A: Yeah. The music supervisors sent me this cover of the song and the cover was so perfect for that moment for all the reasons the song is complicated and upsetting – that kind of suited the moment where you don’t really know what you’re supposed to be feeling. And it’s all about the sort of very complicated gender politics of that moment and desire and all of it. So, it was perfect and upsetting the way that we wanted it to be.

Q: Let’s talk about Beth. She is a beast. And the way Marlo Kelly plays her, she’s simultaneously captivating, terrifying and repulsive. In the show, you turn another cheerleader on the squad into her half-sister, the product of her father’s affair and choice to stay with his new family. Did you change that part of her story to be more sympathetic to viewers?

A: I wouldn’t say we were doing it to make her more sympathetic, but I think we were trying to make her more real. In the book she’s so scary. She’s a force. Cause that’s how Addy sees her – a demonic force. On the show, it became this great way to explore how someone becomes that hard at that young age. A lot of her bad behavior is coming from a place of great pain and fear of abandonment. We wanted to give her heft, especially once we had Marlo, who is so incredible and so fearless. It’s so funny, she’s just like the sweetest, smartest, most hard-working young woman and then when the camera goes on, she’s so scary.

Q: Even after reading the book and watching the entire season, Coach French is still a mystery. Does her behavior stem from just wanting to go back in time and be one of the squad girls? Is the inappropriate closeness she shares with Addy a result of their involvement in the show’s central mystery or is it grooming behavior?

A: I think the only way she’s manipulating [Addy] early on is the squad stuff. I don’t think there’s any grooming or grand plan. But I know some people have different feelings about that. But that’s how I feel about her and I know that’s how Willa did. And her loneliness is also how she ends up in that affair in many ways. But also, she’s very young and in many ways, immature. And that’s where it all gets screwed up, right? Because, like a teenager, she wants what she wants when she wants it.

Q: It’s hard to tell if their relationship is innocent or if there is something more sinister going on.

A: Yeah. We’re wary of that now in a way that we weren’t, don’t you think? We feel very conscious with all these coach abuses and teacher abuses, so I can see why those flags would go up. Cause it is still a power dynamic too – just of a different kind.

Q: We see the characters in Dare Me do drugs, drink – even while driving. Did you talk about where the line is between depicting real-life experiences that teens are having and almost instructing viewers?

A: Obviously I don’t think any TV show should be a recipe for how to live. And we don’t watch it for that. For me, like I love a movie like Lady Bird. But that was not how my teenage years were. And we all have different experiences. Everything was very safe in that world. This show is meant to reflect a different kind of teenage experience. Coaches are not going to behave well often. People are going to disappoint you. You’re gonna screw up. You’re gonna want things so badly. You’re gonna feel things that are so intense and the next day it will all fall apart. All that roller coaster of being that age.

And then in terms of the drugs and the drinking and driving – when you grow up in places where there’s not a lot to do, that is all there is to do. I explain to people who grew up in New York or LA – first of all in New York you don’t even need to have a car or worry about your teenage kids in cars – there is so much stimulation. But when you don’t, your cars and parking lots – they are weirdly your clubs and your cool bars. So, it did feel for a lot of us as we worked on the show that that was our experience. We wanted to reflect that world, and definitely not be a rule for living.

Dare Me airs Sundays at 10pm ET on USA and is available On Demand through Sling.