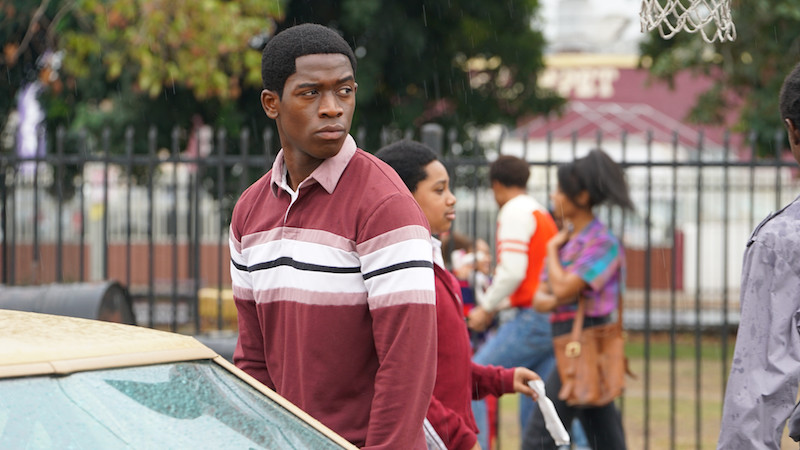 From time to time, a show will start to pick up more buzz when it’s a season or two in. Your friends are telling you, Check out this show, it’s great, and you’ll be intrigued because it sounds good. But then comes the inevitable question: How many seasons are there? And more often than not, the answer is sadly not “it premieres this week” and there is a big backlog of prior seasons, and you know at that moment that you will never watch the show in question because there’s just too much backlog.

At first glance, FX’s Snowfall might seem like such a show. Having seen the first four episodes of its engaging second season, it seems likely to make the leap into the broader TV discussion in the next month or so. But what if you have not seen the first season and do not necessarily have the time to invest in catching up?

Well, I did see the first season, and soon after I started on the second I realized a) I had retained very little of what happened in the first (a not-uncommon problem in the age of Peak TV), and b) it didn’t matter much. The broad strokes — a smart young entrepreneur in 1983 Los Angeles seizes an opportunity to move from small-time weed dealer to coke kingpin, discovering the recipe for crack along the way, as the CIA begins its own cocaine business as a means of fundraising for its Central American war effort — stayed with me, and they were all I needed to jump back in.

Part of the reason I didn’t remember much about the first season is that it was not particularly memorable. Beyond a surefire premise — a fictionalized account of the CIA’s early-’80s Crack for Contras program, exposed in journalist Gary Webb’s controversial 1997 expose in the San Jose Mercury News that became the basis for his 1998 book Dark Alliance — and some excellent casting choices, Snowfall season 1 fell prey to excessive throat-clearing and table-setting, never quite getting to the story it was promising.

Season 2 has no such problem. Opening four months after the end of season 1, we now find 19-year-old Franklin Saint (Damson Idris, with screen charisma to burn) is aggressively growing his cocaine business, with more than a dozen employees on the street and another dozen in the cook house, making the increasingly in-demand, inexpensive cocaine derivative that would come to be called “crack.” But like they say, more money means more problems: Franklin’s people are being attacked on the street, his mother has caught on to what he’s doing and banished him from the house, his aunt and uncle’s infighting is threatening the business, he needs more people on the street and at the cook house, and his new source insists that Franklin nearly double his weekly commitment to moving ten kilos a week.

Meanwhile, after a secondhand attaboy from President Reagan persuades him to stay in the coke-for-Contras business, CIA agent Teddy McDonald (Carter Hudson, playing up world-weary wit) has learned that Congress will not authorize any further funding of the Nicaraguan war, leaving Teddy to make up the shortfall. He also needs a new pilot, having killed former partner Alejandro (“he was a bad person,” Teddy later explains, going for a medal in unselfawareness) so he enlists his charming brother Matt (Jonathan Tucker) to join the party. And, with his sales partner behind bars, he needs to find a new one, and I think you probably see where this is going.

In the show’s third main plot, Lucia (Emily Rios) and her lover Gustavo (Sergio Peris-Mencheta) have taken control of her uncle’s produce-slash-cocaine importing business through violent coup, while her wayward brother Pedro returns from exile with a clear head and a new fiancee, hoping to get back into the game, and her street dealers catch wind of the rock cocaine that is suddenly all the rage, so she sets out to find a way into that growing business… and once again I think you see where this is going.

Snowfall has always had an interesting set of characters and great actors to play them, but at times it has felt like a overlong prologue to a more engaging story. If the first four episodes of the new season are any indication, the creators have got that memo, and responded, as characters that spent last season firewalled from each other in parallel plots that seldom intersected are now bouncing off each other with abandon, and the show is much richer for it.

It also looks great, never letting the viewer forget that we are in 1983 Los Angeles, allowing real-life markers like prep for the 1984 Olympics, or the characters’ enthusiasm for quoting the just-released Scarface. But in discussing that film’s ending, a couple of peripheral characters make a possibly portentous remark: “Everybody dies in that m**********r.”

Hopefully, that doesn’t happen till season 4 or 5.