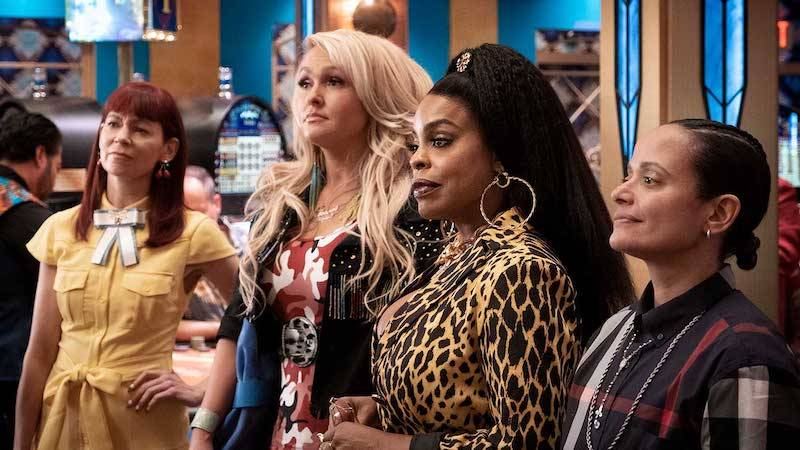 After learning that her debonair husband-to-be Dr. Ruval (Jimmy Jean-Louis) was actually a Haitian crime boss plotting with the Russian Mafia to steal Desna’s nail salon — a front for laundering the proceeds of the Dixie Mafia’s pain management clinic on the other side of the strip mall — Desna and company turned the tables: Ruval’s plan to kill Desna on her wedding day ended with him falling to his death, Desna’s brother Dean (Harold Perrineau) killing her Russian boss Zlata (Franka Potente), who had been in cahoots with Ruval, the salon being repossessed by the cops as they rolled up the whole laundering operation, and Desna learning that her brand-new husband owned a casino, which Desna stood to inherit.

But that sudden taste of good fortune quickly turned sour, as a would-be assassin pulled up on a motorcycle and took a shot at Desna — and Virginia leaping into the line of fire to save her boss and mentor.

We return to Palmetto for season 3 to pick up the action at the hospital, as Virginia fights for her life and Desna wonders, having dispatched Mafias both Russian and Haitian, who might be left to try and take her out. Desna’s ex-booty call Roller (Jack Kesy), still smarting from learning that father figure/Dixie Mafia boss Uncle Daddy (Dean Norris, Breaking Bad) was the one who killed his father, is looking to reconnect with Desna, both by vowing to find her attacker and promising — by way of quoting some Jodeci lyrics — that he’s changed.

That’s not the only way that Claws largely resets to the status quo (while introducing new challenges): Desna quickly buys the salon back at police auction; Jenn and her husband Bryce (Kevin Rankin), who had left Palmetto for Tampa hoping to escape Uncle Daddy’s long shadow, soon find themselves drawn back to the fold, where complications soon arise with the father of one of Jenn’s children turning up fresh from prison; Ann is still heartbroken from another breakup with police detective Arlene (Suleka Mathew), but not immune to a quick driveby; Polly, who had checked herself into a voluntary psychiatric ward after suddenly recovering some traumatic memories about her deceased twin sister, simply walks out and comes back to the salon; and Virginia, who took a bullet in the face, walks away with two souvenirs — a bedazzled eyepatch, and a new sort of wisdom that has her dispensing good advice to everyone. “I see you all so clearly now!” she tells the others. “It’s kinda like the Clarendon filter on Instagram.”

But if you think that means things are about to get dull, you haven’t been watching Claws. Desna’s inherited casino comes with two very big strings attached named Mac and Melba (Michael Horse and Rebecca Creskoff), Ruval’s creepy partners (in a nice character touch, Melba carries around a portable oxygen tank and mask that she frequently hits off of) who are very eager to buy Desna out. Desna’s autistic brother Dean, having killed Zlata in Desna’s defense, is entertaining increasingly disturbing revenge fantasies on Virginia’s behalf. And of course Desna and crew now have a casino to run, with Polly smoothly assuming the role (and dress, and speech pattern, and smart-girl glasses) of co-General Manager, Ann Head of Security, Jenn Head of Hospitality, and Virginia holding things down back at the salon, where Uncle Daddy is eager to resume laundering Oxy funds. And, oh yeah, we still need to figure out who shot at Desna.

This show has always been, at its core, a (highly sensationalized) study of female friendship, always ready to make room in its twisty crime plots for a fully choreographed dance number with the full cast, just because. The show is also making a point of inserting references to real-life class and racial tensions in Florida, to keep it somewhat grounded in the midst of all the over-the-top fun. If you’re looking for a new summer show, Claws is a perfect blend of silly and sincere — and if you’re already a fan, it’s as sharp as ever.