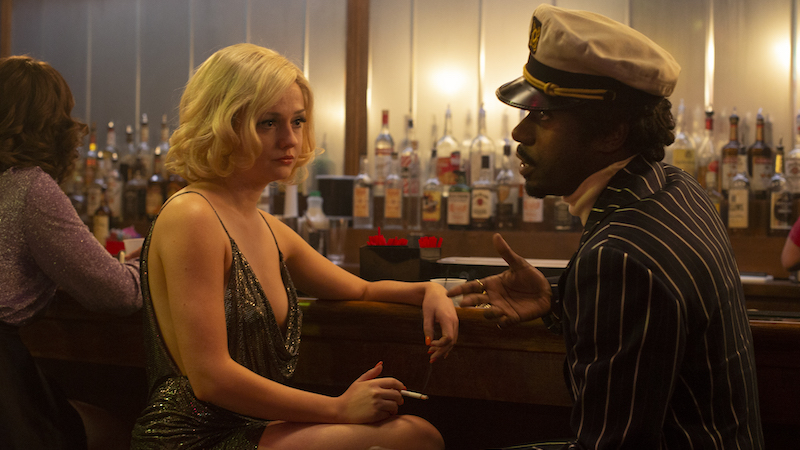 “Whoever would have thought the most boring part of this whole thing would be the [sex]?”

REVIEW: David Simon has the ’70s Wired in ‘The Deuce’

One of the most interesting things about this second season is how the advent of the porn industry to some degree seems to empower the prostitutes who join it. I don’t mean that all of their problems are solved, or even most of them, as they are still stuck in the sex trade, but the pimps who so tightly control every aspect of their lives are being slowly made irrelevant. We see this both with C.C. (Gary Carr) and Lori (Emily Meade), the pimp and prostitute who found each other in the series pilot, and with Larry (Gbenga Akinnagbe) and Darlene (Dominique Fishback), in different ways: Lori has become, in porn-adjusted terms, something of a star, drawing the interest of legitimate agents and managers who will only take 10% of her earnings and spare her the regular beatings; and when Darlene notices that she is being paid less than her white counterparts, Larry is too cowed — and perhaps too invested in his own fledgling career as a performer, which affords us a hilarious scene where he learns that on a porn set, “DP” does not necessarily mean the cinematographer — to make things right. Both men’s power is slipping — and we haven’t even mentioned Rodney (Method Man), who is now little more than a simpering junkie.

That doesn’t mean the women are on top, however. In her effort to secure financing for a naughty version of Little Red Riding Hood that she aspires to shoot in such a way that a clean version can be edited and released as an R, Candy suffers a humiliation made all the more heartbreaking for the way she takes it in stride (but not before a marvelously acted moment of silent contemplation by Gyllenhaal). Similarly, in another showcase of silent acting, Lori luxuriates in every moment spent away from C.C. when she travels to Los Angeles for the Adult Film Awards, but her liberation is tempered by knowing what will be waiting for her when she gets home. And Abby (Margarita Levieva), now saddled with a period-appropriate but tragically unflattering hairstyle and splitting time between running the Hi-Hat, sneaking off to shows at CBGB, and continuing her efforts to get girls off the street, despairs at the casual indifference to the streetwalkers’ suffering, but reconnects with a new ally: Dorothy, formerly Ashley, the girl Abby helped out with a place to hide from C.C. last season, is back and seemingly fully liberated, wearing Steinem glasses and civilian clothes as she works to get the girls on the deuce the medical help and resources they need. But in a third bit of exceptional wordless performance by Jamie Neumann, Dorothy struggles to keep her composure on her old stomping grounds, and is particularly rattled coming face-to-face with the pimp we saw treat her so horribly last season.

We’ve gotten this far without really mentioning the show’s ostensible lead, James Franco, returning in his dual role of twin brothers Vincent and Frankie Martino, and that’s because while Franco is effective enough in both roles — this year you can tell them apart because screwup brother Frankie has a closer-cropped haircut, while Vincent is still rocking locks — his storyline is the farthest from the evolving sexual power dynamic that is the show’s central subject. Vincent has delegated the Hi-Hat to Abby, opened a disco, and continues to supervise his brother-in-law (Chris Bauer)’s massage parlor and the peepshow, both of which are facing increased competition thanks to the lax enforcement on the Deuce, a scenario Vincent’s Mob patron Rudy Pipilo (Michael Rispoli) is not able to appeal with the capo di capi.

That’s the paradigm Vincent’s protege Paul (Chris Coy, the show’s warmest and most sympathetic performer) seeks to break by striking out on his own with a high-end cabaret supper club, without Rudy’s money or protection. Though Rudy initially gives his blessing, it doesn’t take a crystal ball to see that Paul’s improving circumstances are, like the girls’, likely temporary.

Overall this is the same show as season 1, only stronger, having gotten past the initial throat-clearing and stage-setting of last year, and with the performers comfortable in their roles and the writing staff — led by David Simon and George Pelecanos — into the real meat of the story. As with the pair’s prior collaboration, The Wire, the attention to detail and realism really makes the show sing — in particular, its staging of nightlife scenes stands out against the usual phony people-speaking-in-normal-tones-in-a-supposedly-deafening-room as particularly well-observed. And, of course, literally everyone is smoking in literally every scene, just like the 1970s I remember. The Deuce isn’t a particularly nice place, it’s grimy and violent and crime-infested and riven by police corruption and casual cruelty, but it’s worth visiting — there are some really interesting people there.

Season 2 of The Deuce premieres 9pm Sunday on HBO; all season 1 episodes are available on-demand.