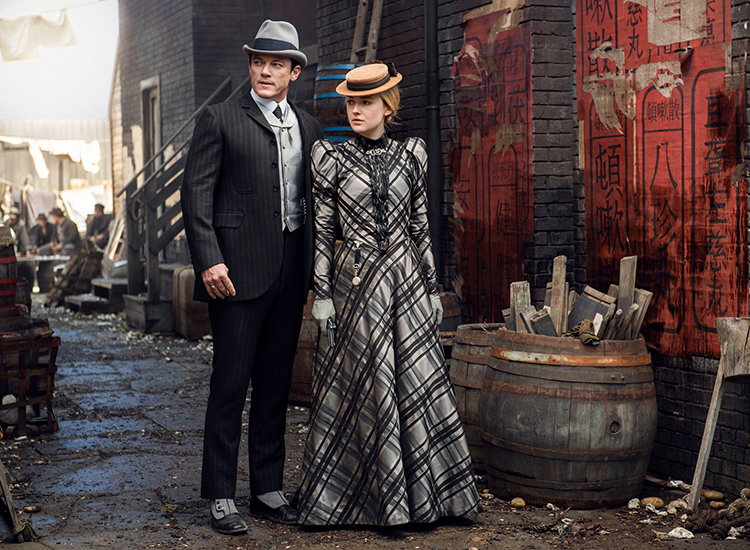 Based on the second book of Caleb Carr’s “Kreizler Series,” The Alienist: Angel of Darkness premiered last night with back-to-back episodes on TNT. Like its first season, the show features stunning production design and costuming that you can’t look away from, along with some seriously macabre imagery that might make you wish you had.

Picking up two years after the events of The Alienist, the new season finds our trio of protagonists moving on from the disturbing events of the first season. Sara Howard (Dakota Fanning) has started her own detective agency, but her gender relegates her to cases like the mystery of the missing silverware. John Moore (Luke Evans) is a journalist at the New York Times but his new fiancee hopes to bring him into the fold of the New York Journal, where her father is publisher. And the renowned Dr. Lazlo Kreizler (Daniel Brühl), well, he’s still fluttering around the edges of high society, needling the gasbags and defending the dispossessed.

With the characters already established, the show plunges right into the story, which opens with an innocent woman being sent to the electric chair — a newfangled execution method that we’re assured is “considerably more humane” than hanging — after she’s falsely accused of murdering her baby. Naturally, our heroes are incensed, and when the infant of a Spanish diplomat also goes missing, they’re summoned to uncover the larger mystery surrounding the disappearances.

Related: The 5 Most Chilling Moments from Season 1 of The Alienist

As with its previous season, The Alienist: Angel of Darkness has some of the most breathtaking sets and costumes you’ll find on television (or film, for that matter). At one point, a character refers to Sara Howard as “exquisitely attired,” and he’s absolutely spot-on; while Howard’s outfits are never short of jaw-dropping, Moore is also impeccably tailored, and the entire show features costumes and sets that render New York’s gilded age in vivid detail (the show’s website features a very cool interactive feature that contrasts New York’s streets then-and-now).

However, even though the first two episodes of its second season feature more scenes set during the daytime, The Alienist remains extremely dark in its tone. This is the type of show where even the image of a cooing baby can invoke a lurking sense of dread, and the powers that be — the police, newspaper magnates, and public intellectuals — are all either complicit in or indifferent to corruption.

The righteous indignation that fuels the central characters feels more timely this season, as issues around women’s rights takes center stage (Elizabeth Cady Stanton appears to be filling the Teddy Roosevelt role of noted real-life historical figure as supporting character). Along with a police force that remains violent and crooked, there’s a verisimilitude to the themes that, given recent social unrest, serves as a poignant reminder where we have and haven’t made progress in the past 120 years.

With a compelling whodunit couched inside a period setting that’s not often depicted, The Alienist will appeal to those interested in historical fiction, as well as fans of grisly true crime tales. As the duality in its name suggests, Angel of Darkness will take your breath away, for reasons both beautiful and terrible.

The Alienist: Angel of Darkness airs back-to-back episodes Sunday nights at 9pm ET on TNT. The entire first season is also available on Sling On Demand through July 27.