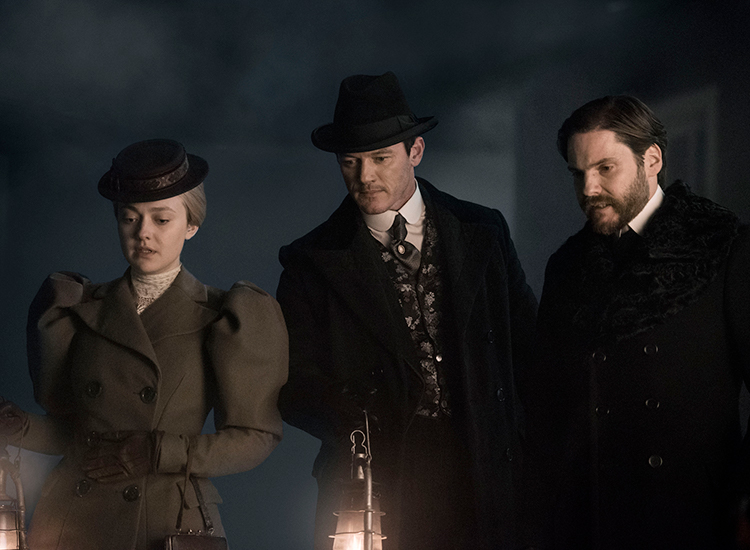 If you haven’t stopped thinking (or having nightmares) about The Alienist since the season finale, it’s time to steel yourself: Season 2 is coming.

Between the serial killer on the loose, a police department rife with corruption, and three protagonists with strong convictions but little experience, I think it’s safe to say we were all strapped in for a rollercoaster ride from the start. But were we prepared? Probably not.

This time, fans, we know what’s coming (well… sort of). The Alienist: Angel of Darkness drops Sunday July 19 on TNT, with back-to-back episodes airing each week. To get you ready, I say we dip our toes into 5 of the most chilling moments from Season 1, which is now available in its entirety with Sling On Demand. Warning: Spoilers ahead.

Shooting at a Shadow (Episode 6)

It was a classic horror movie scene: As girlishly-clad Stevie played bait, the two men tasked with watching him seemed to be distracted. His predator was closing in. Then a slight moment to breathe as the killer walked away, allowing the plan to come together again. But before anybody could get within spitting distance, he was fleeing through the dark and crowded city street. And that's where the real fun began.

Split apart from the group and bumbling through the inky underground with only a match to guide him, Detective Marcus Isaacson was hunting on a hope and a prayer. The killer could have been lurking in the black, waiting to leave him in the same state he left Cyrus — or worse. It was so close to being the classic horror scene where you’re yelling to “Just turn around! Run away!” while the killer predictably steps out of the shadows and slaughters the poor protagonist.

And then… he didn’t. Marcus emptied his gun down the hallway, and that was that. The killer got away, and we got to slowly let out the breath we hadn’t realized we were holding in.

Chloroformed Over an Egg Cream (Episode 7)

For a newspaper illustrator, John Moore put pretty big target on his back. He took his drugging and rape at the brothel in (relative) stride, and impressed me early when he didn’t let the risk of humiliation keep him from sharing the information that he had learned there. In fact, he didn’t even let it prevent him from going back and befriending young Joseph in order to learn more.

When he returned to the café where he had once met Joseph and purchased an egg cream from the complicit barkeep, presumably for Joseph to drink if he arrived, a man stepped out of nowhere with a rag of chloroform — and it was lights out for our dear artist.

He wasn’t in a dark alleyway or a seedy bar: he was in a café during complete daylight. And yet I completely expected the next scene to be a shot of his corpse, slain by the hands of an unknown killer. The false security of his circumstances was made even more baffling by the fact that the next face we saw was that of Dr. Kreizler, with no attempt to explain why or by whom John had been chloroformed. And if that’s not chilling, I don’t know what is.

Mystery Ambush in the Mountains (Episode 8)

The ominous pan over an eavesdropping stranger on the train certainly didn’t bode well for Kreizler and Moore’s trip to the mountains outside D.C., but it was still hard to see this one coming. With all of the politics and shady dealings at play, a stern talking-to in New York or the thickening of the mud around Roosevelt’s ankles seemed the most likely consequence on deck.

And then a mystery gunman shot their driver, terrified their horses, and sent their carriage careening over the edge of a bridge to the sounds of shattered glass and splintering wood. Laszlo immediately started speaking like he was dying, asking John to carry on a message. The mood shifted from Sherlock Holmes mystery to wartime drama in a matter of seconds.

Luckily, the gunman didn’t follow up to confirm his kills – Kreizler wasn’t dying, Moore wasn’t too weak to help him escape, and they both made it back to a train bound for the relative safety of New York. Was the immediate danger past? Sure. But now, the violence could come from anywhere, not just the hunted…

I think we were all wishing this one wouldn’t happen. Mary had the knife, she had the passion, and she had the history of blinding rage that I personally was hoping she would tap into to leave Connor in a crumpled heap on the floor. The hogtied helplessness of watching her run silently from the corrupt ex-Captain, unable to scream for help — coupled with knowing that her only backup was the still-injured Cyrus and the boy ward Stevie — was torture in itself.

Connor was bigger than her, to be sure, but Mary was putting up a damn good fight; she landed that first slash of the knife and it seemed possible that this could be a rare win for the good guys. And then the railing broke.

The camera angled to show the twisted bend of her arm across her chest, and her open eyes staring into nothing. It was a quick conclusion to a short burst of hope in a dismal situation. Of the many innocents fallen to the cruel hands of fate in this show, Mary was the first whose death didn't actually feel fated. She wasn’t on the short list of the serial killer or in the path of brutality by way of her profession; she certainly deserved better than what she got at the hands of a violent coward.

Brink of Betrayal at the Finish Line (Episode 10)

Mary’s murder was the spark that lit the fuse, and our ragtag amateur investigators seemed to be barreling toward the justice they sought. The police were veritably in their dust, Kreizler’s mind was his own again, Sara had served up almost all of the puzzle pieces they needed, and the man at the root of it all was finally in their sights, literally. Even Joseph had somehow escaped a mauling.

Then that bastard walked back onto the scene. Connor could have been a force for good, an ally, but the look on his face cemented his earlier convictions to share none of the glory with anyone not on the police force – despite the fact that now included him, as well. It was a fight between a spiteful man with a gun, a cripple, and two unconscious bodies.

Sara walked onto the scene, seemingly holding nothing more than a purse. After how she had handled her previous encounter with the unemployed ginger, it didn’t seem promising that she would bode much better here. Connor announced his intentions to frame himself as the hero and it seemed no longer a question of how they would defeat him, but how many – if anyone – would survive.

My heart was resolving itself to the bloody but inevitable “fighting in a basement” Inglourious Basterds massacre vibe that was pouring off of this scene – and then Sara, ever the resourceful one, gave us the sweet justice we had been longing for all season.

I cannot wait to see what sort of hell she raises this time around.

The Alienist: Angel of Darkness returns with a special 2-hour season premiere this Sunday, July 19 at 9pm ET. The full first season is available now on Sling On Demand.