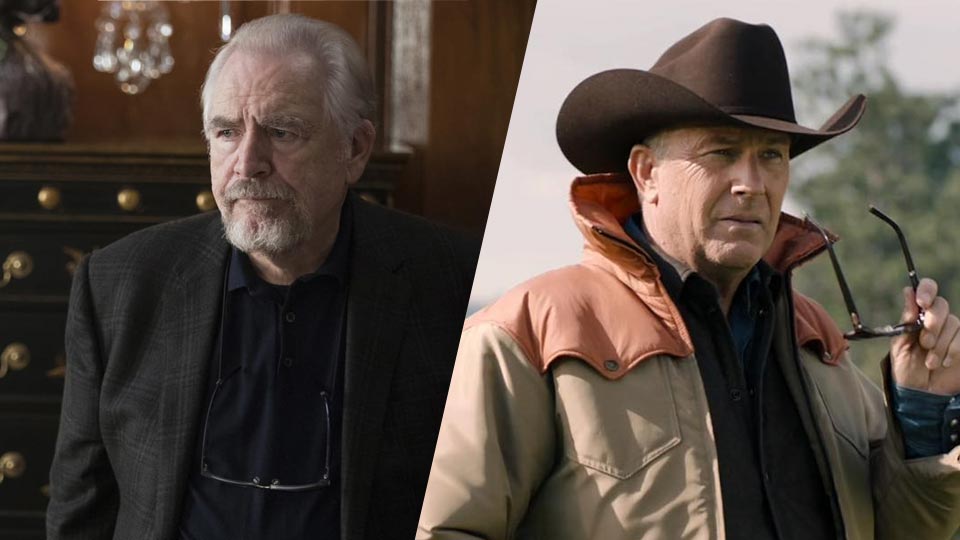 With so many great new shows coming down the pike, not to mention all the not as new ones that you’ve been meaning to catch up on, we’ve occasionally got to economize, to look for inefficiencies, to ensure that we are getting the most from our TV at any given time without letting it blot out mundane concerns like eating, sleeping, and earning a living.

In that spirit, we couldn’t help noticing more than a few similarities between a couple of new shows: Succession, airing Sunday nights on HBO, and Yellowstone, Wednesdays on Paramount. It’s not a knock on either, because we like both, but they could easily share one logline: An aging patriarch at the head of a large, lucrative concern grooms his adult children to take over the family business after he’s gone.

So if you only have one hour a week to give to a Lion in Winter-inspired premium drama, which one do you choose? As with most anything worthwhile, it’s a matter of taste, but there are a few points of differentiation that might help with the decision.

Yellowstone’s biggest selling point is Kevin Costner, in his first television role, as John Dutton, the strong, gentle, nigh-infallible proprietor of Yellowstone Ranch, doing his best to impart his lifetime of hard-earned wisdom to his four very different children. Dutton is introduced in the pilot’s cold open after having been in a car crash while towing a horse trailer, and realizes he has to put the injured horse out of its misery, which he does quickly, compassionately, and with a clear implication that it’s not the first time he’s had to do something like this and won’t be the last. Dutton is fond of saying that he “runs the valley,” whatever that means (it appears to include a friends-with-benefits relationship with the governor), and his kids are desperate for his approval, if not all for his job. Costner is perfect for the role and is clearly relishing the chance to play such a bootstrapping American archetype, complete with flawlessly fitted Stetsons and a variety of flattering work jackets. I’m sure Dutton will get a little dirt on him as the series progresses, but at the outset he’s the closest thing to an American saint on television since Michael Landon.

By contrast, never-not-great veteran character actor Brian Cox plays Logan Roy, founder and CEO of media and entertainment conglomerate Waystar Royco, is presented as a shrewd, ruthless, highly successful businessman, but far from the generous, loving father figure Dutton presents, playing his four progeny against each other, second-guessing their choices, and generally just behaving like a miserable bastard, even before the (light spoiler) stroke that sidelines him at the end of the pilot.

Both shows feature four adult children jockeying (or not jockeying, which some may read as its own form of jockeying) for position in their father’s empire, and the similarities continue in rough outline: the oldest son in both families is not particularly interested in a bigger role, the second son has assumed the role of heir apparent, the daughter (third born in both cases) has left the organization to make her own way but is open to returning, and the youngest son is a bit of a wildcard.

Yellowstone features Dave Annable as Lee, the oldest Dutton and the most natural-born cowboy with little interest in anything more; Wes Bentley as Jamie, whose law degree and business aspiration make him the most logical heir, despite his ill-fitting ranchwear; Kelly Reilly as Beth, the embittered daughter who seems to value proving her toughness above all else; and Luke Grimes as Kayce Dutton, the prodigal son with divided loyalty between his Native American wife and her tribe, and his estranged family.

Succession, for its part, features Alan Ruck (Ferris Bueller’s Day Off) as Connor, the oldest Roy and the one who professes to have no interest in the family business; Jeremy Strong as Kendall, who has been groomed for this life and who, as the series begins is about the be announced as Logan’s successor, though Logan has clear misgivings; Sarah Snook as Siobhan (or “Shiv”), who’s left Waystar for a career as a political consultant; and Kieran Culkin as Roman, the youngest Roy, who desperately wants the affirmation of being the boss but has little interest in — indeed, has contempt for — doing any of the work.

The great thing about both of these casts is that most of the performers, Costner and Cox obviously excepted, are unfamiliar to me, which I find helpful in buying their performances, and most of them acquit themselves quite well. I must say, though, I am not a fan of Kelly Reilly’s performance in Yellowstone; she is playing one character trait — petulant — like Will Ferrell played that cowbell.

Interestingly, though both shows are about families with near-limitless wealth, they both eschew the Billions approach of having at least one scene of ostentatious consumption per episode. Succession takes place almost entirely in offices and dining rooms, which eventually takes on a claustrophobic feel, while Yellowstone indulges in shooting outdoors as often as possible, making the show a feast for the eyes even when it’s just two characters talking.

REVIEW: ‘Yellowstone’ Could Be the Biggest Thing on TV

While both shows concern the wrangling over massive self-made fortunes, there is a gunfight that ends with two deaths just in the pilot of Yellowstone, while Succession’s characters seem to be satisfied to undermine each other through dirty tricks and cutting one-liners — an area in which all the Roys excel.

If you like your drama leavened with some humor and a dollop of outright satire here and there, Succession has the clear edge, coming as it does from producer Adam McKay, who’s best known for writing and directing Will Ferrell comedies, but who ventured into weightier material with 2015’s The Big Short (a very funny movie in the places where it’s not crushingly depressing) and continues in that vein here. Yellowstone, by contrast, plays things straight pretty much across the board.

This one is a bit of a split: I thought Yellowstone’s opening credit sequence was visually terrific, recalling the great sequence of True Detective season 1, but its theme song is forgettable. Whereas, the visuals for Succession are nothing special, but its theme song has been stuck in my head since I watched the pilot.

In Yellowstone, one of the characters accidentally finds a fossilized dinosaur on his property.

Succession is great. Really, really good. But does it have dinosaurs? No, it does not have dinosaurs, and I suspect that for some, this will be the decisive factor. Either way, you can’t really lose!

New episodes of Succession air at 10pm ET on HBO; all episodes of each are available On Demand.