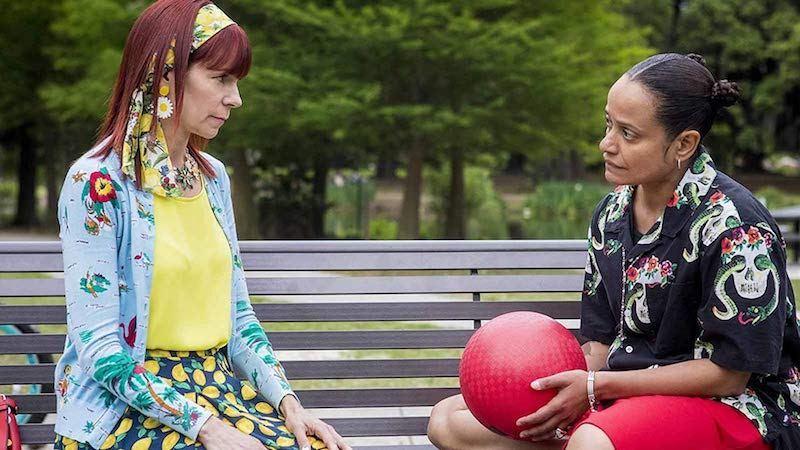 TNT’s summer smash hit Claws, which returns for its third season June 9, is defined by its strong female ensemble cast; the relationships between this crew of morally malleable Miami manicurists (sorry) are palpable, lived-in, affecting, and real. We got the chance to pop a few questions to Carrie Preston, who plays Polly, the nail tech with a rap sheet and a tendency to invent stories of a rich and famous past life, and Judy Reyes, who plays the salon’s aptly named bouncer, Quiet Ann, who’s grown uncomfortable with the rising ambitions of the crew’s leader, Desna (Niecy Nash). Answers have been lightly edited and condensed for clarity.

Sling TV: Carrie, Polly seems to be the most fun character to play on the show, and particularly suited to your talents. Did they have all the sort of persona-shifting on the page when the role came to you, or is it something they saw in you?

Carrie Preston: In the pilot, Polly has just gotten out of prison for identity theft on seniors. She is downtrodden and depressed on the inside, but on the outside she is all sugar, smiles and lies. I found this an interesting and really exciting scenario to play. When I spoke to the creative team about taking on the role, I suggested that not only does she steal credit cards and identities, but that she also steals people’s personalities. So as we got into the meat of the season, they gave me creative license to bring in whatever persona I wanted. It’s special to have that kind of creative freedom and to be totally on the same page with the writers and producers.

Sling TV: Do you see Polly as having multiple personalities, or is she just kind of a weirdo who’s a great mimic?

CP: I see Polly as a survivor. She pathologically lies by pretending to be other people in order to cover up the deep wounds of her past. But a lot of the time she believes that the lies are actually a reality. Sometimes she doesn’t even know that she is lying, nor does she realize her lies are being detected because when someone confronts her with the truth, she comes up with another personality to hide behind. So we don’t ever really know the truth of who she is, which keeps her very interesting, in my opinion.

Sling TV: On the surface Polly seems to be the flightiest member of the crew, but when the chips are down she seems to be able to flip the switch and handle business. Do you think those qualities are related to one another?

CP: She is very, very smart. She knows that appearing innocuous on the surface makes her the least likely to be suspected when she goes lawless on a thing.

Sling: The old cliche about actors is that they scan a script for their lines and ignore the rest. So, Judy, what made you want to play a character named Quiet Ann?

Judy Reyes: I suspect that that cliche applies more when you already have the job!  In the Quiet Ann case, the sides were great, which made me immediately want to read the entire script.  Eliot Laurence, the creator, is a genius. The characters were so distinct, real, the world so alive and unique yet completely familiar, and though Ann is “quiet,” she was a part of all of it.  And, unlike anything I’ve ever played. I recognized Quiet Ann, if that makes any sense, and was eager to create her as I saw and knew her. I did go to my acting coach to make sure I was being authentic.

Sling TV: Are you quiet when you’re not on camera?

JR: I’m not sure I’m the one to ask.  I do certainly have my moments. I find myself hanging back drinking in the on- and off-camera fabulousness of this entire cast that I’ve fallen madly in love with.

Sling TV: Can you both talk a little about where we left your characters at the end of Season 2, and where we find them in season 3?

CP: Toward the end of the season, Polly had a psychological break and started seeing and talking to her twin sister, who it turns out had died when they were kids. So she checked herself back into the hospital for treatment. Season 3 is very much about the ramifications of power, and Polly is dealing with that just as much as the rest of the ladies.

JR: At the end of season 2, Ann is completely broken hearted because of her breakup with Arlene.  And she struggles with her loyalty to Desna and Desna’s relentless pursuit of the boss-dom, especially when she has to exercise her role as the muscle and protector of the group.  This season that struggle is intensified with the acquisition of the casino. And, she’s back together with Arlene, which opens up a whole ‘nother bag of chips I’m not allowed to spoil.

Sling TV: On the surface Polly seems to be the flightiest member of the crew, but when the chips are down she seems to be able to flip the switch and handle business. Do you think those qualities are related to one another?

She is very, very smart. She knows that appearing innocuous on the surface makes her the least likely to be suspected when she goes lawless on a thing.

Sling TV: Judy, The episode you narrated last season from Ann’s POV  was one of the best of the whole series, and Virginia narrated the finale. Should we expect more episodes like that? Not necessarily just about Ann, or narrated by one of you, but episodes that focus on one character in order to broaden the world the show is building?

Thank you!  There won’t be narrations this season, but I think it’s because of those episodes that there definitely will be episodes this season focusing on each of the women individually, just as in last season.  We’ll be spending time getting to know the women through the season as well in a way we hadn’t seasons prior. Quiet Ann goes through a lot this season!

Sling TV: What is your favorite thing about working on Claws?

CP: We shoot in New Orleans, which to me is one of the best cities in the world. That, and working with the incredible cast and crew!

JR: There are so many things I love about working Claws!  But abso-f**king-lutely my favorite is the incredibly strong, talented, smart, hilarious, gorgeous, thoughtful and kind and diverse group of women I’m honored to work with.