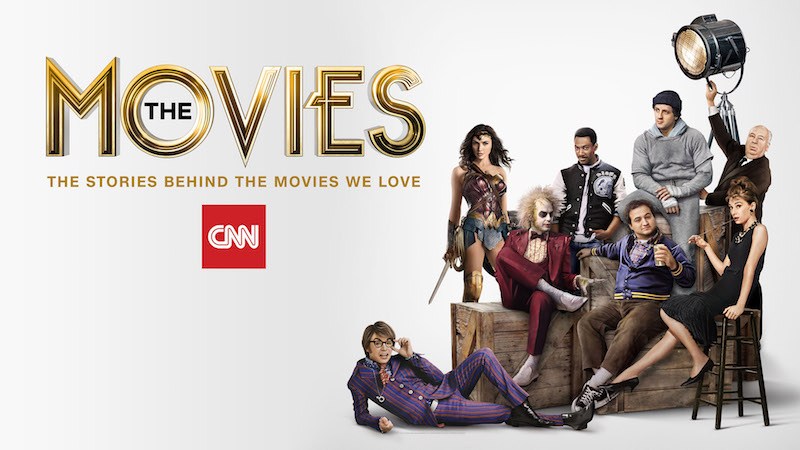 CNN’s new six-part documentary The Movies — from the same team that brought you all those historical decade recap shows The Seventies, The Eighties, etc. and with a similar approach — escorts viewers through each decade of American cinema, highlighting the talents, curious subgenres and cultural touchstones in each. Each episode is packed with commentary from some of the industry’s biggest names, both the people who made the decade and a few who were formed by it.

As anyone with a brain can tell you, the seventies were the greatest decade in the brief history of American moviemaking. As such, the premiere episode, The Eighties, couldn’t help but feel like a bit of a letdown — but to dismiss the eighties wholesale would be lazy and dumb. Though the eighties in many ways sowed the seeds for the rough patch in which we are currently mired, the decade brought with it an important explosion of talent and movements in film that resonates today, as well as a ton of great movies.

The Holy Trinity of The Eighties had to be Steven Spielberg, Tom Cruise and John Hughes, each of whom defined the pop culture terrain in their own ways. Spielberg, who by then had already established himself by essentially inventing the summer blockbuster with Jaws, opened the decade with two monster hits: Raiders of the Lost Ark and E.T.: The Extra-Terrestrial, but his influence was far wider in scope. He also produced Poltergeist, Gremlins, The Goonies, Back to the Future, and Who Framed Roger Rabbit? — was there no end to the number of children he put in peril? There was simply no avoiding him at the box office.

Cruise burst onto the scene in 1983 with Risky Business, which has to stand as the greatest film ever about a suburban teen who opens a brothel. It’s funny and sexy (for men of a certain age, Rebecca De Mornay changed the way we viewed the world) and Cruise is the All-American Dream, but it’s a film with a dark heart that explores the uglier impulses of the human spirit and the tragically transactional nature in which so many people engage one another. Once he established himself as a box office force, “Cruise has a very specific agenda… working with the best directors he can find.” He “found”, in short order, Ridley Scott (Legend), Tony Scott (Top Gun), Martin Scorsese (Color of Money), Barry Levinson (Rain Man) and Oliver Stone (Born on the Fourth of July). It was a template that Leonardo DiCaprio would follow two decades later.

In summing up the career of John Hughes, Julia Roberts asks “How does this grown-up know everything about all of us?” It was a question every eighties teen no doubt contemplated. Hughes, better than perhaps anyone ever, plumbed the depths of the adolescent psyche, dredging up the nastiest bits for inspection while somehow managing to make us laugh and ultimately assure us that we’re all damaged and that everything will be fine. Probably.

While there are several others who loomed large over the era — Stallone, Schwarzenegger, Harrison Ford — a special shoutout has to go to Rob Reiner, whose work is mentioned but, even as you watch The Eighties, feels overlooked. The first five films of his directorial career, all of which came out between 1984 and 1989 were This Is Spinal Tap, The Sure Thing, Stand By Me, The Princess Bride, and When Harry Met Sally. That is a ridiculous streak of high-level filmmaking, including two stone-cold classics, and all of them the kind of film you’ll tell your kid, “Oh, yeah, you should definitely watch that.”

What makes The Eighties truly interesting is the way in which it calls out nascent trends that we now take for granted as classic tropes: the rise of the Saturday Night Live alumnae as movie stars; how before the 80s, you almost never saw leading men shirtless; the dystopian nightmares of Blade Runner, Brazil, Escape from New York, Mad Max, and Robocop; greed — as Jason Bailey says, “It really was a decade that was fueled by ‘How much money can I make and how can I display it best?’” an ethos that was encapsulated by films like Scarface and Wall Street; and Vietnam guilt, exemplified by Good Morning Vietnam, Full Metal Jacket, Platoon, and Born on the Fourth of July. America hadn’t yet reconciled with its treatment of Vietnam veterans and “there was an atonement for that in the 80s, there was a second wave of pictures that I think attempted to honor the service that these men had performed for their country,” says critic Stephen Metcalf.

And then there’s the rising stars of the time — Soderbergh, Coen & Coen, Jarmusch, Van Sant and Lee — who today are regarded as masters of their craft, the kind of people with multiple entries in the Criterion Collection. Despite the dominance of the blockbuster, each of these men managed to elbow there way into the cultural landscape with distinct voices that will ring true for generations.

Watch The Eighties on demand and catch The Nineties at 11pm ET Saturday, July 27 on CNN, and watch a selection of the movies discussed in each on the MyTV tab.