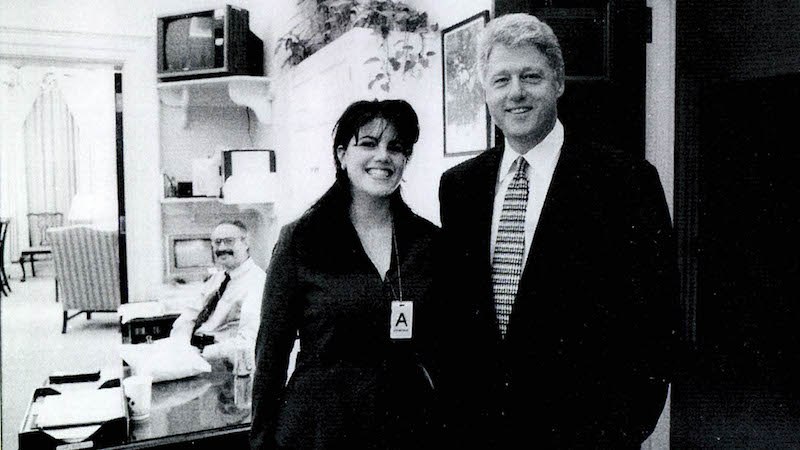 With the near-constant speculation about whether there might soon be impeachment proceedings against the president for his various alleged misdeeds, as well as the ongoing reverberations of the #MeToo movement in the context of our national leaders, it is natural to think back to 1998 and the scandal that had both: President Clinton’s affair with former White House intern Monica Lewinsky, which led to his impeachment, only the second in American history. (Andrew Johnson was the first; Richard Nixon resigned before proceedings could begin.)

Getting Lewinsky on camera to discuss her ordeal is a huge coup for this production, as she has never spoken publicly about it in any sort of detail, and her retelling of these huge, high-stakes events as she perceived them at the time — first as a smitten young woman barely out of college, nursing fantasies (very much encouraged by Clinton) that there might be something real between them, then as a frustrated, semi-scorned lover demanding to be taken seriously, and finally as the deeply betrayed, thoroughly terrified target of a federal investigation.

The film carefully puts its events in sequence and in context, beginning as Clinton was becoming a nationally known politician, through his (and the future First Lady’s) weathering of the revelation during the 1992 campaign that he’d been unfaithful, into the marked polarization of the two political parties that greeted his election (“When Democrats lose an election, they get sad; when Republicans lose, they get mad — and when they’re mad, there’s payback” it’s sagely observed), followed by the march of Republican-led investigations into both Clintons’ alleged misdeeds, setting the stage for Paula Jones’ sexual harrassment suit, and opening the door to questions about a young White House staffer.

To its credit, the doc never flinches from whether Clinton actually did what Paula Jones, Kathleen Willey, and Lewinsky accuse him of (he’s publicly only admitted to Lewinsky’s charges), presenting each woman’s account without any effort to cross-examine it. Whether or not you think he should have been impeached over it, it’s clear enough that the president behaved selfishly and recklessly, bringing great pain to at least four women and, it’s implied, many more we never hear about.

The contours of this story are well-known to those of us who remember living through it in real time, but again, the addition of Lewinsky’s voice makes it feel like it’s finally being told as completely as it can be told. (I think we can all agree that neither Bill nor Hillary Clinton is likely to comment any further on this matter anytime soon.) It’s striking how emotional Lewinsky gets even twenty years later, particularly as she describes her dawning realization of how thoroughly her trust was betrayed by her confidant, Linda Tripp, and the night the FBI held her in a hotel room and pressed her to wear a wire and record phone calls to implicate the president and his inner circle. Hindsight being 20/20, she is also clear-eyed about what drew her to him in the first place:

“I don’t talk about this very often and I still feel uncomfortable talking about it because I think it’s one of those things where it’s not as if it didn’t register with me that he was the president. Obviously, it did. But I think in one way, the moment we were actually in the back office for the first time, the truth is I think it meant more to me that someone who other people desired, desired me. However wrong it was, however misguided, for who I was in that very moment at 22 years old, that was how it felt.”

Twenty years is a long time, and in the modern news cycle (which this matter helped give birth to) it feels like an eternity. But given the persistence of the issues involved — sexual politics, abuse of power, obstruction of justice, political vendetta, and presidency under seige — the time is right to revisit this story, whether you think you remember it or not.

The Clinton Affair airs over three nights starting November 18 on A&E, and will be available on demand.