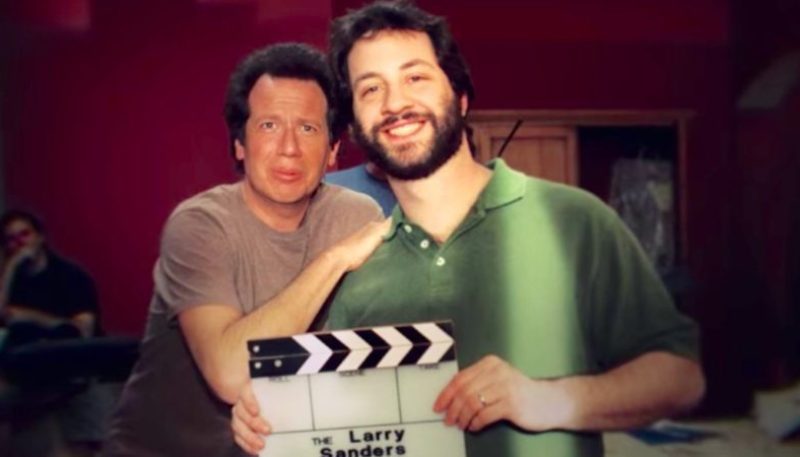 When you think of the most influential comedians of all time, who comes to mind? Richard Pryor, George Carlin, Woody Allen, Steve Martin, Joan Rivers, Monty Python…. For most of us, the list would be pretty long before it got to Garry Shandling, who died two years ago of a heart attack, and is the subject of HBO’s terrific new two-part documentary, directed by his protege Judd Apatow (who would likely have his own spot on that list), The Zen Diaries of Garry Shandling.

But the film is a very welcome reminder not only of how funny Shandling was on stage as a standup, but that, as Apatow says, “Most of modern comedy originated with Garry.”

Raised in Arizona, Shandling abruptly dropped out of engineering school with the idea to become a comedy writer. After writing three monologues, submitting them to George Carlin at a comedy club and getting encouragement from the comedy legend, Shandling moved to Los Angeles in the mid-’70s and was soon an in-demand sitcom writer working on shows like Sanford & Son and Welcome Back, Kotter. But, in a pattern that would repeat itself throughout his life, Shandling bored quickly, and felt he could not only express himself better, he could figure out who “himself” is in the first place, if he tried stand-up comedy.

Shandling’s deliberations about these major life changes can be traced, in detail, through the journals he kept throughout his life (and to which the title refers), and Apatow liberally sprinkles the film with passages from the journals that, even if you never heard of Garry Shandling, would be of interest to anyone struggling with the human condition and looking for proof that a) we’re all going through the same things and b) that wild success can come out of it, if you channel it correctly.

In addition to Shandling’s journals, Apatow has a wealth of home video, outtakes from Shandling’s shows, televised interviews, and remembrances from friends Jay Leno, David Duchovny, Jon Favreau, Jim Carrey, Ben Stiller, Sarah Silverman, and others to follow Shandling from sitcom writer to Comedy Store fixture to favored guest, and eventually permanent guest host on The Tonight Show starring Johnny Carson, and then through his two hugely influential television projects: the gleefully meta sitcom It’s Garry Shandling’s Show (from which writers and future Simpsons showrunners Al Jean and Mike Reiss freely admit to having borrowed ideas) and, after turning down the opportunity to take David Letterman’s place at Late Night on NBC, the behind-the-scenes comedy The Larry Sanders Show, which pioneered the single-camera format for idea of celebrities playing caricatured versions of themselves and featured a loaded cast that included Rip Torn, Janeane Garofalo, Jeremy Piven, Bob Odenkirk, Sarah Silverman, and Jeffrey Tambor.

After that, Shandling tried his hand in features, and when that didn’t quite pan out, he went back to standup (backstage and onstage footage of Shandling, Jerry Seinfeld, and Chris Rock performing and watching each other perform at the same club around this time is particularly compelling) and focused on spirituality. It’s a fascinating journey, whether you’re a longtime fan or not familiar.

Side note: All of The Larry Sanders Show is available on-demand on HBO, and I absolutely cannot recommend it highly enough. Hey now!

The Zen Diaries of Garry Shandling airs March 26 and 27 on HBO, and will be available on-demand.