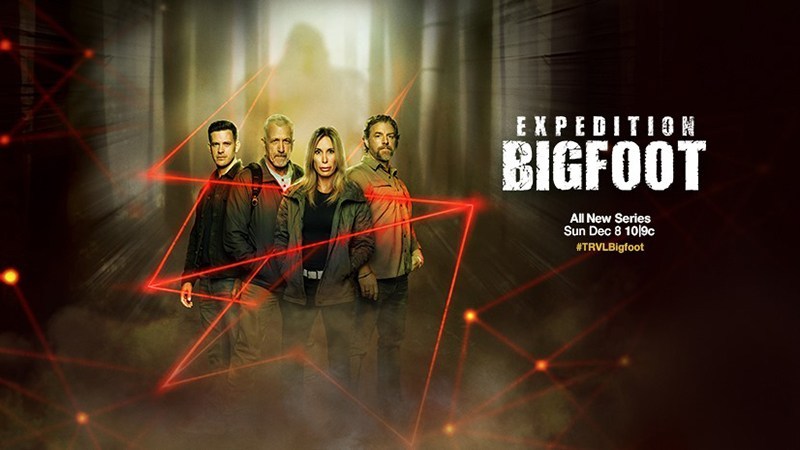 Bryce Johnson has been a working actor in Hollywood for two decades, appearing in all manner of TV shows and feature films. One of the projects of which he’s most proud is Willow Creek, a film directed by Bobcat Goldthwait. Johnson stars as a bigfoot-obsessed man who goes camping with his girlfriend in the woods of Willow Creek, California, the location of the famous Bigfoot sighting that launched the man-beast into the pop culture stratosphere. Not only was the film the apex of Johnson’s acting career, it was, up to that point, the apex of his lifelong obsession with Bigfoot. But now his passion for Bigfoot has reached new heights with Expedition: Bigfoot, the new documentary series from the Travel Channel.

Johnson has assembled a team to help him scour 90,000 acres of forest – roughly the size of Philadelphia — in central Oregon, using state-of-the-art technology to locate the elusive creature. Joining him are veteran Bigfoot hunter Ronny LeBlanc; famed anthropologist Dr. Mireya Mayor, who put herself through college working as a cheerleader for the Miami Dolphins before earning a Fulbright and later co-discovering a species of mouse lemur that is the world’s smallest primate; and Russell Acord, an ex-military survivalist who is also the author of the Bigfoot trilogy Footprints of a Legend. Sling recently spoke with them about their upcoming show, which premieres December 8 at 10pm ET on the Travel Channel.

What sets this expedition apart from others you’ve been on in the past?

Ronny LeBlanc: The length of time, focusing on a hot spot where there’s a reduced human footprint, so you’re not worrying about any issues like that. Just surrounded by the team and the technology and the focus of looking to capture evidence to help prove that this exists, that this is a real thing.

How did Dr. Mireya Mayor get involved?

Bryce Johnson: We were familiar with the work of Dr. Mayor and it was a no-brainer to bring her on, seeing as how she had already discovered a species of primate, obviously what we’re looking for is known to be a primate, so it was really a benefit to be able to have somebody with her, not only scientific expertise, but her willingness to get into an undisclosed location and spend a good quality amount of time there.

Mireya Mayor: So, I feel like this expedition, I’ve been training for it unknowingly for my entire career. I spent nearly two decades in search of rare and elusive primates in deep remote jungles around the world and even made a scientific discovery of a species of primate in Madagascar several years back, so I’m very open minded. And to me what was most compelling was the fact that we have more than 10,000 modern-day reports of this animal. I knew that all you needed was for one of these reports to be true for it to be a worthwhile investigation. I’m a firm believer that we don’t have all the answers, that we don’t know everything that’s out there. And so there’s a possibility there could be an animal, that has been described this many times, out there that we still haven’t scientifically proven. In the same way that mountain gorillas had been proven to exist only as recently as 180 years ago.

How is something as big as Bigfoot so elusive? And how can it propagate with presumably so few potential suitors?

Mireya Mayor: What I can relate it back to is my personal experience with gorillas in the Congo that live in incredibly dense vegetation. I have been standing not only next to a 400-pound silver back, and I’m talking literally three feet away from me, and not know it, but I’ve also been standing next to an entire group of these gorillas and they go completely unnoticed. So, the idea that an animal this big could be that close by and remain unseen is actually not that strange to me. Particularly if it’s true that they are in fact nocturnal, particularly if it’s true that it’s very advanced in its thought process in the way that primates are known to be. These animals can very much adapt to these environments and stay highly camouflaged in ways that I think it’s difficult to understand because we think of ourselves as smarter and superior, and the truth is there could be an animal out there outsmarting us.

The terrain of Oregon kinda screams Bigfoot, but what else led you there?

Bryce Johnson: Part of what makes this expedition different from others is, you know most people go about the business of finding bigfoot after the fact. For instance, if an eyewitness reports a Bigfoot sighting or if a researcher finds a trackway, they’ll go to that location and start an investigation after Bigfoot’s already been there. So really, what sets this apart was to get there before Bigfoot got there. We used an algorithm and we hired a data analyst to sort of collate these recent sightings and find these different patterns and what it spit out were these certain hotspot locations in North America, and one just sort of screamed out more than any other. Not only did it give us a location, it gave us a certain time window to give us the best chances to run into Bigfoot and that’s really what led us to that location in central Oregon. And all I can say is it absolutely worked.

How did this obsession with Bigfoot start for you, Bryce?

Bryce Johnson: Like so many other kids around the world, for me it started by going into the library and taking out a book that had Bigfoot on the cover and that started an endless fascination for me personally. But it was really when I saw In Search Of, with Leonard Nimoy, when they did an episode on the Patterson-Gimlin footage, that I saw that creature walking across the sandbar and I just had a gut feeling that I was staring into the eyes of something I wasn’t supposed to be staring into the eyes of. And it led me down a path of figuring out what that was that they captured on film that day. And through my own research, I just know that it wasn’t just a man in a suit and that it was the same creature that indigenous tribes have been describing for hundreds of years. So it’s really just become a passion of mine.

How do hoaxes like the infamous 2008 Bigfoot “discovery” by Matthew Whitton and Rick Dyer affect the business of Bigfoot research?

Bryce Johnson: It’s a huge disservice to people like us who take this seriously. All it takes is one bad hoaxer or press article for people to latch onto the idea that all these thousands of reported sightings are hallucinations or outright lies. It’s a huge setback, to be honest, but it’s something we have to deal with because in this field there’s gonna be people who hoax things for profit.

Ronny LeBlanc: Just to echo Bryce’s comments, it does do a disservice. They had a CNN press conference, it does bring some awareness to it, but it really, in the end, kind of hurts some serious research that’s being conducted and things like that, just to continue putting this into the realm of myth, and it’s not. They exist, they’re real and that’s what this whole expedition was about, to showcase that and highlight that and bring that to the general public, because a lot of people need to see it to believe it, evidence-wise, so you need to provide something that’s physical to accept this.

In the first episode, Russell says that to hunt Bigfoot, you have to think like Bigfoot; how does thinking like Bigfoot manifest itself?

Russell Acord: If you’re elk hunting, you have to do enough research on elk to understand their ways of doing business. Bear hunting, elk hunting, anything where you’re looking for something. A detective will try to get into the mind of a criminal and it’s the same thing: what would I do to hide in this area? How would I feed myself? How would I get water? How can I avoid human contact at all costs? And you have to start thinking with that mindset – where would I hide? And that’s exactly where you would look if you were hunting something as elusive as bigfoot.

Are you guys at liberty to discuss your closest encounter with Bigfoot?

Bryce Johnson: I will say this: this show isn’t just for believers, this is for skeptics, as well. I think we’re excited for everybody to go on this journey with us. And encounter the type of evidence we came across. It’s really gonna leave you, if you’re a skeptic, baffled and befuddled as to why this creature isn’t on a lab table.

Mireya Mayor: I’d like to say something. When I first went in there, I was asked “Do you believe in Bigfoot?” And my response was “Ask me in three weeks.” Well, what I will say now is that my perspective and on this is completely different than when I set off to Oregon. Based on the evidence that we found and one particular video which will appear on the show, that Russell shot in the field, it’s unbelievably convincing to me that there’s something ape-like out there, far away from its home.