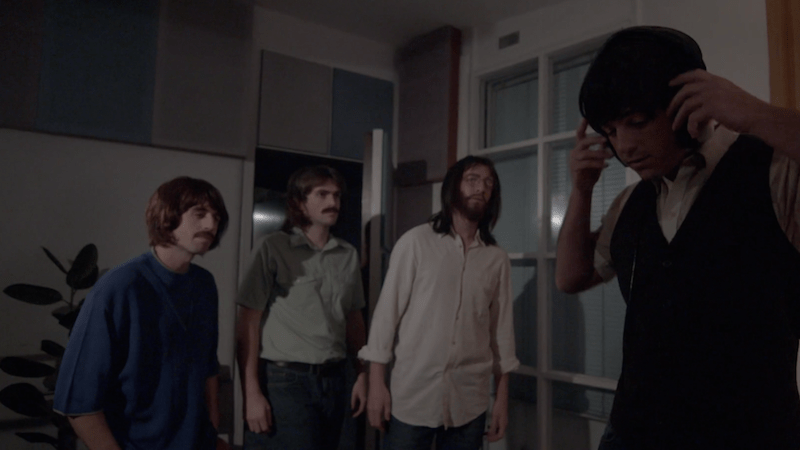 I have discovered something that is either excellent or terrible, and I can’t decide which. Is it both? Can it be both? If it can, then it is. Either way, it is marvelously amusing and interesting, particularly if you suffer from acute addiction to rock documentaries like I do.

Breaking the Band  (on demand on REELZ) combines the sensibilities of true crime and rock doc, telling the stories of how famous bands broke up, including talking-head commentary from band associates, roadies, friends, and (occasionally) the members themselves.

Sounds pretty standard, right? Nothing you haven’t seen before on VH1 in the heyday of Behind the Music. Where Breaking the Band sets itself apart is that, like the best true crime docs, it uses re-enactments to dramatize key moments.

Ever wondered what it looked like when things came to a head when John brought Yoko into the studio while the Beatles were recording The White Album? Or when David Lee Roth played his cover of “California Girls” for Eddie Van Halen? Or when Eagles lead guitarist Bernie Leadon poured a beer on Glenn Frey’s head?

Well, because Breaking the Band casts dudes that don’t look much like the guys they’re playing and puts them in hilariously cheap-looking wigs and fake moustaches, you will still be left wondering. But if you squint and lay sideways on your couch, you’ll get the idea.

Anytime they have real footage of the real people to illustrate what they’re talking about, they use that footage, and there is a surprising amount of the real music and real music videos included in the episodes. (Rights to the real music is always an Achilles’ heel for productions like this.) But when they don’t have real footage, such as in the moments mentioned above, they re-enact, and despite the high-school play look, and the fact that in the few moments the re-enactors have audible dialogue, they all appear to be hiding thick accents, the re-enactments are a surprisingly effective storytelling tool.

The show also has a house psychologist, to armchair-analyze the motivations and mental states of these musicians at a remove of 35+ years.

There are eight episodes on demand on REELZ, and like I said, though I frequently marveled at the chintzy production values, I still found them totally compelling, and they each had tidbits and details that I were new to even a seasoned rock scholar as myself. My favorite was the Van Halen episode, in part because they are one of my all-time favorite bands, and in part because it’s two breakups in one (first with David Lee Roth, then with Sammy Hagar). But the Beatles episode is amazing (the wig game is particularly dodgy here), the Eagles’ internal drama was way bigger than their mellow music would suggest, the Beach Boys were a total mess, and there are episodes I have yet to get to about Fleetwood Mac, Sonny & Cher, and NWA.

Breaking the Band is available on demand on REELZ.