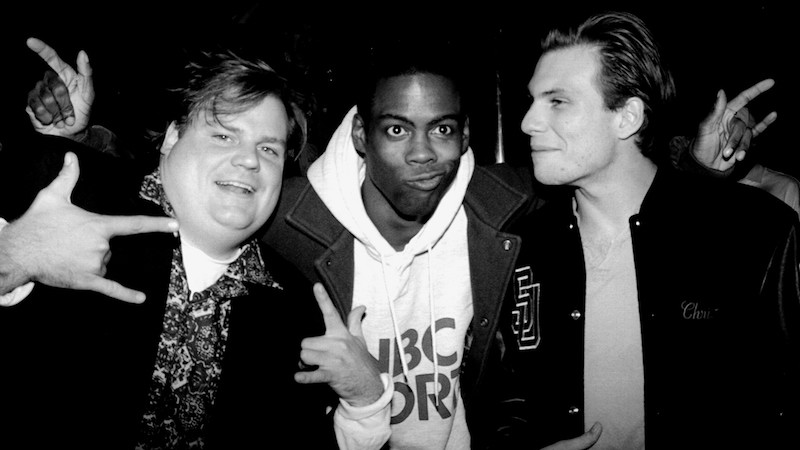 The popular documentary series Biography has come and gone a few times in its fifty-plus years on air, returning most recently in 2017, with appropriately supersized The Notorious Life of Biggie Smalls. On May 27, 2019, a new season began with Biography: Chris Farley – Anything for a Laugh, a look at the meteoric rise and tragically inevitable fall of a comedy legend who in just five seasons on Saturday Night Live and a handful of movie roles, made an indelible mark on comedy history.

Anything for a Laugh is almost too on the nose as titles go; that phrase so perfectly captures Farley’s approach to comedy. He was a volcano of energy willing to expose his body to gruelling punishment — or simply expose his body — in the name of getting a laugh. That was job one.

In comedy, as in electoral politics, one is well served by an absence of shame or embarrassment, as they will only hold you back from giving the people what they want. When he was on stage Farley was completely unencumbered by these typical human emotions. And so he would happily dance topless alongside Patrick Swayze or throw himself through a coffee table, so long as it would make the audience laugh.

The not-so-secret ingredient to Farley’s comedy, what made sketches like the Chippendale’s routine and all those pratfalls work, was his innate athleticism. If he’d been a bad dancer, the Chippendale’s bit would’ve been amusing, but because he was a good dance, the bit is a classic.

The show is filled with clips of Farley going all the way back to his days at Second City in Chicago, where the legendary improv guru Del Close anointed him “the next Belushi” almost on sight. And there are interviews, of course, with the likes of John Goodman, David Spade, Al Franken, Kevin Nealon, Tom Arnold, Bobby Moynihan and Joel Murray, among others. Time and again, his colleagues remark on both the fact that he was almost always the funniest guy in any room and that he had a huge heart.

Both Goodman and Franken recall Farley’s heart and humor with an added depth of gravity, perhaps because of their age, and in Goodman’s case because of his own struggles with addiction. Franken’s mood shifts at one point from delight at the memory of a friend to grim sorrow as he recalls one of Farley’s last Saturday Night Live characters, The Relapse Guy, about a man constantly trying and failing to get sober.  It was good for a laugh at the time and Farley begged Franken to keep writing it, but it’s tough to watch knowing what followed.

But Farley did, in fact, feel shame, particularly about his body, and according to his brothers it was a big part of what made him drink. Is it true? Who knows. When someone succumbs to addiction the way Farley did, people are often left with little choice but to engage in armchair psychology.

Watching Anything for a Laugh, it becomes clear that whatever haunted Farley may have run far deeper than simple body issues. As a couple of friends and family point out, Farley suffered from a touch of obsessive-compulsive disorder, and Anything for a Laugh manages to uncover footage of his tics in action, moments serious fans have likely seen without realizing what they were actually witnessing.

Making Farley’s life doubly tragic was that he was a devoted son, a practicing Catholic, and an eager volunteer to charitable causes. As Anything for a Laugh shows, he had the instincts and the desire to live a simple midwestern life, but for whatever reason, lacked the discipline to achieve it. He always needed more — be it laughs, food, drugs, booze… just more.

The day after Anything for a Laugh debuted, the A&E released two more episodes of the new season of Biography: Jeff Dunham – Talking Heads and Jeff Foxworthy – Stand Up Guy and coming in July are two more, Farrah Fawcett Forever and JFK Jr.–The Final Year.

Biography: Chris Farley – Anything for a Laugh, Jeff Dunham – Talking Heads and Jeff Foxworthy – Stand Up Guy are available on-demand on A&E.