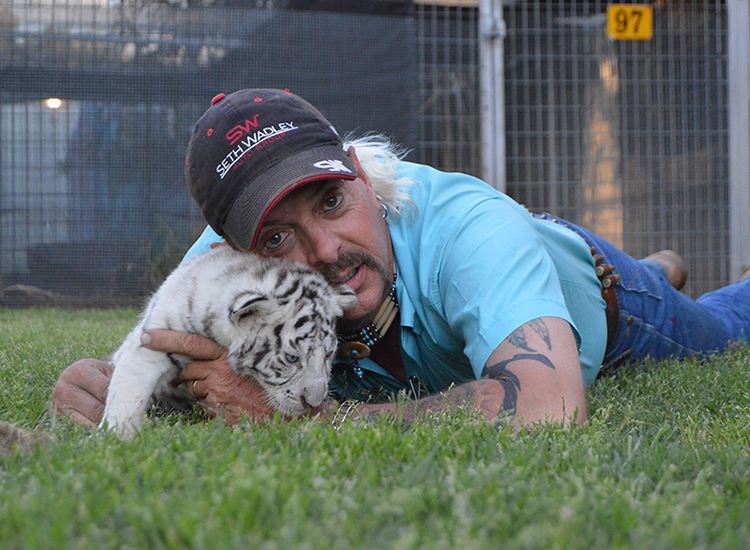 Joe Exotic is the mascot that 2020 deserves. The saga of the fame-hungry wild animal trader and zookeeper has been one of the most talked-about stories of the year, and the absurd escalation of his many conflicts mirrors our own culture pinballing from one crisis to the next. All currency printed this year should skip the dead president and instead feature a portrait of Joseph Allen Maldonado-Passage (né Schreibvogel).

For those who missed the eight-part Netflix special Tiger King: Murder, Mayhem and Madness, the (very) short version is that, after a personal beef with Carole Baskin — founder of the Big Cat Rescue sanctuary in Florida — Joe Exotic was sentenced to more than two decades in federal prison for his part in an alleged murder-for-hire plot against her, along with charges of animal abuse. However, to hear Joe Exotic tell it, Baskin was herself guilty of murdering her ex-husband Don Lewis, whose 1997 disappearance remains an open case (did we mention this story was crazy?)

The tale of the Tiger King has been like catnip during quarantine, and Investigation Discovery (ID) is premiering a pair of specials this week that will take a closer look at both cases. The three-part special Joe Exotic: Tigers, Lies and Cover-Up premiered last night, and it “takes a new look at the evidence surrounding Lewis’s mysterious disappearance, featuring exclusive jailhouse interviews from the biggest character in the world: Joe Exotic himself.” (Click here to watch). After tonight’s conclusion of that special, ID will also air Joe Exotic: Before He Was King, which will use “exclusive and never-before-seen interview footage of Joe Exotic,” to “reveal the dark secrets that led to the colossal crash which has landed him in prison for decades.”

To get you ready, we emailed questions to the lead investigators of both specials to get their thoughts on Joe Exotic, Carole Baskin and the entire Tiger King saga. Check out their answers below and stick around for additional details on ID’s fall programming.

Sling: How accurately did the original Tiger King documentary depict the death of Don Lewis?

Jim Rathmann: It didn’t depict the death of Don Lewis, but it did showcase the strange circumstances surrounding his disappearance. It did leave a lot of room for interruption and identified existing gaps that this show, Joe Exotic: Tigers, Lies and Cover-Up, will address.

Sling: What is one detail around his death that viewers will be surprised to learn?

JR: The timeline for which Don's disappearance was reported to the authorities. According to the statement by Trish Farr, Kenny Farr’s ex-wife, she and Kenny already knew Don was missing as of Sunday, 8/17/1997. Last person besides Carole to have seen Don in person before his disappearance was Anne McQueen on Friday, 8/15/1997 at Don’s office.

Sling: Who is more misunderstood: Carole Baskin or Joe Exotic?

JR: Joe Exotic. Joe most certainly lived a wild lifestyle, I believe most people would agree with that. Joe however, is very much black and white. Whether he likes you or not, you will know where you stand with Joe. He doesn’t hide his feelings and says it the exact way it is intended to be delivered.

Sling: What was it about Joe Exotic’s personality that made him so charismatic?

Derrick Levasseur: As a retired detective, I have interviewed hundreds of criminals. There is one trait that they most of them have in common: the power to manipulate. We see in Joe Exotic: Before He Was King, he plays on people’s empathy; his capacity to play the victim, even though he is the perpetrator of his own downfall. Joe has many names and he has reinvented himself so many times but, to what end? Power, fame and greed.

Sling: Why do you think the wild animal rescue community attracts people with such strange personal lives?

DL: I do think most of the people in this space started out with a genuine passion for animals. But, somewhere along the way that idea became corrupted. A lot of these sanctuaries are an opportunity for people go off the grid and re-invent themselves. What they didn’t realize is how they were slowly pulled into a dark world that is all too prevalent in our society today—the exotic animal black market. When people see how much money can be made, in a very short amount of time, it becomes a maze that many can’t get out of.

Sling: After speaking with Joe Exotic and those who know him best, what’s the biggest difference between his persona and his true personality?

DL: I personally have not spoken with Joe Exotic, but I have studied the case and, spoken with his associates. There is nothing extra ordinary about Joe Exotic. We should not be glorifying the actions of someone who, in the eyes of the law, was convicted of a crime. He is a classic example of an opportunist. He saw a way to make money and he was relentless in his pursuit. He kept pushing the envelope as far as he could until his misdeeds finally caught up with him.

What Else is On ID this Fall?

“Featuring first-person interviews and behind-the-scenes information of some of the internet's most viral crime clips, Crimes Gone Viral is a half-hour docuseries that explores the riveting stories behind shocking crimes caught on camera that gain viral fame on the internet. From business security cameras to home surveillance systems and cell phone cameras, someone is almost always watching. Gripping clips of kidnappings, break-ins, wild car chases, violent road rage incidents and other crimes rack up millions of views.” - ID

“Life in the big city means death lurks around every corner: Homicide City takes a deep dive into the stories of unforgettable murders from major American cities. From the mansions and manicured lawns of wealthy suburbs, to the darkest, most dangerous neighborhoods, each episode centers around a distinct part of the city. Told through the eyes of veteran homicide detectives, local beat reporters and the victim's families who have lost so much, these are the cases they will never forget.” - ID

Investigation Discovery is available to both Sling Orange and Blue customers. Follow the link below to get the best deal on both!