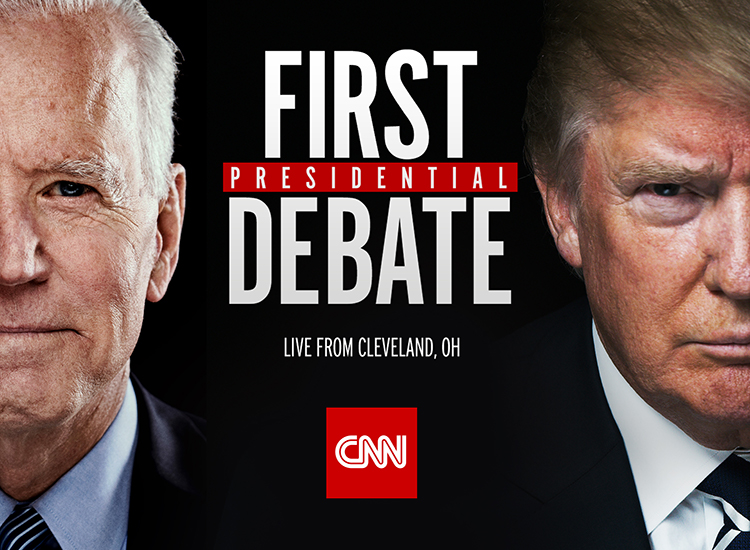 We’re now just five weeks from election day and tonight marks the first of three debates between Republican President Donald J. Trump and the Democratic nominee, Vice President Joe Biden (a fourth debate between Vice President Mike Pence and Senator Kamala Harris is scheduled for Wednesday, Oct. 7). With our partners at Fox News, CNN, MSNBC, and others, Sling has the 2020 Presidential election covered. Here’s everything you need to know about the upcoming debates.

Where is tonight’s debate and who is moderating?

The first debate was originally scheduled to take place at the University of Notre Dame but the school withdrew citing coronavirus concerns. Instead, the candidates will face off at Case Western Reserve University in Cleveland, Ohio, in front of a limited audience of 70 people, all of whom will be socially distanced and tested for COVID-19 prior to the event.

What are the topics and format?

According to the Commission on Presidential Debates, Wallace selected the following topics for the first debate:

The 90-minute debate will be broken up into “six 15-minute time segments” on each topic, “in order to encourage deep discussion of the leading issues facing the country,” according to the CPD. Both candidates will have two minutes for their opening remarks on each topic, along with the chance to respond to their opponent.

What else should I watch for?

Look for Biden to attack Trump on a recent New York Times report that claimed he paid just $750 in federal income taxes in 2016 and 2017 (Trump called the report “fake news”). President Trump will likely go after Biden’s son Hunter, who he claims was involved in a favorable energy deal with the Ukranian government as a result of his father’s political connections (Biden says this has been “discredited and debunked by authoritative sources”). Trump has also been “strongly demanding” that Biden take a “drug test” ahead of the debate (the Biden campaign responded, “If the president thinks his best case is made in urine he can have at it”).

When are the other debates?

The next Presidential debate will take place on Thursday, Oct. 15, at the Adrienne Arsht Center for the Performing Arts, in Miami, FL. It will be a town hall-style format moderated by Steve Scully, Senior Executive Producer and Political Editor, C-SPAN Networks. The third and final Presidential debate is scheduled for Thursday, Oct. 22, at Belmont University in Nashville, TN with Kristen Welker of NBC News moderating. The Vice Presidential debate will be moderated by Susan Page, Washington Bureau Chief, USA Today and takes place a week from tomorrow, Wed. Oct. 7 at The University of Utah in Salt Lake City.

How do I watch?

All debates begin at 9pm ET and will be carried live and commercial free on Fox News, CNN, and MSNBC for Sling subscribers, as well as ABC News Live for Sling Free users.

To get the most election coverage, subscribe to Sling Orange + Blue with News Extra by following the link below.