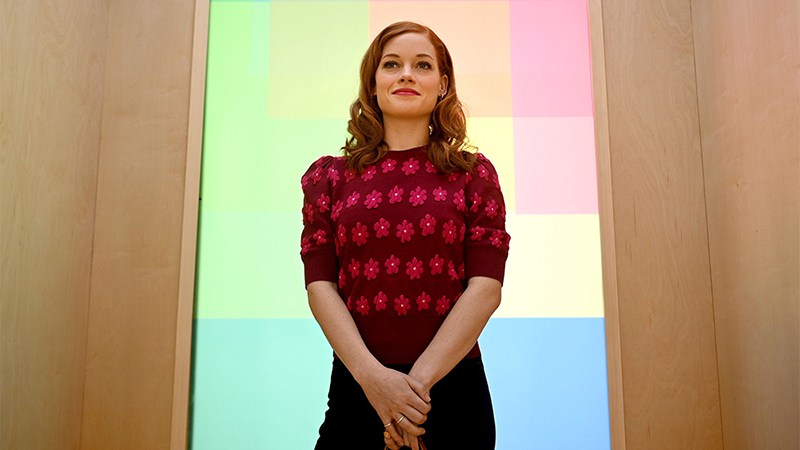 “Songs are all just an expression of our deepest wants and desires.” This nugget of wisdom is delivered in the first episode of NBC’s new dramedy, Zoey’s Extraordinary Playlist by the title character’s saucy DJ neighbor. It’s a moment that elicits a “duh” from anyone who has ever spent way too long deciding which YouTube music video link to send to a cute office mate, but for Zoey, a socially awkward computer programmer played by Jane Levy (Suburgatory, Netflix’s What/If), it’s an education.

The oddball premiere plops us into Zoey’s world, where she works for a gorgeously decorated San Francisco tech firm (complete with a communal cereal bar), is tongue-tied around both her shark of a boss (Lauren Graham) and almost too perfect co-worker with a troubling secret (John Clarence Stewart), and struggles with the quick physical decline of her father (Peter Gallagher), who’s suffering from a rare neurological disease.

When an earthquake hits while Zoey is in the middle of an MRI (her father’s diagnosis has made her particularly wary of even the slightest headache), the hospital’s music library – used to help patients relax during the procedure – somehow gets downloaded into her brain. This results in the ability to access the inner thoughts of friends, family and random strangers on the street vis-à-vis big musical numbers.

The premise is outlandish for sure. Just don’t get caught up in the science (or lack of) or start calculating how much it’s costing NBC to use mega hits like The Beatles’ “Help!” However, if you can accept Zoey’s predicament, the emotional beats, especially between Zoey and her parents (played by Mary Steenburgen and Gallagher) pack a wallop.

Like the characters in Zoey’s Extraordinary Playlist, we also noticed our feelings bursting out in song during key scenes of the pilot. Here are the five tracks we couldn’t keep in:

Both plucky and self-effacing, Levy gives Zoey charm that’s hard not to fall in love with – especially when the script requires rigorous suspension of disbelief.

3. Finding out Zoey’s office crush is engaged: Brooklyn Bridge – “Worst that Could Happen”

Zoey’s gift helps her connect with the new hottie in the office on an intense level, which has her walking on sunshine until she runs into him and his model fiancé.

This was the scene everyone saw coming from the moment the camera focused on Gallagher’s character sitting motionless and speechless while Steenburgen’s devoted wife and mother spoon-fed him soup. In a show centered around people singing their guts out to reveal hidden truths, the script’s soul is rooted in creator Austin Winsberg’s real-life experience with his dad’s Progressive Supranuclear Palsy diagnosis. Half hour sitcoms aren’t supposed to induce weeping, but Gallagher singing Cyndi Lauper’s “True Colors” to a bereft Levy sets a precedent.

5. Everyone needs a neighbor like Mo: Corinne Bailey Rae – “Put Your Records On”

Maybe it’s the music blaring across the hall every morning. Maybe it’s the robust record collection scattered around the apartment. Maybe it’s just a lack of confidantes. Whatever the reason, Zoey chooses to level with her neighbor Mo (Alex Newell) about her musical gift. Surprisingly, Mo takes the news in stride. Let’s hope the character gets to do more than be Zoey’s sounding board.

The premiere of Zoey’s Extraordinary Playlist is available on demand on NBC. New episodes return Sunday, Feb. 16 at 9pm ET.