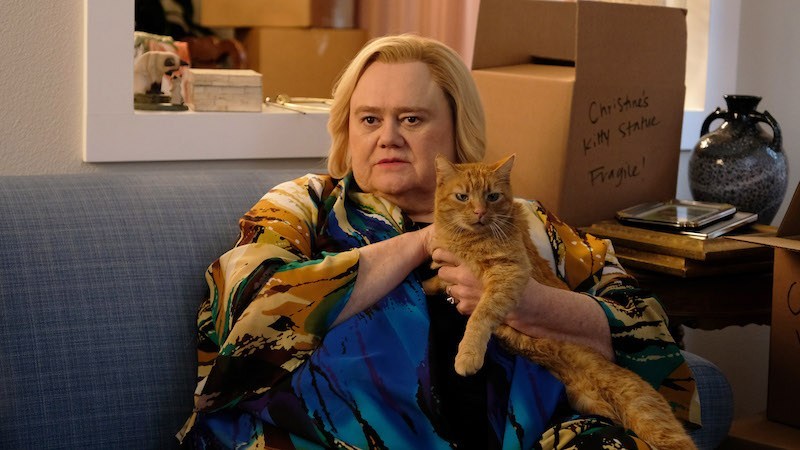 One of the great joys of this splintered media landscape we now live in is that a niche television show with a weird sense of humor can survive without attracting a huge audience. Case in point: Baskets, the subtly discomfiting sitcom starring Zach Galafinakis.

Galifinakis stars as Chip Baskets, a clown school dropout who moves home to Bakersfield to get a new lease of life. Over the course of the first three season Chip has a green card marriage go predictably awry, travels the coast with a band of ne’er-do-well hobo clowns, mentors a Juggalo, and watches his mother fall for the charms of a man she meets at the Ronald Reagan Library. That’s just the kind of show it is.

Baskets has found critical (if not commercial) success, with Galifianakis earning a Best Actor in a Comedy Emmy nomination for the show’s debut season. Galifianakis also plays Chip’s twin brother, Dale, But the real standout has been the performance of Louie Anderson as Chip’s mother Christine, for which he’s received three Emmy nominations as Best Supporting Actor in a Comedy, winning the award in the show’s first year.

Anderson’s turn as Chip’s nasally, overbearing, sixty-something mother is a wonder to behold. Draped in tent-like dresses of garish patterns, his blonde hair parted to the side, and occasionally giving a fay flip of the wrist, Anderson could not make much less effort to transform himself into a woman, but it totally works. It’s kinda magical.

Season 4 of Baskets finds Chip at yet another crossroads as his mother sells his childhood home to move into a new one with her new husband, Ken, leading to Chip to realize that at 49 years of age, it just may be time to get his own place. What’s the rush?

His first stop is at the home of his former colleague, a Juggalo who’s named his baby boy Chip in gratitude for him having introduced him to his wife. Observing them as a family unit, one wonders if their gratitude might not be misplaced. Chip quickly finds himself pressed into service helping out with the baby, a task for which — SPOILER ALERT! — he is grossly underqualified.

Chip eventually convinces his mother and Ken to lend him the money to buy a condo, but not before his only friend, Martha, introduces him to her life coach, who gives him the courage to ask for what he wants from life. Christine, meanwhile, endures traumas of her own, like the violent integration of her cat, Ronald Reagan, with Ken’s cat, Susan. Their initial confrontation is excruciating, as Christine and Ken use their respective cats like puppets and they have a chat to get to know each other.

Things get worse for Christine when, while in the process of unpacking at her new home, she realizes she’s misplaced her beloved refrigerator magnets. And the situation in the kitchen gets worse when a friend insists she doesn’t yet feel at home in her new house because she doesn’t have a “kitchen slogan” — her friend’s is that classic chestnut “Bless This Mess,” which she has splashed across a wall.

Baskets is seldom laugh-out-loud funny, but that’s because it’s seldom trying to be. It’s a much more nuanced show, a slow burn that constantly keeps you on edge waiting for the other shoe to drop, nervously chuckling out of the corner of your mouth.

Season 4 of Baskets premieres Thursday, June 13, at 10pm on FX; new episodes will be available Thursdays on demand.