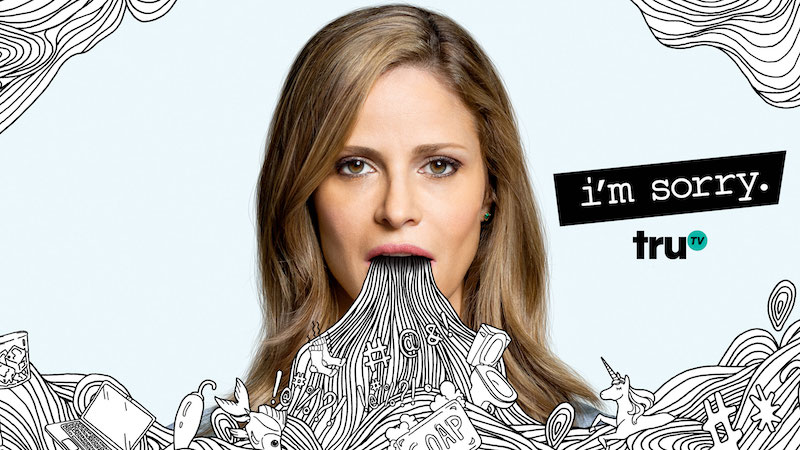 The truTV network has historically been known for its reruns of its male-centric comedy shows: Impractical Jokers, The Carbonaro Effect, and Adam Explains Everything to name a few. The Andrea Savage-helmed I’m Sorry broke this mold when it premiered on the network in July, 2017. After its critically acclaimed 10-episode first season, I’m Sorry returns Wednesday for its much awaited second season.

Creator Andrea Savage (Veep, Episodes, Step Brothers) stars as Andrea Warren, a Los Angeles comedian and writer who also is also a mom. In the pilot episode, her character says, “Moms aren’t supposed to be funny,” and throughout the first season, she proves that comedy and motherhood are not an either-or.

Andrea (both the actress and the character) exudes a Julia Roberts-like charisma as she navigates multiple awkward situations with her R-rated comedy. Her humor just crosses the line for her suburban mom lifestyle. Tom Everett Scott (Southland) winningly plays her loving husband Mike. He keeps Andrea’s character grounded. On the other end of the spectrum, Jason Mantzoukas (Brooklyn Nine-Nine, The Good Place) portrays Kyle as Andrea’s writing partner whose vulgarity makes Andrea seem like a Disney princess by comparison.

Some of the highlights from the first season were the uncomfortable yet relatable moments that many parents experience. Whether it be discovering details about your child’s teacher’s personal life, experiencing an awkward moment with another parent during a playdate, or dealing with her own parents’ bad behavior now that they’re retired and dating again. Savage takes each of these situations and exaggerates them just enough that they’re uproariously embarrassing and enjoyable while still upholding believability.

The show also has no shortage of star power as a slew of famous guest stars pepper the first season. Judy Greer, Judith Light, and June Squibb appear in the pilot episode alone. Catch the second season premiere of I’m Sorry on Sling on Wednesday, January 9 on truTV available on the Comedy Extra.