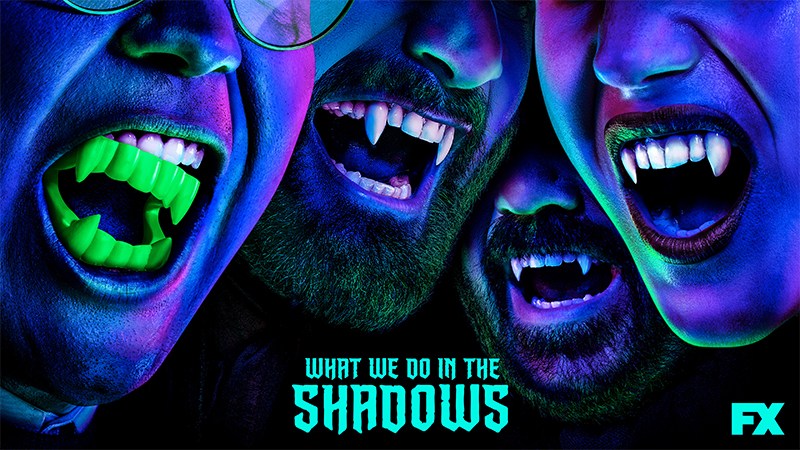 The latest offering from FX, a self-aware mockumentary following the lives of four ancient vampires living in Staten Island, may be one of the best things I have seen on television. As a lifelong fan of Jemaine Clement’s work and his original 2014 film by the same name, What We Do in the Shadows is everything I had hoped it would be – but more on that later. It will be unavoidable to make comparisons to the original film often, but I am happy to say that this franchise has given itself a great shot at carving out a new brand identity and reputation for itself.

The mockumentary follows the lives of four cohabitating vampires – most of whom moved to the New World (also commonly known as Staten Island) from ancient Europe. The quartet’s self-proclaimed leader “Nandor the Relentless” (Kayvan Novak) is a conqueror from the Ottoman Empire and a lover of glitter glue sticks. Next, we meet a British vampire named “Laszlo” (Matt Berry) who is the resident popinjay whose hobbies include topiary and plotting against Nandor. Laszlo also has the most vampiresque voice which make his sassy one-liners even more eargasmic and hilarious. Laszlo’s partner-in-crime – “Nadja” (Natasia Demetriou) – is the group’s temptress and vintage-camera-toting stalker. Her hobbies include finding the reincarnation of her bygone lover, sharing tales of her provocative trysts, and avoiding her fourth roommate – Colin Robinson (Mark Proksch) – at all costs.

Colin Robinson, the office-dwelling human embodiment of the color beige, is a new type of vampire in What We Do in the Shadows‘ canon. In lieu of attacking victims and drinking from their throats to satiate his bloodthirst, Colin drains the energy from his victims through boredom and irritation. Whether he’s frequenting a city council meeting to make a proposal for city planning or boring his roommates, Colin’s appetite can only be satisfied by the types of activities he notes are “a smörgåsbord of banality and despair.” Mark Proksch’s “Colin” is my favorite character in the series and an ingenious addition to the franchise.

As far as non-vampires go, each vampire has a familiar or human companion that helps them navigate the modern world. Nandor’s familiar Guillermo (Harvey Guillen) is the daytime protector-slash-errand boy that proves to be more than easy comedic relief.

The group has long been satisfied by lounging around in their mansion and occasionally feasting on LARP-ers that Guillermo convinces to visit. However, when their dark lord “Baron Afanas” (Doug Jones) visits unexpectedly from the Old World, their mission to take over the New World comes screaming back into view. This 10-episode first season guarantees to please both the long-time Clement and Waititi fans as well as those new to the franchise. You’re not going to want to miss out on this hilarious new addition to the FX family. I’d bet my jugular on it.

New episodes of What We Do in the Shadows at 10pm ET Wednesdays on FX, and Thursdays On Demand.