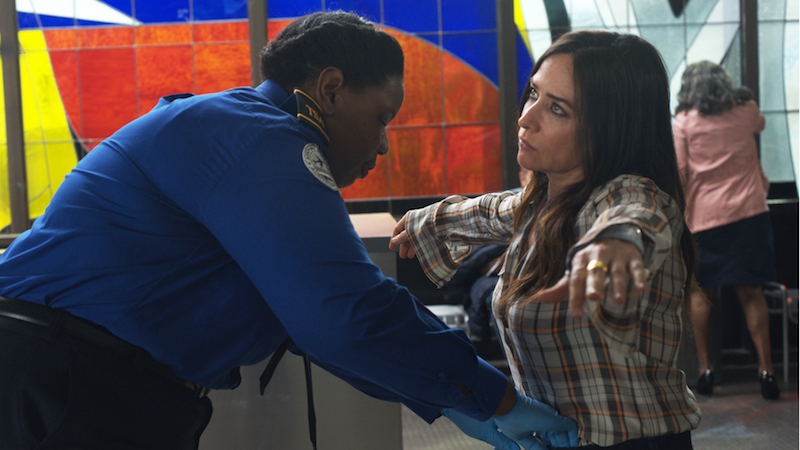 Pamela Adlon is doing something rather extraordinary with her FX half-hour, Better Things, which returns for its third season Thursday at 10 p.m. ET — and I don’t mean the eye-popping fact that in addition to appearing in every scene, she also directs all 12 episodes, writes or co-writes almost all of them, and is the executive producer and showrunner.

What’s even more impressive about this third season is that Adlon has almost totally jettisoned any conventional notion of plot or dramatic conflict, instead creating episodes that play like a day in the life of midlevel working actress and single parent Sam Fox (Adlon), her challenging daughters Max (Mikey Madison), Frankie (Hannah Alligood) and Duke (Olivia Edward), and her mentally declining mother Phil (Celia Imrie) — no shortage of problems or individualized conflicts, but precious little resolution to any of it, like real life.

It’s an old saw among comedians that the more specific, the more universal, and this is a lesson Adlon has taken to heart. Each of the five season 3 episodes we saw were jam-packed with extremely specific details, often unrelated to anything else in that episode or even to the thrust of the scene they’re in, that rang true, well observed, and funny. For example: Stopping the car to take a photo of a huge turd in the street and texting it to a friend. A doctor who makes excessive use of the F-word during a routine exam. The tension when a divorced couple accidentally both come, with dates, to a dinner. Getting busted reading your seatmate’s screen on an airplane. The little charge of self-esteem you get when you’re clearly way over 21 but get carded anyway. And on and on and on.

Adlon has always been an especially warm presence on screen, even when she’s being acerbic, and the young actors playing her daughters have always been good, but this is their best season yet as an ensemble. As oldest daughter Max, Mikey Madison is both brazenly grown up and timidly naive, struggling with her first year at college; Olivia Edward’s Duke is locked in a sibling rivalry with Frankie that’s only intensified with Max at school, and longs for a closer relationship with her wayward dad (in one of the series’ best moments, realizing that her ex has broken Duke’s heart yet again, Sam resists piling on and poisoning Duke against him by offering, “I’ll hate him for you so you don’t have to”); and Hannah Alligood, always the standout among the kids, is more exasperating than ever, radiating fierce intelligence and precociousness even as she’s childishly obsessing over fairness in her battles with Duke.

The supporting cast is also terrific. Diedrich Bader as Sam’s gay BFF Rich; Rebecca Metz as her agent Tressa; Kevin Pollak as her brother (in a clever inversion of the fact that Sam, her mom, and her kids all have men’s names) Marion; Alysia Reiner and Greg Cromer as her once-married, now-feuding friends; all of them create a very believable extended family of friends orbiting and supporting (always supporting) this eccentric but essentially decent woman and her family through thick and thin.

The elephant in the room with this show is that it grew out of Adlon’s fruitful relationship with Louis C.K.. She played his wife on his HBO sitcom, and then wrote, produced, and played his on-again off-again flame on FX’s Louie, which led to the pair co-creating Better Things, with C.K. writing and/or directing a number of episodes in the first two seasons. C.K. had some, ah, personal issues after season 2, and is no longer associated with the show (though he retains his “created by” credit).

The good news is, if you didn’t already know that C.K. was involved with Better Things, you’d have no idea that anything has changed in the new season. It’s exactly the same warm, funny, relatable show it was before, and if anything it’s even better than in past seasons.

This is the kind of show that I find myself simultaneously smiling and half choked up as I watch, as it is so deeply empathetic about the bruising experience of aging and raising children — plus it has a number of sharp insights into the life of a working actor that may not be as universally relatable but are just as funny. Better Things is back and there are few, if any, better things on television.

New episodes of Better Things air at 10 p.m. ET Thursdays on FX starting February 28, and will be available next day on demand.