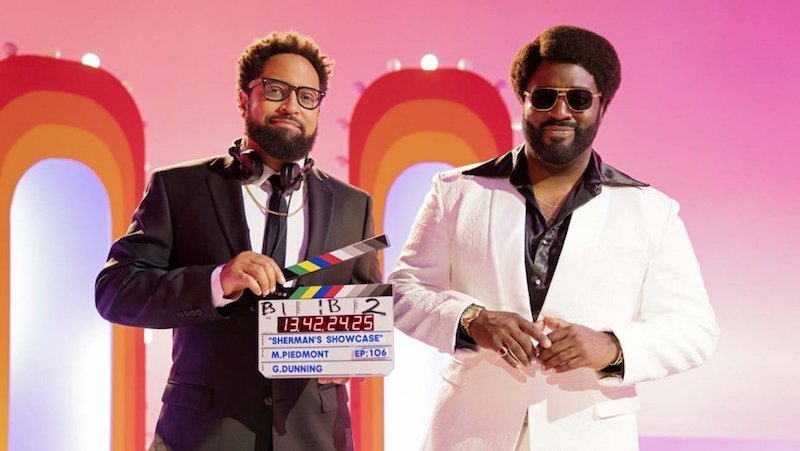 Longtime writing partners Daillo Riddle and Bashir Salahuddin met as undergrads at Harvard and since then have earned Emmy nominations for their work on Late Night with Jimmy Fallon and the short-lived NBC variety series Maya & Marty. Along with Salahuddin’s brother, Sultan, they’ve co-created the recently debuted South Side on Comedy Central. The show is already a huge hit, particularly with black audiences, with the premiere drawing more than 2 million viewers, and it’s easy to see why.

The show stars Sultan as Simon James, a resident of Chicago’s famed South Side. We meet him on the day of his graduation from Kennedy King Community College (“right down the street from Walgreens”). Emboldened by his new degree in business administration, Simon quits his job as a repo man at Rent-to-Own to seek his fortune. When that fails, he finds the only way he can get his job back is to reclaim an Xbox from RTO’s most notorious customer, a man who once forced one of their colleagues into retirement with an arrow to the thigh.

Sultan is a natural, with the beleaguered charm of a wiseass who’s trying to do the best he can, but who knows it ain’t quite enough. The show cracks wise on all manner of things that bedevil the local community: vengeful babymamas, drive-by-shootings, dirty cops, background checks, on and on. What gives the show an extra touch of verite is that it’s largely produced by and starring local talent. With the exceptions of Riddle and executive producer Michael Blieden, every major contributor has Chicago roots and the show is shot on location — an effort that pays dividends.

Bashir Salahuddin has a small role as Officer Goodnight, a straight-laced cop who gets roasted regularly by his partner, Officer Turner, played by his real-life wife, Chandra Russell. The two are introduced to the RTO crew as their new protection, then Turner tries to put everyone at ease by assuring them “We are not here to beat anyone today.” (The “today” really takes that joke up a notch.) As they leave, the boss tells his employees they’ll all have to chip in for the cops because “You all know Chicago cops are not cheap.”

Russell is great in an understated performance as a cop with no reservations about abusing her power. When she’s not mocking Goodnight for sounding white, she’s using their prowler’s PA to detain attractive men, but not before taking a moment to look in the mirror and declare “Ho is life… I gotta get mines and I gotta go get this dick.” She’s also not above taking protection money and then reneging when she gets offered more money to look away. She manages to disappoint or disgust Goodnight at every turn.

If South Side doesn’t do it for you, Riddle and Bashir Salahuddin have another show premiering 7 short days after South Side: If a mad scientist were to throw Laugh-In, In Living Color and Soul Train into a blender, then extrude it into a casing, the resulting sausage would taste quite a bit like Sherman’s Showcase, the new comedy sketch show arriving Wednesday on IFC.

Sherman’s Showcase is look back at the history of a fictional variety show that looks quite a bit like Soul Train, with its coterie of dancers shaking it to the latest soul, funk and R&B hits and host Sherman McDaniel (Bashir Salahuddin) presiding over things, including game show segments and dance-a-thons. Throughout, there are interviews with Sherman and the dancers regaling us with both fond remembrances and old beefs.

At one point, Sherman is introducing the dancers as a list of biographical information about each of them appears on screen; when he gets to the Funk-a-Tron 2000, the dancing robot he invented, the final bullet point is “Voted for Reagan in 1976.” And while that joke is quite clever, they’re also happy to go super lowbrow, as when Sherman goes undercover by simply donning a gigantic silver handlebar mustache and dropping his voice a couple of octaves to infiltrate the dancefloor and sniff out efforts among the dancers to unionize.

Sherman’s Showcase snaps off jokes at a frenetic pace — don’t like one? There will be another before you know it. The show is stuffed with sight gags, one-offs, and double entendres that just keep coming. Like magicians who distract you with a narrative to keep from you noticing how the magic really happens, the throwaway bits are what make the rest of the show funny. With its rat-a-tat delivery and its utterly gonzo anything-goes ethos, Sherman’s Showcase just keeps chipping away, daring you not to laugh.