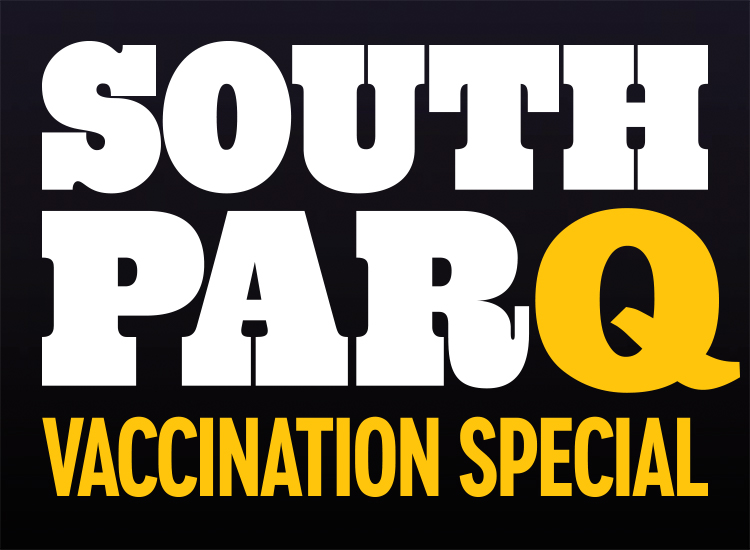 Has any show done a better job balancing absurdity and insightfulness than South Park? Comedy Central’s long-running satire returns with the South ParQ: Vaccination Special on Wednesday, March 10 at 8pm. The all new hour-long special promises to take jabs at the jabs we’re all about to take (the “Q” in the show’s title also suggests a certain group of conspiracy theorists will be targeted as well).

However, for a show that features an anthropomorphic turd as a recurring character, South Park has always had a surprisingly salient take on current events. Since premiering in 1997, the show has tackled almost every major news event in something close to real-time. What’s shocking isn’t that the show's creators Trey Parker and Matt Stone would take subversive swipes at our increasingly surreal society; it’s that, more often than not, the show finds a way to address these issues in a way that feels perceptive, and on occasion, even profound.

To celebrate the return of everyone’s favorite foul-mouthed fourth-graders, here’s a look back at five of the show’s best political episodes. To watch the South ParQ: Vaccination Special, sign up for Sling Orange using the link at the bottom of this page.

South Park’s season 17 premiere is an excellent example of the show’s trademark see-saw between the topical and surreal. When Eric Cartman goes undercover at the NSA to expose the agency's secret monitoring of our emails and phone calls (which also inspires Butters to worship the government as if it were God), viewers immediately recognize the plot as a riff on Edward Snowden. But what Cartman discovers—that Santa Claus, the ultimate arbiter of naughty and nice, is at the center of the operation—is the type of joke that only South Park can pull off.

“Let Go, Let Gov” airs Mon. March 15 at 2:15 am ET on Comedy Central. Use your 50 hours of Free DVR to record South Park and never miss an episode!

South Park is often at its best when it goes meta, and the real world occasionally reacts to the show, creating something like a meta tornado where art imitates reality imitating art. Case in point: “Band in China,” an episode satirizing Hollywood’s attempts to appease Chinese censors, which was subsequently banned by Chinese censors, fulfilling the destiny set forth by the episode's title (Parker and Stone later "apoligized"). The story also sets the stage for another classic episode we’ll be getting to later...

Click here to watch now with Comedy Central on demand

The cause of collapse of the housing market in 2008 was highly confusing for many Americans. As with other nuanced topics, South Park did as good of a job as any show at breaking it down for bewildered viewers. Of course, South Park’s approach was to use our confusion itself as an allegory for a vengeful Old Testament God who is angry at the townsfolk for their consumerist indulgences. At least that’s how the prophet Randy sells it to his neighbors, when he’s not using a certain Jimmy Buffet-branded blender to make some tasty margaritas.

In terms of things we’re not supposed to joke about, religion is a close cousin to politics. Yet from the very first short that got the show on air—a violent battle between Santa and Jesus for the spirit of Christmas—South Park has never been afraid to tackle this taboo topic. Although they’ve had memorable episodes about Judaism and Islam, their take on Mormonism is one of the best in the show’s long history. In some ways a dry run for their Tony-winning musical Book of Mormon, the episode portrays a modern Morman family as unfailingly polite, while flashing back to give us the bizarre musical origin story of the religion’s founder, Joseph Smith. While the show is outrageous when it comes to religion, Parker and Stone have always been respectful about the impact of faith on an individual level (well, maybe not for Scientologists).

With the specter of COVID-19 dominating every aspect of life in 2020, we all knew South Park would tackle the pandemic. But boy did they ever go there. In an hour-long special, the show riffs on hot-button issues like a toddler plays with its food: Police brutality, systemic racism, and remote learning are all skewered. The episode also cleverly retcons the events of “Band in China” to reveal that the debauched Chinese misadventures of two individuals created COVID-19: Randy Marsh and Mickey Mouse. It is so, so foul.

But in typical South Park fashion, there’s a whole lot of heart behind the jokes about animal sex. At the end of the episode, Stan breaks down in tears as he opens up about the stress and fear caused by the lockdown, articulating emotions that millions of us have let bottle up over the last year. A big part of the show’s enduring success comes from its unique ability to not only satirize our society but to uncover essential truths about our own roles within it. And then follow that up with a fart joke.

Use the link below to get Comedy Central on Sling!