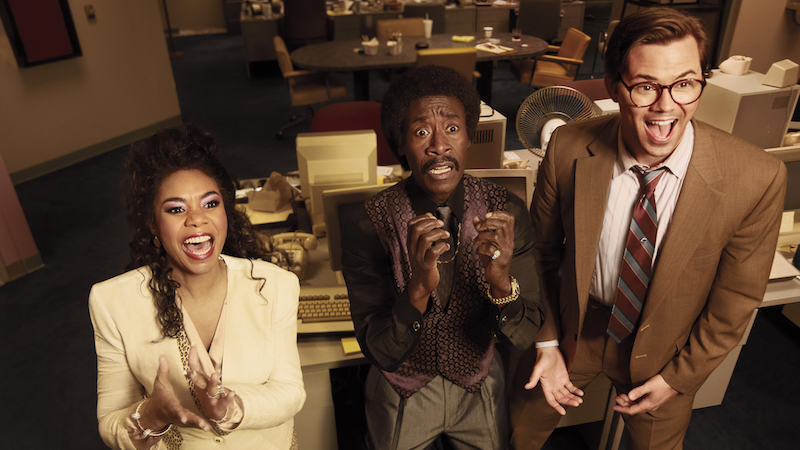 When a show opens with with Rolexes, gemstones, a Limbo (yes that’s the correct spelling of a stretch Lamborghini) and skyscraper jumps, you’d expect that you are starting from the pinnacle of 1980s excess — and you’d soon be proven wrong, as Showtime’s Black Monday is just getting started in its mission to detail the biggest one-day crash of the stock market, October 18, 1987.

But before we get there, we flash back to a year before the crash, into the conniving and narcotic-fueled world of Maurice “Mo” Monroe, portrayed by the incomparable Don Cheadle. Start thinking about about your most absurd stereotype of the 1980s, including gallons of hairspray and neon tracksuits.

Add Crystal Pepsi, the widest lapels on the most expensive Bijan suit you can imagine and a house robot that delivers cocaine on command. Then you will have a more accurate depiction of the tone of this show. It’s easy to compare this to Martin Scorsese’s The Wolf of Wall Street cut up in 30-minute episodes. The persistent and extreme misogyny and drug use are all present but this 80s Wall Street tale seems more concerned about telling a joke than actually telling a story that is strictly true.

And that is where Black Monday wins. The lead cast envelops the insanity seemingly effortlessly to the point that it’s so much of a train wreck that you can’t look away. Regina Hall is the leading example of this and the performance that stands out most. Watching her exercise to a Jane-Fonda-esque workout tape while smoking a cigarette perfectly encapsulates her role in this group: trying to keep it all together while indulging in the vices that will inevitably bring them all down.

She cuts through the stereotypical machismo of the tired boy’s club by pushing back and topping her colleague’s bewildering approach to investments. But as much as she can bring the madness, she is the check and the balance to Don Cheadle’s Mo. She’s the reason you think this team can get away with its insanely risky schemes, even with hindsight telling you they will inevitably crash. You’re rooting for them. Inexplicably, because there is absolutely no reason to do so. None of this makes any sense. Of course there is no such thing as a Limbo. That’s the point.

This is the result of a series executive produced by Evan Goldberg and Seth Rogen. When you’re coming from a place singing in heaven with the Backstreet Boys after the apocalypse, creating a movie about assassinating a North Korean dictator and telling a intricate story about a sausage, in that context, Black Monday becomes the logical next step.

We have 365 days until Black Monday. Buckle up in the Limbo. It’s going to be a wild ride.