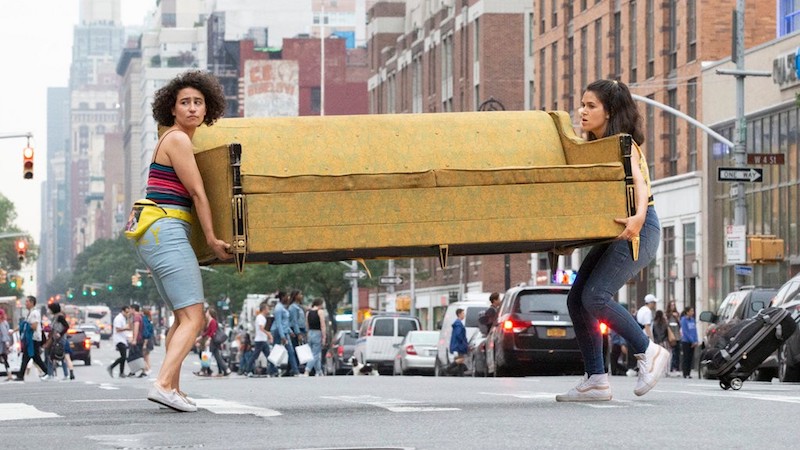 Ilana Glazer and Abbi Jacobson return for the fifth and final season of Broad City this week, and as usual, we know nothing about what to expect, other than a lot of boundary-pushing laughs and a lot of New York City.

Correction: we know next to nothing. Abbi and Ilana have been making the press rounds in advance of their ten-week swan song, and they have dropped a hint or two as to what we can look forward to:

An episode-length Instagram story. “I’m gonna ‘gram it,” indeed — the season premiere, airing 10pm ET Thursday on Comedy Central — is reportedly set up to look like one long social media overshare.  “In an innovative narrative approach,” The Hollywood Reporter writes, “the episode is presented through a story on Ilana’s phone as the duo set out — armed with maps, fluids and heavily discounted, high-end footwear.”


Less Politics. Fans will recall that season 4 cleverly treated “Trump” like a curse word, bleeping it anytime one of the characters said it, and the girls depression over his election hung over the whole season. In their joint interview (meaning they did the interview together, not that they had a joint during the interview, although I would not rule out that both might be true) with The New York Times, in explaining why they’re ending the show now, Glazer said:

“…the fourth season was bizarrely political, the process of it, and I think that’s why the product turned out that way. Season 4 really took it out of me, from beginning to end, and stretched on for so long. We couldn’t do another one after 5. Couldn’t do it.”

While far from definitive, this gives the impression that season 4’s more political tone was a phase that’s over and done.

Abbi makes a friend. This show is about Abbi and Ilana — the other characters are their roommates, family, or love interests. They have no other friends. But unless they lied to The Failing New York Times, that’s going to change in season 5:

NYT: There’s a story line this season about Abbi making a new friend, much to Ilana’s chagrin.

GLAZER: How funny is that? Ilana is blindsided. That’s Lucia Aniello, who’s a writer and our main director for Broad City. It was fun to explore that idea of, hello? They have no other friends.

Ilana starts a business. This one comes straight from the official logline for the season on the Comedy Central website: “In the final season, Ilana starts her own business and learns about her ancestors, while Abbi turns 30 and…tries to pull off a hat.” What type of business Ilana would start, we can only guess at… perhaps she invents a combination vibrator/vaporizer? A Vibraporizer? If that’s not what it is, no one steal that idea, I will probably use it.

Abbi dates a woman. The Failing New York Times asked Jacobson about a plot pulled from her memoir, I Might Regret This:

We also see Abbi have her first experience dating a woman.

JACOBSON That’s in my book [in which Jacobson talks about dating a woman], and I wanted to put that in the show. It totally feels —

JACOBSON Abbi’s not the fumbling idiot we’re used to seeing, trying to ask someone out. It feels more real.

GLAZER She knows how to ask somebody out, and she wants to. It’s fun to see that.

JACOBSON That’s such an Ilana influence — real life, and the show.

GLAZER For the whole show, we’ve been figuring out how much different we are than our characters. Now that it’s over, I feel so free and proud to be like, that is us. It’s not completely, exactly us, but it’s us.

Actual human emotions. “We needed the last moment shooting together to be the last moment for them, too,” Jacobson told Jimmy Kimmel during the pair’s late-night appearance last week. of filming chronologically so the final scene for the characters was the last one they shot. Glazer added, “So the characters are weeping, but we are truly weeping, as is the crew. We were hysterically crying for four hours on a sidewalk in Queens.”

You’ll love it.  Ilana told Rolling Stone, “We’re so excited about the 10 new episodes. You will be digging what we are going to lay down.”

The final season of Broad City premieres at 10pm ET Wednesday on Comedy Central; all of season 4, and a few random older episodes, are available on demand.