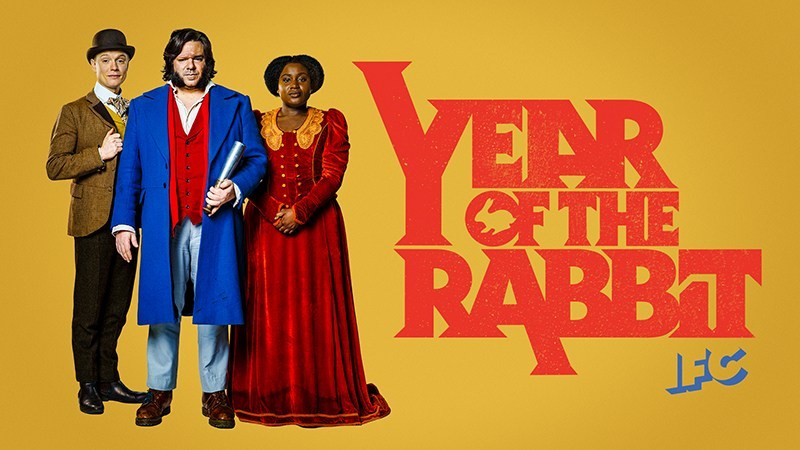 Hot on the heels of Toast of London comes another British sitcom starring Matt Berry, Year of the Rabbit. This new IFC import from across the Pond stars Berry as Detective Inspector Eli Rabbit, a foul-mouthed and hyper-violent member of the Metropolitan Police Force in Victorian Era London. He’s the kind of copper who’ll complain bitterly about the quality of a striptease show before announcing his intention to arrest everyone in the club for being party to such displays of lewdness.

Year of the Rabbit was created by Kevin Cecil and Andy Riley, who have been friends since school and worked together on Veep, just to give you a sense of how fast, cruel and funny the dialogue is. In addition to a healthy sprinkling of run-of-the-mill profanities, Rabbit’s patter is also heavy on British slang — Bacon dolly, jam tart — that may leave scratching your head, but are funny nonetheless.

On its surface, the show is a mishmash of classic cop show cliches, chief among them the hard-drinking grizzled veteran, Rabbit, saddled with the hopelessly naive rookie partner, Detective Sergeant Wilbur Strauss (Freddie Fox). Also riding along with Rabbit is Mabel Wisbech (Susan Wokoma), the daughter of Chief Inspector Hugh Wisbech (Alun Armstrong), a woman who desperately wants to be a police officer, a dream her father insists simply isn’t possible, much to her consternation:

Mabel: You said you wanted the best for me!
C.I. Wisbech: I was mainly talking about hats.

In the second episode, the trio find themselves on the trail of “Brick Man,” an old legend about a man who blends in perfectly against any brick wall and walks the streets at night to kill those who don’t believe in him. One local in his infinite Victorian Era wisdom decides the best course of action is to “break every brick wall in London Town.”

In addition to the bad actors roaming the streets, Rabbit also has an arch-nemesis on the police force, Detective Inspector Tanner, a self-aggrandizing fop with a gift for arresting the wrong person and unintentionally thrusting himself in harm’s way. His manner in cracking a case is that of a constipated clairvoyant.

Year of the Rabbit’s vision of late 19th Century England is as absurd as you would expect from any show starring Berry. Kids in the street are hawking bottles of London fog, jars of “s*** and mud for a penny,” lungs and other assorted wares. Among the other denizens of this iteration of London is John Merrick, best known as the Elephant Man, while another character is an homage to the Phantom of the Opera.

Year of the Rabbit delivers an entertaining blend of cruelty, stupidity and humor thanks to some whip-cracking dialogue as well great performances from Berry and Wokoma, who delivers her lives with a brilliant deadpan fury.