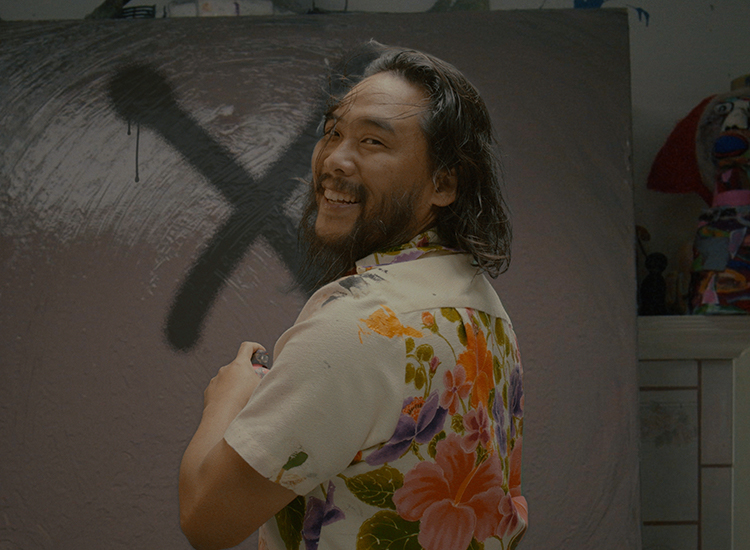 Conan O’Brien is finishing up his 28-year late night run this week with the finale of his TBS talk show on Thursday. As sad as we are to see one of the late night pioneers hang it up (and as old as his retirement makes us feel), there’s a new generation of hosts on the come up, all of whom are poised to bring their own style and innovations to the talk show format. Check out five of our favorite new talk shows below; use the link at the bottom of this page to sign up for Sling Blue and be sure to add SHOWTIME to your cart at checkout.

David Choe has a personal story as distinct as the art he produces: A former Vice contributor, Choe pioneered what he refers to as a “dirty style” of art, an impressionistic technique that often deals with primal themes around lust, shame, and ecstasy. He’s spent time in jail, and earned millions from the Facebook stock he was given after painting a series of murals for their office.

His new four-episode FX talk show The Choe Show is as raw and provocative as his art. The first episode finds him interviewing his former podcast co-host and adult film actress Asa Akira, and at one point, he assumes the role of her unborn son asking about her career. In other words, Choe will go there with his guests and himself; he speaks candidly about his traumas so that the interviewees feel comfortable sharing theirs. The editing incorporates the mixed media of Choe’s art, giving the show a visual flair that’s basically unprecedented in the talk show format. Probing and artistic, The Choe Show feels a lot like one of Choe’s paintings: Uncomfortable, daring, intimate, and above all, unflinchingly honest.

The Choe Show will air all four episodes this Friday, June 25, beginning at 10pm ET on FX. All episodes will be available on demand the following day.

Like Choe, Ziwe is absolutely fearless when it comes to challenging her guests. But if Choe is willing to expose his own failings and vulnerabilities, Ziwe lobs grenades of provocation while hidden behind a wall of inscrutable stoicism (in her now-viral interview with Fran Lebowitz, she asks questions like, “What bothers you more, slow walkers or racism?” and “What percentage of white women do you hate, and there is a right answer”). Ziwe’s interview style lets her guests sit in their awkwardness, forcing them—and the audience—to determine the extent to which she’s kidding (or not), but her show incorporates sketches and meta moments (fake commercials, intentionally misleading teases, etc.) so it feels fluid and stylish instead of simply cringey.

All episodes of Ziwe are available on SHOWTIME

Doing the Most With Phoebe Robinson

The premise behind Phoebe Robinson’s new Comedy Central series is to take the talk show out of the studio and into the world. The first season of the Doing the Most With Phoebe Robinson finds her interviewing Whitney Cummings while horseback riding, talking to Kevin Bacon as they navigate a high ropes course, and chatting with supermodel Ashley Graham while rollerblading. As one half of the popular 2 Dope Queens podcast, Robinson has a gift for gab, making her guests feel at ease even as they get physically uncomfortable.

The Daily Show veteran Samantha Bee has been a powerful voice in political comedy since her show premiered five years ago. If The Daily Show takes a birds-eye view to highlight the topography of politics, Full Frontal with Samantha Bee is there on the ground providing a walking tour through the wasteland. Nowhere was this more evident than in the recent special “Full Frontal Wants To Take Your Guns,” a harrowing look at America’s gun crisis that was funny in the same way a fart at a funeral might be. Righteous indignation is the show’s default mode, so if you’re the type of person who needs to laugh to keep from crying, Full Frontal will keep the tears at bay, even if it raises your blood to a boil.

Near the end of an episode taped last year, The Bodega Boys, Desus & Mero, earned the highest possible praise talk show hosts could get: A full-throated endorsement from David Letterman himself (“This is the future. This is the way it ought to be,” he told them at the end of their interview). Although all of the hosts on this list are vastly different, the common thread is that they’re all unapologetically themselves, perhaps none more than Desus Nice and The Kid Mero. Their lack of pretension speaks to their roots as working-class New Yorkers. Even when they’re interviewing cultural titans like President Obama, AOC, and Chadwick Boseman, their “hilarious friend from the block” quality shines through, imbuing their discussions with the same sort of nervous anticipation you feel just before a watching dangerous motorcycle stunt. The biggest difference? Desus & Mero have never crashed.

Get Sling Blue for the best price by using the link below!