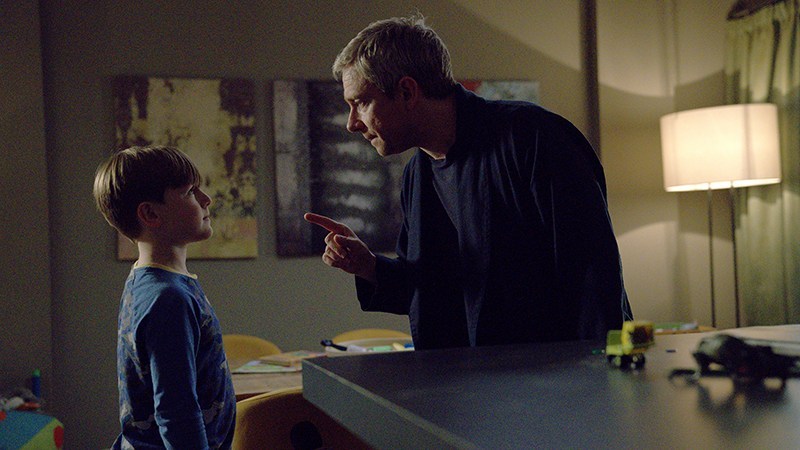 If you’re lucky enough to have kids, you’ve almost certainly had the misfortune of finding yourself consumed with a blind rage that runs contrary to your better paternal instincts. Such is the jumping off point of the premiere episode of the new FX comedy Breeders.

The opening scene of Breeders finds Paul (Martin Freeman) sitting at his laptop, desperately trying to ignore the thunderous racket coming from the next room. A beaten man, he stands up and starts to walk towards the door, along the way giving himself a pep talk, a gentle reminder to keep his cool. Suffice to say, he fails miserably. As he opens the door, a torrent of vulgarity comes rushing forth from the depths of his soul. It is a wildly cathartic and amusing moment to witness as a third party — if you can get past the fact that is some of the worst parenting ever depicted on TV by a putative protagonist.

The profanity should come as no surprise given that Breeders’ is the creation of Simon Blackwell, who has written for The Thick of It, Peep Show, and Veep, three truly great sitcoms that habitually explored the darker corners of the human soul.

The writing isn’t all just F-bombs, however. Black does a masterful job of setting in motion a chain of events that often involve Paul and/or his wife Ally (Daisy Haggard, whose comic timing is impeccable) giving in to their baser instincts, only to suffer a karmic backlash that brings them to their knees.

There’s also some great commentary in the premiere episode about how we are needlessly poisoning our kids’ minds with fears, fears that shouldn’t even occur to a 7-year-old. Paul and Amy spend the episode taking shifts staying up with the kids because the eldest, Luke (George Wakeman), is gripped by turns with a mortal terror of fires, robbers and drowning.

While Paul and Amy struggle with raising their kids, they simultaneously must deal with their aging parents. Paul’s parents are happily married, but bicker like any couple that’s been together for 40-plus years — when he complains that his cane makes him look old, she doesn’t miss a beat: “It’s your face that makes you look old.”

Amy’s parents are the polar opposite. Her mother, Leah, is beautiful, stylish, a wee racist (just ask her, she’ll assure you she isn’t) and monumentally self-absorbed; Michael McKean, in a role that is the polar opposite of Chuck McGill, plays Amy’s dad, Michael, a boho wanderer who lives out of a bag and offers to make dinner using things he’s foraged on a nearby embankment. The inevitable reunion of Leah and Michael promises to be a grand old time.

What sets Breeders apart from other recent shows that offer an unvarnished view of parenthood — Catastrophe comes to mind — is that Paul isn’t really hiding his weakness and rage from his kids. Rather than taking out his frustrations on a car or a gun range or a younger woman, he is constantly saying things to his son that should never be said. If you saw a friend talk to their kid this way, you’d probably do the thing all parents dread: criticize a fellow parent. But, hey, it’s make-believe, so…

Breeders attacks the lives of upper-middle class parents like a piñata, hacking away at the flimsy artifice that easily gives way, releasing a slew of unhealed wounds, petty jealousies, neuroses, anger and petty grievances. And like greedy children, viewers will leap to the ground to scoop them up and and enjoy the delicious treats, because we’re nothing like that. No, no, not us.

Watch the premiere of Breeders on Monday, March 2, at 10pm ET on FX