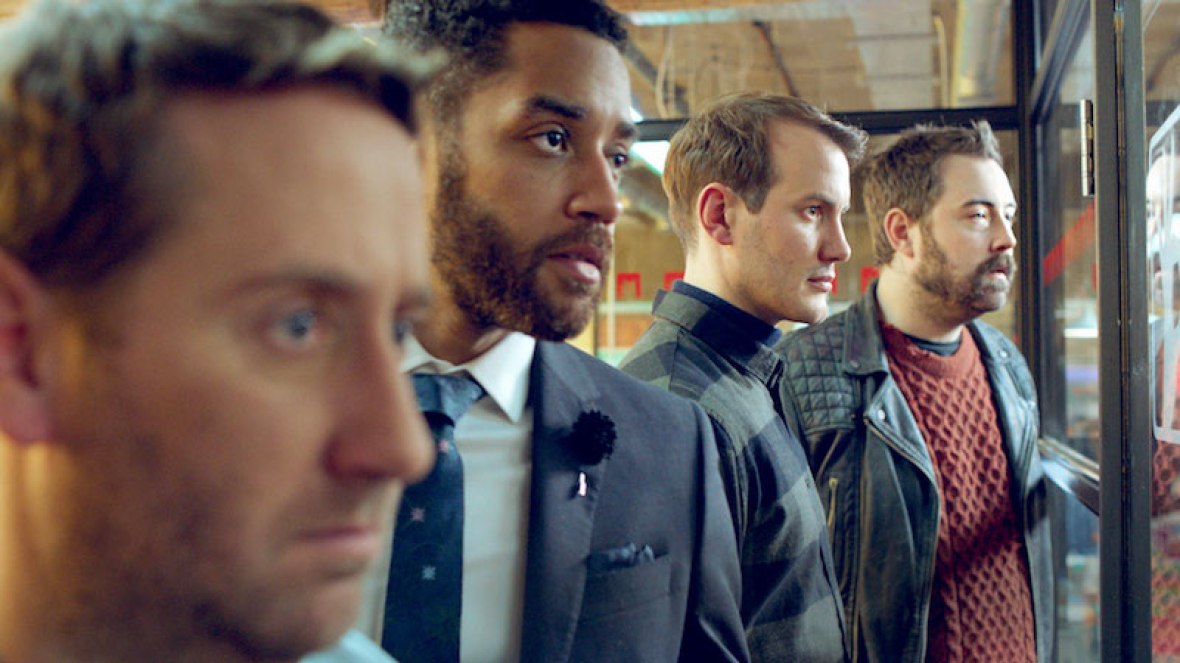 “There’s never been a more insensitive time to be a millionaire.”

We are not exactly at a loss for shows about the craziness of technology and the tech industry, with USA’s Mr. Robot, AMC’s Halt and Catch Fire, Black Mirror on Netflix, and HBO’s Silicon Valley among the most critically acclaimed series of the last few years. But where Mr. Robot and Black Mirror are primarily about the dread of how tech is insidiously taking over our lives, and Silicon Valley and Halt and Catch Fire are comedic and dramatic (respectively) takes on ambition and competition within that world, we have yet to see one that focuses on what comes after success.

Loaded, a British comedy that made its American premiere two weeks ago on AMC, does just that, picking up with the moment that four close friends have 14 million pounds deposited in their bank accounts — each — after selling their mobile gaming company to an American corporation.

Josh (the anxious taskmaster), Leon (the hedonist eager to celebrate), Watto (the troubled genius) and Ewan (the low-esteem people-pleaser) are equal partners in Idyl Hands, a startup whose wildly popular smartphone app Cat Factory has led to the company being purchased for over £300M, and their first move is to serenade the venture capitalists, bankers, and other sundry associates who stood in the way of their success with a barbershop quartet singing a memorably profane kiss-off at their doorsteps. Soon enough, Leon (presumably also the mastermind of the barbershop stunt) is also bathing in champagne and goading his partners to join him in the tub, then buying a Ferrari.

But that’s not how everyone responds to the sudden success: Josh interrupts the office celebration to wring his hands about a glitch in the app, Watto struggles to stay on the wagon when it’s revealed that the idea for the app may have been inspired by a fellow co-worker’s tattoo, and mild-mannered Ewan, eager to prove that he is actually a co-founder to a newer employee, impulsively gives her an abnormally large bonus that quickly ripples out of control.

Roger Ebert famously said that a movie isn’t about what it’s about, but how it’s about it, and so while this show is about tech millionaires, it’s about the way sudden success changes people, both the successful and the people around them. By the end of the first episode, the same guys who could barely fathom having £14M each is gravely mourning that they are down to £12.5M. That kind of loss of perspective is an interesting toy in the right hands, and early indications are that Loaded has a worthy pair. The addition, late in the pilot, of Mary McCormack as Casey, the American executive whose company bought Cat Factory and who will be working closely with the founders to keep the product viable and to clean up their PR messes — which, this being a comedy, we can assume will be in ready supply — helps to sharpen things a bit, as McCormack warns her charges, “think of me as a sexy Darth Vader.”

The four friends, who had been roommates in a squalid flat prior to their big sale, decide to stay roommates in a giant mansion by the end of the pilot, and the five principals (counting McCormack) all have some runway for future plotlines. Since it’s a British import, none of the performers (not counting McCormack) were familiar to me, but by the third commercial break they had all endeared themselves enough to want to see where things go. Leon continues on his quest to rub his success in the face of his naysayers, Josh tries to win back his ex-girlfriend with the help of his new fortune, Watto tries to hold on to his roots as a starving musician, and Ewan — who Casey insists on calling “Bewan” even after he corrects her — tries to find the spine to stand up for himself. Meanwhile, the quartet is forced to confront the terms of their deal, which includes coming up with a follow-up to Cat Factory that will deliver the 13% annual growth they promised their parent corporation, under Casey’s close, acerbic oversight.

It would be a little too facile to call this show a cross between Entourage and Silicon Valley, and while that description at least gets you in the ballpark, the tone and the energy of the performers is very different, from either of those shows, thanks to a healthy dollop of the cringe humor that the British do so well. McCormack is particularly enjoyable, particularly once she arrives in the Idyl offices and starts interacting with the founders face-to-face; her sheer brash American-ness injects a pleasing counterpoint into the proceedings.

It’s hard to see where this show goes in season 2 or 3, but on the strength of the first two episodes, this first season looks likely to finish strong. Then again, that’s the great thing about British TV — they tend to end shows before the ideas run out and leave us wanting more.

One thing I wanted more of: episode 2 guest star Nigel Planer, who I will always remember as Neil on the ’80s BBC sitcom The Young Ones. (I don’t think he’ll be back, though — unless Idyl Hands invents a way to raise the dead.)