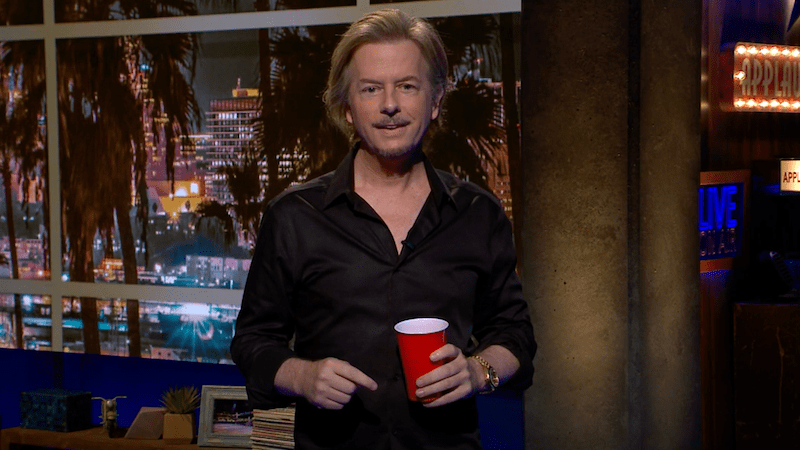 Going back to 2003’s Dickie Roberts: Former Child Star, David Spade’s movies have averaged a score of 22.5 on Rotten Tomatoes. His last successful TV series was Rules of Engagement, which ended in 2013. Given all this, one might reasonably be unmoved the news that Spade now has a late-night talk show, Lights Out with David Spade. That would be a mistake.

While his film and TV work of late may have left something to be desired, Spade has been regularly hitting the talk show and podcast circuit, recollecting amazing anecdotes from 30 years in showbiz and a childhood that was far from traditional. For instance, his single mother used to drop her three boys off at the edge of the Arizona desert, seven miles from the gas station where she worked and told her boys to make there way there. Fear not, they had packed lunches, a first-aid kid, guns, and a quarter to call in case something went wrong.

All of which is to say that Spade is a very funny man with a lifetime of experiences from which to draw, making him the perfect talk show/podcast guest, so why not flip the script and make him a host?

Lights Out is perhaps the lowest-budget talk show in TV history, almost aggressively so. There’s no band and no sidekick — just Spade, two or three guests, and a couple of pre-taped bits. Costs are kept so low that on one episode, an extra guest, Bachelor in Paradise host Chris Harrison, shows up and is offered a folding chair. Yet the show’s frugality is part of its charm. Lights Out is just Spade loafing on his sofa with a couple of friends making jokes at the expense of people in bizarre news stories, as well as morons on social media, whom Spade calls “Like Hunters.”

Because the format is so loose and Spade creates an anything-goes atmosphere, the jokes can get steep and sometimes the panelists will go knives out on each other — but it’s all in the name of comedy. Kevin Spacey recently did a poetry reading in Rome, inspiring actress Natasha Leggero to quip “He was on his way to the Vatican to accept a lifetime achievement award.” Later, Spade mentions that Jeffrey Epstein’s helicopter is for sale for $3 million, which Spade considers a bargain since you can’t get pregnant in it — “if the girl hasn’t reached puberty.” And when Spade cracks that Leggero and her co-guest/husband Moshe Kasher got married for likes, Chelsea Peretti dismisses that theory as nonsense because “when two anonymous people get married…” before letting her voice trail off.

That Comedy Central has chosen to air Lights Out directly after The Daily Show is an indication that they feel they’ve got a potential hit on their hands, but it seems like an odd pairing. Where The Daily Show leans hard left and can be earnest at times, Lights Out simply DGAF about niceties. Comedy Central president Kent Altermen has said they wanted to make a show for people with “Trump fatigue.” If there are enough people who can enjoy both shows, maybe there’s hope for America yet.

New episodes of Lights Out with David Spade air at 11:30pm ET Monday through Thursday on Comedy Central; recent episodes are available on demand.