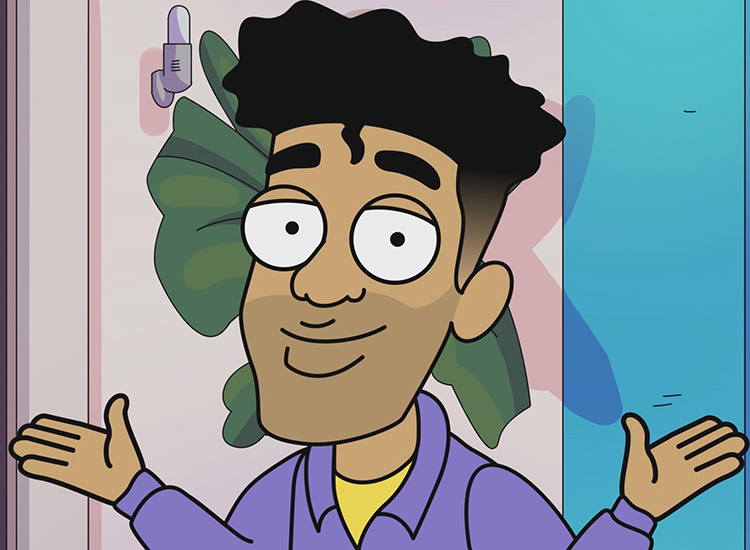 2020 has left many of us nostalgic for a simpler, more innocent era when our biggest problems were deciding which cereal to eat with our Saturday morning cartoons. With its bright colors and adorable animation, Sugar and Toys will have you grinning like a six-year-old, but the characters’ off-color jokes and topical adult references will leave you laughing like the grown-ass person you are.

The show’s second season premieres Sunday night on Fuse and like last year, the rapper and actor Kyle acts as the show’s host. But, like basically any show that was filming this year, the pandemic forced a few changes.

“Initially, the entire show was supposed to [include] these cutscenes where I am an in-person host, almost in a Blues Clues kind of sense,” Kyle told Sling in a recent phone interview. “Due to COVID, we had to reimagine how we’re going to do this, because we didn’t want to not work on the show, and we wanted to keep those 'Kyle hosting it' aspects alive. So we decided to take the whole thing and just make it all animated. Which has been hella fun for me because I haven’t really had an opportunity to do much voiceover work, so this is really my first time.”

And what did he think of his animated avatar?

“When I saw myself drawn for the first time, I definitely had to let out a big laugh, because it was pretty accurate,” he says with a chuckle. “Because obviously, I look goofy because it’s a comedy cartoon. But it’s not that far off. I feel like that’s what I probably look like in real life to people.”

Beyond Kyle's segments, Sugar and Toys features short sketches that mock pop culture, and hip-hop in particular. Season 1 fans will be delighted to know the season premiere features another hilarious Drizzy sketch, along with funny skits on Lizzo and Quavo. When asked how the show balances its funny jabs at celebrities without ever feeling mean-spirited, Kyle says, “It all stems from just letting people know it’s not malicious intent.”

“I think a lot of pop culture is always a touchy subject when it comes to comedy because you’re making fun of famous people essentially,” he continues. “And you’re making fun of society as a whole and where these famous people play into it. So it’s really just about trying to make sure that all the jokes are coming from a place to try to actually speak on something socially, and then also letting it be known that it’s just a joke too.”

To his point about socially aware comedy, the new season features some very timely jokes on the pandemic, cultural appropriation, and a Watchmen parody featuring President Obama as Dr. Manhattan.

“It’s like, imagine you’re Obama and you just gave eight years of yourself to this country, trying to make this world a better place. And then Trump comes around and really, you should just be taking a long-ass vacation,” he says of the idea behind the sketch. “Meanwhile, we’re on the brink of civil war and there’s a pandemic and [climate change] destroying the globe. It was just really funny, like, I wonder what it feels like to be Obama right now?”

While most of the jokes come from a place of love — “A lot of these rappers are people I obviously admire and look up to, so I just hope they watch the show and think this shit’s as funny as I do,” Kyle says — there’s a certain humorless celebrity who probably won’t like the way he’s depicted on the show.

“We will for sure be roasting Trump up in there. That’s what I’m probably most excited for, is the reemergence of the Trump dinosaur. He’s the best,” Kyle says. “There’s no better way to make fun of Donald Trump than turning him into a dinosaur with little hands.”

That blend of edgy and whimsical is the sweet spot for Sugar and Toys.

“I think that’s the point of the show, trying to address issues and the social climate as it is in the moment,” Kyle says. “2020 has been the most insane year of my life and probably anyone else’s life….and we’re trying to include that as much as possible, so people can relate to it, relate to what it actually felt like to be around this year.”

A surreal cartoon that's both absurd, socially conscious, and darkly funny? Yeah, not a bad description of 2020 thus far.

Season 2 of Sugar and Toys premieres Sunday, Sept. 21 at 11pm ET on Fuse. Follow the link below to subscribe to Sling right now.