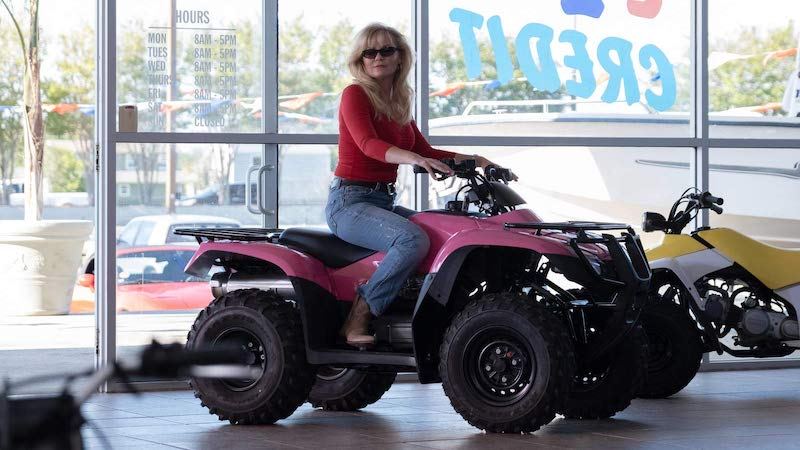 Easily earning the 2019 crown for unrevealing, unwieldy titles, On Becoming a God in Central Florida tells the story of Krystal Gill (Kirsten Dunst), a blue-collar mother often forced to bring her newborn to her dead-end job at the local waterpark, and her husband Travis (Alexander Skarsgård), an insurance salesman who also works nights and has invested two years (and an undisclosed sum) in the Garbeau System, a cult-ish Ponzi scheme that promises wealth beyond your wildest dreams.

The first 30 minutes of On Becoming…. are amusing in their condescending way as it reveals the Garbeau System to be little more than an olde-tyme revival movement that dangles wealth instead of salvation. Then the crazy gets turned up to 11 with one of the best head fakes in recent memory and you find yourself sitting up, turning over your phone and surrendering fully.

Dunst has been starring in movies since she was six, beginning her career opposite the likes of Woody Allen, Tom Hanks, Brad Pitt and Tom Cruise and had dozens of film credits before she kissed Spider-Man or brought it on. She’s been around forever. But in the 2015 second season of Fargo, she was a revelation. At the center of a stacked cast that also included Ted Danson, Jean Smart, and (her future husband) Jesse Plemons, Dunst stood out as a beautician deeply invested in a self-actualization system that she just knows will unlock the secrets to being rich. Sound familiar?

Here, again, Dunst delivers the goods as a blue collar woman who’s sick of it all. As she growls to her husband during an argument about his intention to quit his job and dedicate himself to the Garbeau System full time, “I won’t be poor again.” This is a woman at the end of her rope who’s becoming aware of her need to do whatever it takes to ensure the financial stability of her baby. If her husband wants to join her, great. Otherwise, she is going full steam ahead without him. When she ultimately meets Obie Garbeau II (the great Ted Levine, in all his huckster Colonel Sanders glory), the leader of the Garbeau System, she sees an opening, a crack in the door, and decides it’s time to kick it in.

Skarsgård emerged on the pop culture scene in the HBO series Generation Kill as the golden boy everyone called Iceman — he was brave and strong and gorgeous. Skarsgård would go on to leverage his looks in True Blood for seven seasons, and more recently, season 1 of Big Little Lies. Of late, however, he’s forsaken the moneymaker; for On Becoming… as he did in The Long Shot, he sports an awful haircut and some questionable teeth. You have to hand it to him, he commits fully to the character here, imbuing Travis with an earnestness that would be endearing if it weren’t so woefully misguided.

Perhaps the best performance in On Becoming… comes from newcomer Théodore Pellerin, who made his US television debut earlier this year in The OA. Here he plays Cody, the young man one step up the pyramid scheme from Travis, a combination boss/Svengali, who keeps Travis focused and motivated on roping in other rubes. Every one of Cody’s gestures is overdone, as he is desperate to ingratiate and flatter whomever his audience is. It’s the kind of performance that is so spot-on a viewer can’t be blamed for wanting to punch Cody in the face.

The vibe of On Becoming… is definitely Coen-adjacent, if not quite as smart, but to say a TV series falls short of the Coens’ wit is hardly a damning indictment: You could fill a library with great art that isn’t as smart as the Coen brothers. On Becoming… is smart and funny, the cast is all-in, and the mayhem Krystal is prepared to unleash is too good to ignore.

New episodes of On Becoming a God in Central Florida air at 10pm ET Sundays on Showtime; all aired episodes are available on demand.