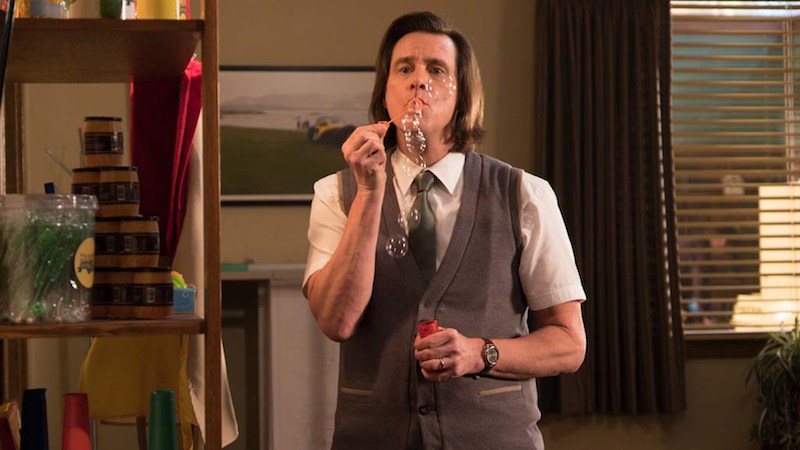 “Feel it and you can heal it,” sings Mr. Pickles. “Isn’t growing up funny?”

Showtime’s new half-hour dramedy Kidding, starring Jim Carrey as a kids TV host in crisis, is freighted with an odd mix of expectations, coming as it does after the rapturously received Won’t You Be My Neighbor?, the Mr. Rogers documentary whose trailer brought at least one reviewer (who may or may not be typing this right now) to tears, and the Netflix feature Jim & Andy: The Great Beyond, which gave us our first glimpse of the onetime World’s Biggest Movie Star in years, appearing more introspective than ever.

Firstly, it’s Carrey’s return to TV, 30 years after his career took off on In Living Color, way back when Fox only programmed one night a week. Secondly, it’s his return to screens in general, after years of total ubiquity and a well-deserved step back from the limelight: 2014’s Dumb and Dumber To was his only starring role since 2011’s Mr. Popper’s Penguins. And, as both Jim & Andy, where he professed that “There is no Jim Carrey,” and a recent magazine profile showed, 2018 Jim Carrey is not the manic ambition monster of the ‘90s and 2000s; he’s significantly mellowed and greatly humbled, more interested in painting political cartoons and exploring the nature of self than talking out of his butt in a movie.

Pour all of that into the premise of a TV personality universally beloved by kids of all ages suffering through the dissolution of his family, and it’s hard to know what exactly to expect. Is it a silly comedy? Is it a pitch-dark drama?

Based on the first episode, premiering this Sunday on Showtime and available now on demand, and the choice of Michel Gondry to direct all eight of the season, the answer is that at least tonally, the show resembles Gondry’s prior collaboration with Carrey, Eternal Sunshine of the Spotless Mind, and his prior collaboration with Catherine Keener, Being John Malkovich: bleak subject matter punctuated with moments of desert-dry comedy.

And how’s this for bleak subject matter: Jeff Pickles (Carrey) has been hosting Mr. Pickles’ Puppet Time for 30 years, assisted by his puppeteering sister Dierdre (Keener) and his executive-producer father Seb (Frank Langella), even through the death of his son Phil in a car accident. As the show opens, it’s been a year since that accident, and though Jeff is still an icon to everyone who grew up with him — which is nearly everyone under 35 — things are falling apart behind the scenes: his wife (Judy Greer) has asked for a separation and is dating someone else, his other son, Phil’s surviving twin Will (Cole Allen) has become bitter and remote (the true reason Will needs all his winter clothes in the middle of the summer provides both the pilot’s biggest laugh, and some depth for the character), and Seb won’t allow Jeff to do an episode about death, reminding Jeff, “the haircut, the vest, the tie… you’re not a man, you’re a brand.” I don’t want to spoil anything, but suffice to say, if Jeff accepted that pronouncement, this would be a one-episode series.

As befits a series boasting the TV return of Jim Carrey, Kidding’s cast is otherwise loaded: Langella follows his stellar turn on The Americans by providing a firm, steady, paternal presence that few can match; Judy Greer is less overtly comic than we tend to see her, but gets off some great lines (refusing lunch with Jeff, she deadpans, “I have my wine club, and that’s more fun on an empty stomach.”) And Catherine Keener is terrific as always, dealing with a family crisis of her own with the same compartmentalization that all of Kidding’s characters seem to have in common. And Carrey himself is in his more subdued, Eternal Sunshine mode, with a touch of his Andy Kaufman persona, which was itself always somewhat modeled on children’s television, showing childlike naivete even as his world collapses around him. At least through the pilot, he’s something I never thought we would see Jim Carrey be in a comedy: the straight man. Isn’t growing up funny?

Kidding premieres at 10pm ET Sunday on Showtime; the pilot is available now on demand.