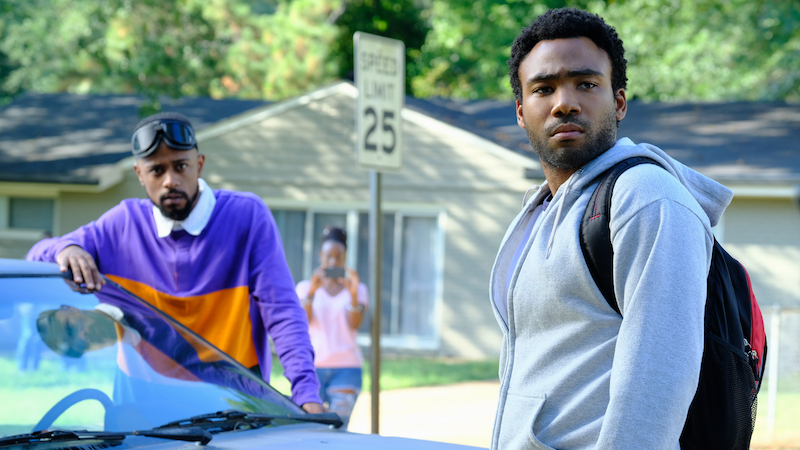 It has been a long wait, as creator and star Donald Glover needed a little extra time off to pay Lando Calrissian, but the best show of 2016 is finally back and, judging by the three new episodes sent to critics, better than ever.

Atlanta’s strength has always been twofold: its facility with tone, easily moving from drama to comedy and back without ever feeling like it’s cheating, trafficking in unearned sentiment, or contriving plots for the sake of easy laughs; and the perfect marriage of its three main performers (Glover, Brian Tyree Henry, and Lakeith Stanfield) with their characters, unique on the page even before they’re so precisely drawn by the actors. Earn (Glover) is a perpetually broke Columbia dropout who trying to help his cousin Alfred (Henry) turn his local celebrity as an up-and-coming rapper on the rise into real money, with occasional help (and constant non sequitur commentary) from Alfred’s oddball pal Darius (Stanfield).

Season 1 was the most celebrated thing on television, winning Emmys, Globes, TCAs, Critics’ Choice, AFI, Peabody, and just about every other award this side of a Nobel Prize, thanks to some thoughtful storylines that incorporated ideas about race, class, celebrity, crime, parenting, masculinity, and the media, all through the lens of a group of decent people trying to get by if they can’t get ahead.

As season 2, subtitled Robbin’ Season, begins, Earn is still broke and living in a storage locker, despite representing the increasingly well-known Paperboi. For his part, Paperboi — Alfred — is starting to see some money, but not as much as he’d like; in the season premiere, we learn that he’s bought his father a house, but it’s a pretty crappy house. And Darius, as usual, is on the margins, dropping head-scratchers and one-liners in equal measure.

Atlanta is the perfect name for this show, because the vivid sense of place that Glover creates in these new episodes, along with his brother and co-writer Stephen Glover and director Hiro Murai, is much more important than the plot. It feels real, and lived in, like you could step through the screen, run away from Earn and Alfred, and find another, equally compelling story with equally compelling characters. For example, in the premiere, Earn catches on to some tension between Alfred and Darius. He asks them both about it — “What’s going on between you two?” and each separately answers, “I don’t want to talk about it.” And that’s it. We never find out what happened. At the end of the episode, Alfred passes a joint to Darius, and we see that the ice between them is melting, but that’s it. Like real life.

The show is bursting at the seams with small details like that: Darius listens to old punk rock in his car; Earn and Darius wonder what flavor a Flamin’ Hot Cheeto is (answer: hot); Alfred struggles to find a new weed connection because of his growing fame; the ex-con staying with Alfred assures Earn right before he runs out of a sneaker store with three pairs of shoes, right in front of an employee, that he’ll get away because of the mall’s No Chase policy.

All three episodes I saw were terrific, but the premiere was the standout, thanks in part to an astonishing guest turn by standup comic Katt Williams as Alfred’s lowlife dad. Williams has certainly had his share of legal trouble, as well as multiple allegations of abusing women; I don’t want to gloss over that, but I was not aware of it until after I’d watched the episode, and I was amazed by the strength and specificity of his performance, so here’s hoping he’s on the straight and narrow, both for the sake of whoever’s keeping his company and so he gets more of this kind of work, because I found it much funnier than his standup.

Race, class, and celebrity are still clearly on Glover’s mind, as Earn and Alfred slowly but surely inch their way up the ladder, with and interesting plots about Earn’s difficulty spending money once he starts to get it (and not because he’s unwilling), encounters with a rival rapper who seems to be ahead of Alfred, a trip to a strip club, Earn’s relationship with Vanessa (Zazie Deetz, returning as his on-again, off-again babymama).

I fully expected Atlanta: Robbin’ Season to be excellent, and I’m still blown away by how good it is. Far from a sophomore slump, Glover and his collaborators are fully in command of their game and it is a true joy to watch.