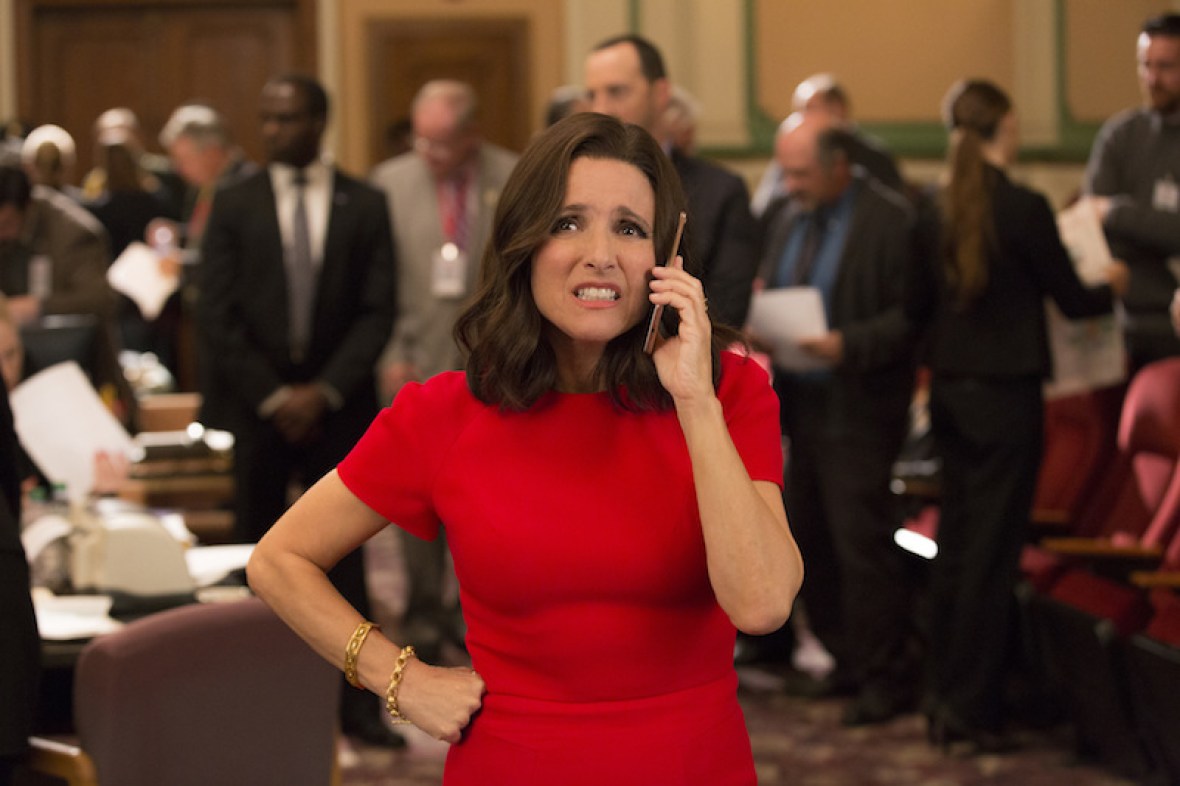 We are living in a moment where the truth, particularly the truth of American politics, is far stranger — and usually funnier — than fiction. The day’s headlines are routinely so shocking and bizarre that, if you tried to sell them to a Hollywood producer, you’d be laughed out of their office for being too unrealistic.

The great success of Veep, returning Sunday for its sixth season on HBO, has always been that it does not rely on huge plot twists or over-the-top silliness for its comedy. There are more laugh-out-loud lines — mostly in the form of brutal personal insults, casually tossed off — per episode of Veep than in whole seasons of most other comedies, and that’s largely the result of the show’s primary strength: unflinching realism about life inside the Beltway.

Through five seasons, Former President Selina Meyer (multiple Emmy winner/GOAT Julia Louis-Dreyfus) and her team are never identified as being Democrats or Republicans, because — and here’s where the realism comes in — such distinctions are largely irrelevant to the day-to-day operation of our government. Particular policies and their effects on constituents are also, at best, a tertiary concern. Washington, Veep teaches us, runs on pettiness, spite, and ego. No one does anything on this show for any reason other than a) personal advancement or b) revenge, and that, Washington insiders say, is an accurate depiction.

Of course, the show does not directly mirror any real-life events, not even the ones that have made the news the most entertaining thing on television for the last year or so; its not-ripped-from-the-headlines story closed out season 5 with Selina, who’d ascended to the presidency after her predecessor, at the tail end of his term, resigned to care for his ailing wife, narrowly losing re-election to another woman after an electoral college tie threw the election to the House of Representatives.

Season 6 picks up a year later, and with the exception of Selina’s body man Gary (Tony Hale) and inexplicably trusted assistant Richard Splett (Sam Richardson), her staff — superwonk strategist Kent Davison (Gary Cole), dyspeptic Chief of Staff Ben Cafferty (Kevin Dunn), Press Secretary Mike McClintock (Matt Walsh), campaign manager Amy Brookheimer (Anna Chlumsky), and aspiring TV pundit Dan Egan (Reid Scott) have dispersed to new jobs. Except for Jonah (Timothy Simons), who’s still representing the state of New Hampshire in Congress, I won’t reveal where they all land, as each reveal is individually hilarious — suffice to say, their characters remain the same but look even more extreme outside the protective cocoon of the Oval Office — but they all cross paths with Selina as she navigates her increasingly humiliating post-presidency, looking for a place to host her Presidential Library (not much interest in a president who served less than a year), looking for donors to fund it (tricky ethical issues there), and trying to get a foundation off the ground that will keep her in the public eye enough to get her speaking fees up.

Veep has always done an excellent job with guest casting, reliably finding comic actors with the chops to hold their own in scenes with the incredible main cast, and in the early episodes of this season we’re treated to the return of Dan Bakkedahl’s Roger Furlong, who’s so vulgar he stands out even in this crowd, David Pasquesi as Selina’s oily ex-husband Andrew, and, most delightfully, Sally Phillips as Swedish Ambassador Minna Hakkinen, as well as established improvisers Paul Scheer and June Diane Raphael in smaller roles.

I wanted to include some choice quotes from the new season, but literally 100% of the ones I wrote down are profane at best and troubling at worst. Suffice to say, the one-liner game on this show has not slipped a centimeter — just be careful who you quote it to.

If you love Veep, this season upholds the show’s impossibly high standard and then some. I screened the first three episodes here at Sling TV headquarters and laughed out loud so often I interfered with other people’s work. If you are new to the show, I can’t recommend it highly enough, and would urge you to start with season 1 (all five past seasons are available on-demand).