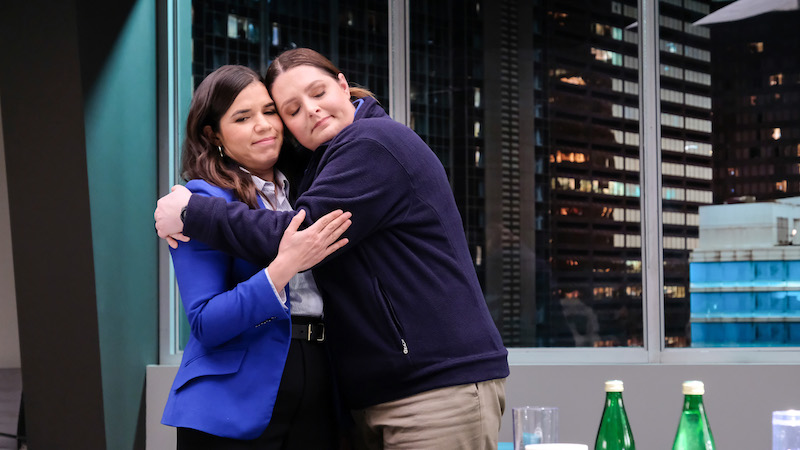 You’d be hard pressed to name many 30-minute TV shows that tackle wide-ranging issues like maternity leave, immigration, the Syrian Civl War, unions, workforce-threatening automation, and gerrymandering (and yes, we’re including the news). Okay, now take that count and narrow to include only network television comedies.

Effortlessly tackling all of the above, Superstore is in its own category. The writers’ efforts to stay authentic to the issues facing its diverse cast make it one of the best shows on television.

Perhaps the best example of this is Nico Santos and his portrayal of Mateo. Mateo was originally written as a straight-Latino character. But by instead making him a queer-Filipino-undocumented immigrant, the writers allowed Santos to draw from his own background. The diversity of this cast is the strength of this show, allowing us explore pertinent and urgent current events, like when Mateo is detained by ICE.

“You’re able to draw from these stories from my background that you wouldn’t normally have access to. I think that’s the beauty of our cast. The fact that we are one of the most diverse casts on television. We are able to draw from all of these different angles. Makes a more dynamic show.”

Lauren Ash, who plays Dina, can relate to Santos’ character even though they have completely different backgrounds. She pointed out that although deportation is a huge issue in the United States, it doesn’t necessarily effect everyone personally. She said she hopes that by addressing the subject with humor on Superstore, it may move the needle for someone who doesn’t have a connection to it.

“I think it’s interesting that a network has allowed a half-hour comedy to do some of the stuff we’ve been doing. For an actor, that automatically made me pumped because it’s like, we’re doing something that’s really unique, different, and really important,” Ash said.

Ash has also brought a little-seen character type to the screen. Dina stands out by not holding anything back, not only in terms of what she says but what she wears. Putting it all out there has made Dina one of the best characters on TV.

“Another interesting thing about that [has been] watching Dina getting to become almost a sex symbol to some people. What I think is cool about that is that traditionally, women who are my size, which is a size 12 — which isn’t plus size by the way — are not portrayed in that way on television. It’s always a story point like ‘Can you believe that this size 12 woman has a man that is interested in her?'”

“I think what’s been really cool is getting to watch her be this super sexy, super brazen character that’s desired and it’s never commented on,” Ash continued. “It’s never a story point where she’s hot for someone that size. My size has never been brought up. I’m a hot chick and I’m playing a hot chick on TV and it’s awesome.”

That thoughtfulness starts with the writing and the production of Superstore. While this has increased since its star America Ferrera added co-production duties, her input didn’t begin with her new title. In the show, Amy’s maternity leave story was written and directed by Executive Producer Jackie Clark, who was pregnant in Season 1 of the show. After Ferrera got pregnant while shooting Season 3, they would sit and talk about motherhood and working simultaneously. Their experiences were worked into the script.

“Then we got to put it on screen and I’m so proud of that that our real life experiences are funny, relatable and also connecting with an audience,” Ferrera said. “I think the diversity of our cast is what gives us the opportunity to explore just about anything. We just talk about what would be fun to explore and what we haven’t seen explored before.”

Ferrara became widely known thanks to her role as the titular character in Ugly Betty. Where Betty was all about optimism, Ferrera’s Amy has a much different outlook on life. Forget about hopes and dreams, Amy is just trying to get through the day without fighting her coworkers.

As important as diversity is to Superstore, Ferrera mostly spoke about the relatability of the plot and characters. None of these characters are doing anything out of the ordinary that most of us haven’t done already. And that’s the point. You can see yourself in this show some place or another no matter who you are.

Ferrera grew up watching comedies from Norman Lear, whose credits include Good Times, Sanford and Son, The Jeffersons and All in the Family. Many of those shows made you laugh and cry in the same episode. Ferrera said she always loved that relatable mix and that she dreamed of making that type of television.

“These are people I know and love, these are every day working class people like my family. There was so much heart and humor to it. We often watch shows about super heroes and FBI agents and serial killers. There is so much escapism in that but it’s rare when we get grounded in something that feels so relatable to every day people. But it’s also funny and a celebration of how weird and complicated and sometimes how laughably depressing life can be,” Ferrara said.

Ben Feldman, who plays Amy’s boyfriend Jonah, shared a similar sentiment. Feldman mentioned that there’s never a case where the audience should say, ‘I learned this from the show.’ Rather, he said that he wants the audience to simply see themselves in this world.

“As an actor, it’s less message and more connecting,” Feldman said. “That’s what’s important to us and that’s why these episodes tackle so many hot button, serious political topics that you’re seeing played out in real life. Not because we’re trying to cram any ideology down anybody’s throats but because we’re trying to show what normal people talk about in real life. And then we’re just putting it on television and saying, ‘how can we make that funny?'”

But the success of Superstore is also proof there’s no better escapism than seeing our every day problems on television.

“I think that’s why the show connects with so many people who are like, ‘That store is my workplace. Maybe I don’t work in a big box store but I work in restaurant and it’s pretty similar.’ I think it’s letting people see themselves and an escape from this ridiculous world and all of the crazy awful things we see on TV. And a great escape is to see the TV and see yourself in it instead.”

New episodes of  Superstore air at 8pm ET Thursdays on NBC, and Fridays on demand.