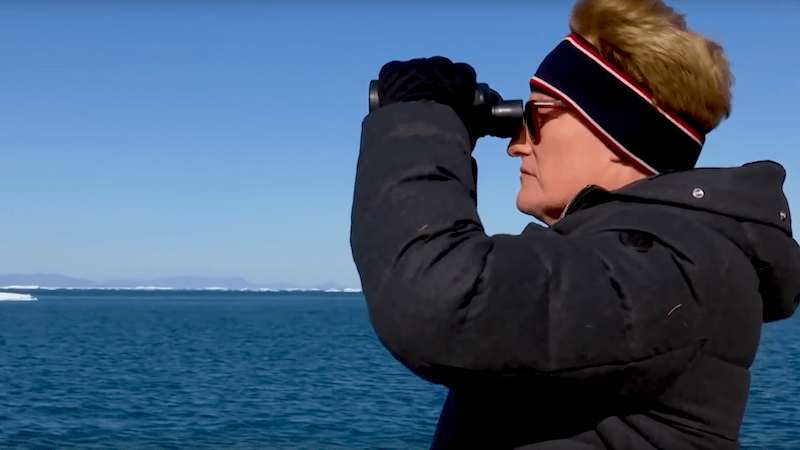 The Trump presidency has made life immeasurably easier for the writers of Conan Without Borders. In March 2017, Conan O’Brien visited the US-Mexico border in response to Trump’s desire to build a wall; in September of that year, after Jared Kushner got involved in the Israel-Palestine peace process, Conan took the show to Israel; it was off to Haiti when Trump dropped his notorious “sh#thole countries” comment; and now it’s off to Greenland to broker America’s biggest real estate acquisition since her foundational land grab.

Of all the ideas that President Trump has thrown out there, the best may have been the purchase of Greenland. Rich in minerals, teeming with fish, close to our shores, lots of opportunity for economic development… what’s not to love? Of course, there are two sides to every real estate transaction, so Conan O’Brien decided to set off for Greenland to lay the groundwork for the biggest deal of the 21st Century. Tragically, the Greenlanders don’t seem too psyched about the idea.

Conan Without Borders: Greenland finds Conan deplaning in Nuuk, the nation’s capital, largest city, and home to roughly a third of its 56,000 residents. As he works his way down a small informal receiving line of airline workers, he shakes each hand and announces with joyous American arrogance, “I’m here to buy your country,” a declaration met a varied mix of laughter and discomfort.

As his host/guide Vivi (Veevee?) drives him, she points out the golf course, which Conan likens to “driving into a quarry,” and suggests features a par 10. When he asks her if she’d like to be part of America, she demurs with a defiant smile; when asked why not, she declares, “Because you’re all fat.” His plea that only 90% of us are fat falls on deaf ears.

At the hotel (you’ll notice the article “the” is used quite a bit, indicating that there’s just the one), he opens negotiations with a reluctant hotel desk clerk at 8,000 Danish kroner, an offer he dismisses by noting “You can’t even buy a new phone for that… maybe an iPhone 5.”

Vivi later takes him home to have an authentic Greenlandic meal that goes about as well as you’d expect, as she lays out for her celebrity guest that includes lamb, whale skin salad, a chunk of seal fat the size of a softball, shredded dry seal and dried fish. Keep your eyes out for the bowl of soup Conan opts for while seated with her family.

The most engaging local that Conan meets has to be Kim, an artist who does a killer Schwarzenegger impersonation. The cultural divide between Greenland and America is never more stark than when Kim tells Conan that he proposed to his wife on the occasion of her killing her first muskox and presented her with a ring carved from a walrus tusk.

Conan also chats with a man who looks like an actual descendant of Vikings, is the subject of a local television news story, tries to give the weather report on the same broadcast in the local language, makes some suggestions for sprucing the place up a bit, discusses the deal with two members of parliament and gives someone a red hat with white lettering that read MAKE AMERICA GREENLAND ALSO. Though he heads home emptyhanded, Conan’s trip to Greenland has to be considered a success.