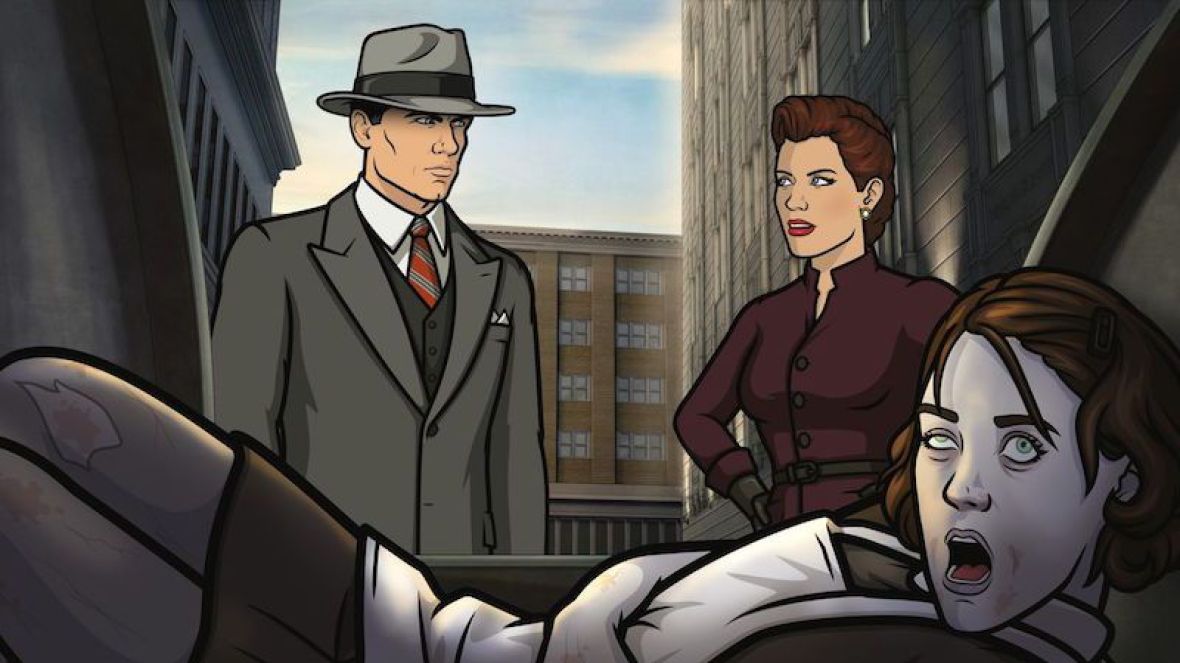 Season 8 of Archer begins where the previous season left off, with Sterling Archer floating face down in a swimming pool, his body riddled with bullets, in a scene reminiscent of the opening shot of the noir classic Sunset Boulevard. But unlike his Sunset counterpart, Archer is not dead, merely in a coma, during which he overhears his mother and Lana discussing the death of Archer’s dearly departed valet, Woodhouse. Archer’s subconscious twists this revelation into Woodhouse having been murdered, and resolves to find his killer. Set in a Raymond Chandleresque post-WW II Los Angeles, Archer: Dreamland is another freewheeling piece of gonzo comic insanity that at times gets really, like, really, dark.

It turns out that as in life, so it was in Dreamland that Woodhouse was a heroin junkie, and it finally caught up with him, as he’s gunned down in a back alley, apparently for being in arrears on his drug habit. Archer comes upon his corpse around the same time as two cops, Figgis and Poovey, who point him to Woodhouse’s heroin dealer, Krieger, who also works as a bartender at Dreamland, a nightclub run by a hard-drinking cougar who goes by the name of “Mother,” who happens to have a gorgeous and mysterious torch singer named Lana working for her. Mother agrees to help find the killer, but only if Archer helps her find some dirt on her archnemesis, Len Trexler. But things don’t heat up until Charlotte VanderTunt, “heiress to the vast VanderTunt publishing fortune,” approaches Archer to help her fake her own death. Charlotte, aka “Cheryl,” was always bit a wild of a wild card with her love of violence in all its forms, even — or rather, especially — when it’s turned toward her in a sexual manner. In Dreamland she is at her peak of sadomasochistic lunacy, and it is a joy to behold.

The season features a number of great guest stars and cameo, most notably Jeffrey Tambor, who famously played opposite “Mother” voice Jessica Walter on Arrested Development, as Trexler. Eugene Mirman returns to reprise his role as Cecil Tunt, billionaire brother of Cheryl/Charlotte, and is even more demented than ever before. And episode 3 features the voices of Keegan-Michael Key, Wendell Pierce, and Wyatt Cenac as bandmates of Ray, who has a bad habit of getting a little too excited about smoking weed with the guys, and sets up Archer to talk about race in the sort of ham-fisted way that only he can. And, of course, Dreamland is peppered with a healthy dose of nods to numerous noir touchstones, like the previously mentioned Sunset Boulevard and Chandler’s The Big Sleep, as well as Chinatown and The Maltese Falcon, along with the countless other cultural references the likes of which have been part of the show’s repertoire for years.

And Barry is back, more psychotic and sadistic than ever before, as Dutch Dylan, one of Trexler’s henchmen. As is his custom, he gets bested by Archer and vows to exact a revenge most deadly, leaving a trail of bloody corpses in his wake.

One of the oddities of Dreamland is the intense, almost Sin City-level of violence and gore. Archer has never been suitable for kids, but they really take it up a notch here, with Krieger, not surprisingly, having a hand in things. It’s not a dealbreaker, but it’s jarring. Dreamland’s weakness is Archer’s series of PTSD-inspired flashbacks to his time in the war, which aren’t all that funny and don’t do much to move the plot along, a rare misstep from a collection of writers who are typically spot-on.

Archer: Dreamland is a little slow getting out of the gate, as they play it a little too much like actual film noir, but hang in there, because once Charlotte VanderTunt comes on the scene, things get the best kind of weird. All the classic Archer gags are here, there’s sexual innuendo of the most depraved kind, and everybody’s snapping off whip smart zingers, the only big difference being that it’s all topped off with a crisp fedora tilted at a rakish angle.

Season 8 of Archer is available on-demand on FXX.