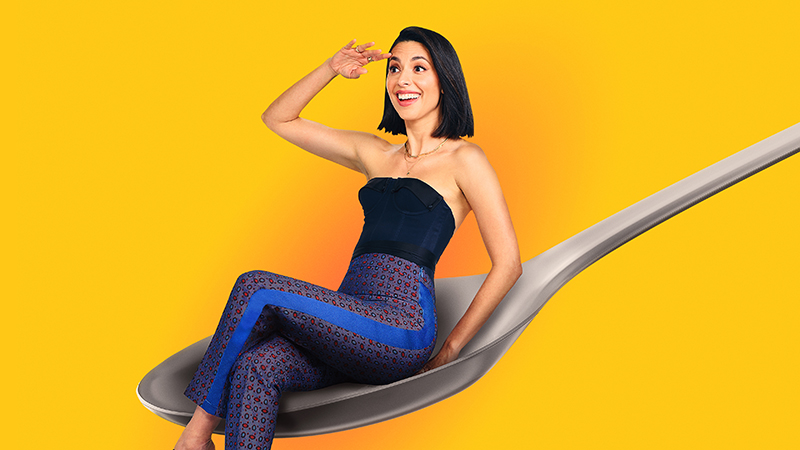 Back in 1991, a virtually unknown actor named Greg Kinnear was introduced as the host of a new show, Talk Soup. In the years before the Internet swallowed our culture whole, it was the perfect vehicle by which to witness the very best (or maybe worst?) of every other talk show on TV. Talk Soup, a talk show about talk shows, was meta before everything was meta. Now, 29 years since its debut and five years since riding into the sunset, The Soup is back on E!.

The original iteration with Kinnear lasted until 1995, when he was replaced by John Henson, who in turn gave way to Hal Sparks in 1999, and Aisha Tyler taking the baton in 2001. A year later, the show would leave the airwaves only to be reborn as The Soup, with new host Joel McHale. McHale brought a lethal mix of charm, snark and smugness that kept the show on the air for more than 11 years and led to McHale’s starring role on the cult sitcom Community. Comedian Jade Catta-Preta is taking over from McHale starting February 12.

The show’s five previous hosts have enjoyed varying degrees of fame in the wake of their Soup time. Let’s break them down:

#5. John Henson (1995-1999) Henson had been kicking around LA as a standup when he got his big break as the Kinnear’s successor. He held onto the job for five years before leaving for greener pastures, but they never quite materialized. Henson appeared on a few other short-lived talk shows before hosting the game show Wipeout!, an American take on Japanese game shows in which contestants must navigate a brutal obstacle course. Henson has made a nice living for himself, but he’s hardly a household name.

#4. Hal Sparks (1999-2000) Sparks wasn’t around long, but he would become a series regular for several seasons of Queer as Folk and Lab Rats, while also making several one-off TV appearances. Few people know his name, but plenty of people recognize him and he’s worked steadily for the past 20 years.

#3. Aisha Tyler (2001-2002) Funny, smart and good-looking, Tyler wasn’t long for Talk Soup, but she has since hosted or appeared on an endless string of shows: She was Ross’ girlfriend on Friends for a half-season, she voiced Lana Kane on Archer starting in 2009, she spent six years on The Talk, and starred on the last six seasons of Criminal Minds. Tyler has enjoyed a great run and she keeps on working.

#2. Greg Kinnear (1991-1995) Kinnear went straight from Talk Soup to the remake of Sabrina starring Harrison Ford and Julia Ormond, where played Ford’s younger ne’er-do-well playboy brother, a role originated by William Holden. Three years later, he was nominated for Best Supporting Actor for his work in As Good As It Gets, in which he plays a gay man who is the victim of a brutal hate crime. Since then, Kinnear has appeared in more than 40 films, but hasn’t become a force at the box office or on the awards circuit.

#1 Joel McHale (2004-2015) Five years into his run on The Soup, McHale landed a role on Community as Jeff Winger, reluctant leader of a group of misfits struggling to finish their degrees at a bootleg community college in fictional Greendale, Colorado. Not only was Community one of the funniest and most inventive sitcoms ever, it was also incredibly prescient about all manner of social issues and was a springboard for a ton of talented people, including Donald Glover, Johnathan Banks, Allison Brie, showrunner/ creator Dan Harmon (Rick and Morty), and director/producers Joe and Anthony Russo (Avengers: Infinity War and Endgame). McHale may never have the movie career of Kinnear, but come 2050, way more people will be watching Community than any Greg Kinnear movie.

Catch the premiere of the newly relaunched The Soup at 10pm ET on Wednesday, Feb. 12 on E!.