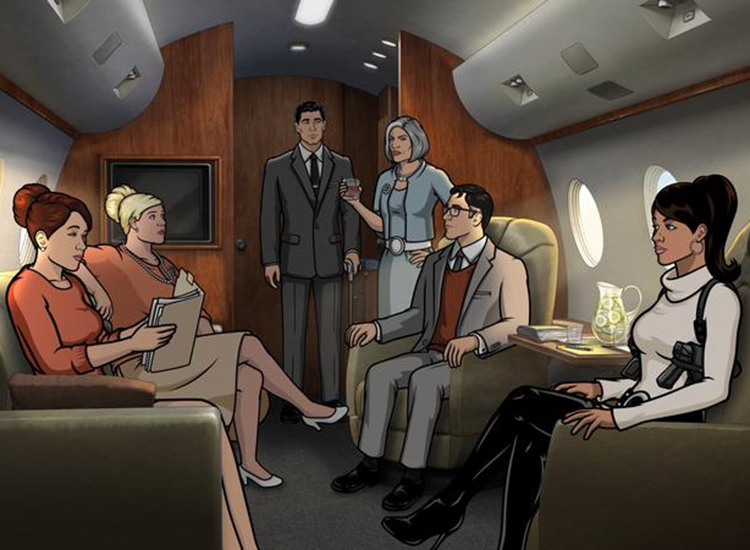 Imagine waking up from a coma in the year 2020. “Yikes” doesn’t even begin to cover it.

Such is the case for newly awakened spy Sterling Archer, the central character in the long-running FXX animated spy comedy Archer. As Season 11 opens, Archer has just awakened from a three year coma to find that, between a pandemic, social unrest, and devastating climate change, the world around him has fallen apart and his friends and colleagues have crumpled like used fast-food wrappers. Just kidding: That’s our world, his world is doing just fine and Archer’s friends, lovers, and professional acquaintances are all thriving in his absence.

So in this respect, the Archer-verse is vastly different from ours. But in many others...it’s kinda like ours a little bit if you squint, maybe? At the very least, it’s more like ours than what we’ve seen in the past three seasons of Archer. Wait, you don’t remember what the world of Archer was like before he was shot by Veronica Deane and lapsed into a coma in the Season 7 finale way back in June of 2016? Well my friend, you’re in luck: Let’s jump back in the saddle and take a ride down Memory Ln., shall we?

How did he end up in a coma?

It’s literally right up there, two sentences before this. Keep up, please.

OK fine, the full version is that, after relocating to L.A. and relaunching their spy agency as a private investigation firm, the crew gets mixed up in a series of murders on the set of “Deadly Velvet.” After Veronica spills her plan to pin the murder on Archer’s ex-girlfirend/ baby’s momma/ perpetually put-upon colleague Lana Kane, she shoots Archer, and leaves him for dead face-down in her swimming pool. It’s honestly a little shocking.

Oh snap! What happens next?

As Season 8 opens, the crew is at a funeral...for Woodhouse, Archer’s trusted valet. We then find Archer’s mother and boss, Malory, watching over his bedside, where he’s been comatosed for nearly three months. As she wonders what he’s thinking about, we zoom into Archer’s face...and discover he’s now a post-WWII PI searching for the person who killed his partner, Woodhouse. The eight-episode season — subtitled “Dreamland” — is a surprisingly dark comedy-noir built around this mystery.

Sure is, but it’s nothing compared to Season 9 (Archer: Danger Island), where Archer is reimagined as an Indian Jones-style adventurer who’s marooned on an island filled with colorful locals, sidekicks, and rival swashbucklers.

Prior to its debut, Executive Producer Matt Thompson teased the new season with the following: “We basically stuck all these people on this tiny volcanic island, and we’re just going to have as much as fun as we can, with quicksand, cannibals, super-intelligent monkeys, and a volcano, and a talking f**king parrot.” Mission accomplished.

You’re darn right that’s what's next! Archer: 1999 leans heavily into the tropes of ‘70s sci-fi, from Star Wars to Alien to Lost in Space. The setting gives Archer the opportunity to showcase its often overlooked animation style and the clever reimagining of the various characters into new roles — particularly Pam Poovey as a hulking but reliably absurd alien sidekick — makes this the best of Archer’s three “coma dream” seasons.

Wait, so he wakes up from the coma?

Dude, you didn’t even read the intro did you?

[Long sigh] Yes, following an awesome montage, he awakens in the season finale to discover he’s been in a coma for three years.

Although the new season is the first without show creator Adam Reed, it feels good to return to the original Archer-verse after an extended break.

Sounds cool, when can I watch?

So glad you asked: Archer premieres with back-to-back episodes on Wed. Sept. 16 at 10pm ET on FXX. Follow the link below to add Sling Blue + Hollywood Extra to your Sling package today.