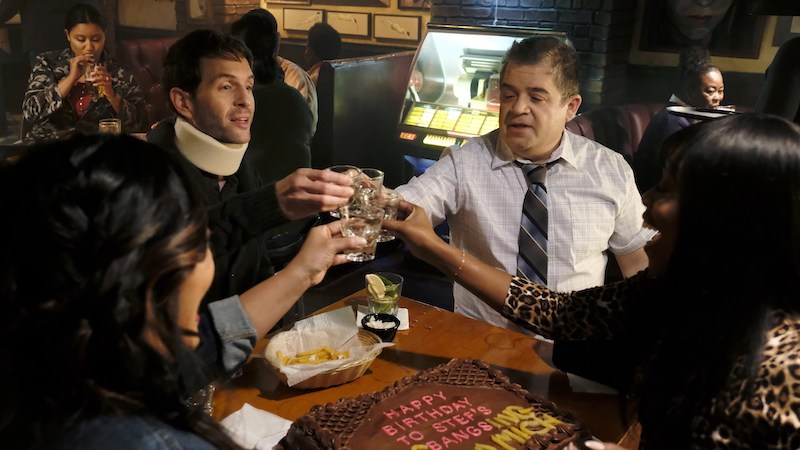 A.P. Bio stars Glenn Howerton as Jack Griffin, a former Harvard philosophy professor who loses his job after finding himself in a headlock during a fight at his tenure hearing. Disgraced, he is forced to move into his dead mother’s home in Toledo, Ohio, and start teaching advanced placement biology at the local high school, leaving him as resentful as he is arrogant and entitled. Others see him quite differently, however– one local news reporter refers to him as a “maladroit doofus who some claim used to be a Harvard professor.”

Howerton is best known for his work on It’s Always Sunny in Philadelphia, where he played Dennis, the narcissistic, occasionally psychotic misanthrope who is always working the angles, so Jack Griffin is right in his wheelhouse. His frequent foil/victim is Principal Ralph Durbin, a spineless middle-aged man constantly draped in plaid short-sleeved shirts and tan khakis, a midwestern cypher played by comedian Patton Oswalt (King of Queens, Ratatouille, Happy!).

Durbin loathes confrontation so much that in one episode he farms out the delivery of bad news to one of the kids, putting an end to the charade only after the kid uses his newfound power to get a grade changed. So needless to say, a walking attitude problem like Jack is his worst nightmare.

Upon first meeting his charges, Jack tells them he will not, in fact, be teaching them AP Bio, but offers them a deal: if they rat him out, they’ll fail; if they keep their mouths shut, they’ll get an A+. Once the kids are (reluctantly) on board, he spends Season One enlisting them in his efforts to take down his nemesis, a former colleague who landed the Stanford post that Jack had coveted. In Season Two, Jack forces the kids to teach him about life in Toledo so he can write a book about how the locals have found the secret to happiness. Along the way, Jack conspires to steal a statue from a local church and suffers another blow to his ego when Durbin is ranked higher among Toledo’s Top 100 bachelors.

But Jack and Durbin have an even greater problem: NBC has announced the show is being cancelled after two seasons. After getting the news, Oswalt took to Twitter to launch a campaign to save the show:

I mean, there’s no better way to spend Memorial Day than binge-ing @NBCAPBio on @hulu. Who KNOWS what might happen if those numbers spiked? Whoooooo knows? #SaveAPBio #BingeBioOnHulu pic.twitter.com/73VQt9FYSx— Patton Oswalt (@pattonoswalt) May 25, 2019

Even this nice article quotes our NIGHT OF numbers and not dvr/streaming (how most people watch tv now days and the argument for a streaming site to make serious money off the millions we’d bring!) Sorry our fans don’t watch it live! Doesn’t mean we don’t have fans. #SaveAPBio https://t.co/FOaWrknPR9— Mike O’Brien (@MikeOBrienXOXO) May 26, 2019

Soon enough, #SaveAPBio was trending, with co-stars Howerton and Mary Sohn raising the flag, as well. A.P. Bio may be circling the drain, but she’s not dead yet. You know what to do, people: watch it.

Watch the next episode of A.P. Bio June 13 at 8:30pm on NBC; all past episodes are available on demand.