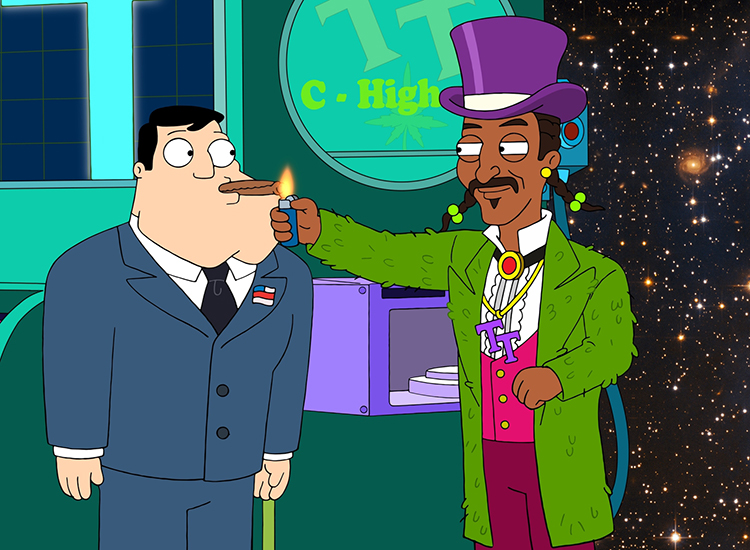 There are only a handful of scripted shows that have run for 15 seasons or longer. The animated comedy American Dad! might be the most surprising show to have reached this elite benchmark. When the show premiered in 2005, it was positioned as a more topical version of Family Guy, with a satirical focus on Bush-era militarism. But over the course of its now 17 seasons, the show has developed its own comedic tone and sensibility, one that borrows equally from absurd plots and relatable family dynamics.

Having aired its 300th episode last fall, American Dad! has built a passionate following of fans, both anonymous and famous. In honor of the Season 18 premiere—which airs Monday, April 19 at 10pm ET on TBS—we put together this brief list of some of the show’s best celebrity guests. To watch American Dad! live and on demand on Sling, sign up for Sling Orange with TBS using the link at the bottom of this page.

The Weeknd - “A Starboy is Born”

There have been many, many celebrity guests on American Dad!, but only one got a co-writing credit for their guest spot: The Weeknd. A longtime fan of the show, The Weeknd played himself  and co-wrote an original song for his Season 17 episode “A Starboy Is Born.” The song is a legit jam that would fit comfortably alongside the music on his newest album After Hours….if the lyrics weren't about how he’s actually a straight-edge virgin. “Right now, I’m using my virgin powers to win Grammys,” Weeknd tells Hayley after her seduction fails miserably. Given that The Weeknd was bizarrely frozen out of Grammy nominations last year, we can go ahead and assume that he’s since abandoned this strategy.

The Weeknd is hardly the first musician to appear on the show. The legendary S-N-Double-O-P-D-O-Double-G (you see) played Tommie Tokes in the Willy Wonka parody “Jeff and the Dank Ass Weed Factory.” Even if Snoop is a fairly obvious choice for the roll (sorry), he does a great job as the head of the factory, which employs an army of “Snoopa Loompas” to assist with the cannabis creations. Is it a coincidence that the new season of American Dad! premieres the day before 4/20? We HIGHLY doubt it (again, so sorry).

Roger the Alien has always been a fan favorite and his storylines are usually about some kind of misadventure involving one of his many alter egos. The season 6 episode “Ricky Spanish” is perhaps the best Roger episode, as he attempts to make amends for the wrongdoings he perpetrated under the titular moniker. However, the funniest part of the show is when the central metaphor for redemption—a butterfly emerging from chrysalis—is revealed to be a Werner Herzog documentary, with the director himself providing portentous narration like, “two beautiful creatures trapped in a prison of another’s design, like a madman lost in a supermarket.” The German filmmaker has since gone on to make memorable cameos in other comedies like Parks & Recreation and Rick and Morty.

As fans of Curb Your Enthusiasm know, JB Smoove brings an electric, anything goes spirit to his guest appearances. Although Smoove has had a recurring role on the show as the airport security agent Leslie, he made the biggest impression as Tracey, the former “prison wife” of Principal Lewis in the Season 7 episode “The Worst Stan.” When Tracey interrupts Lewis’ engagement party, it’s hard to imagine a better actor to scream the lines, “This ring is made out of love and commitment and pipe cleaners and human teeth!”

Plenty of celebrities have appeared on the show, and many of them played themselves. But as far as we know, only one has appeared in both human and cartoon form: Cee Lo Green. In the Season 7 premiere “Hot Water,” Cee Lo appears as both the fourth-wall-breaking narrator in live action segments, as well as the murderous hot tub. We won’t spoil it here, but the episode’s hilarious ending secured Cee Lo’s spot on this list.

To watch American Dad! live and on demand via TBS, use the link below to sign up for Sling Orange.