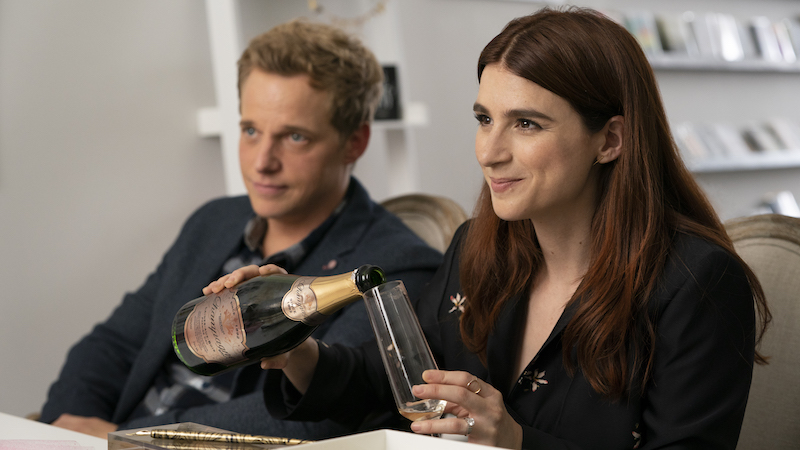 It’s been a bumpy ride for the star-crossed a-holes who found each other while heckling a doomed wedding, had a hilariously sloppy one-night stand, and turned it into an on-again, off-again long-term relationship.

As we rejoin misanthropic British novelist Jimmy Shive-Overly (Chris Geere) and catastrophically selfish music publicist Gretchen Cutler (Aya Cash) in the fifth and final season of You’re the Worst, they have reunited after spending season 4 in relationships with other people. Much like season 4, which confusingly began with a full episode of Jimmy living in a trailer park in the desert and seemingly having shed all connection to his life in Los Angeles, we fade in on a totally unfamiliar character and follow his story, set in 1997 at a video store (complete with very specific, amusing period details) for the better part of a whole episode before revealing how it connects with Jimmy and Gretchen’s story — and once it does, it gets funnier and funnier.

Our dyspeptic lovers are still engaged, after reuniting at the end of season 4, but exactly when, where and how they get married is still a matter of some dispute, and provides the main story thread for the season. Jimmy’s erotic novel, The Width of a Peach, has been optioned for a movie, and Jimmy has to consider whether he wants to “sell out” by writing the screenplay, and then consider the ripple effects of such a decision; Gretchen, meanwhile, having gotten a promotion (or, put another way, #metoo’ed a guy so she could take his office), has to “hire a new bitch” (her words) to take her place as her assistant, a task she uses to distract her from the intimidating task of telling her mother about her engagement. Along the way, she has a torrid affair with a bidet, calls a prospective hire “sausage wallet,” makes Jimmy taste Salty Fruit Glue, and plans to have “champons” (I will not spoil what that means) with her trainwreck BFF Lindsay (Kether Donohue).

Jimmy’s roommate, PTSD case-turned-comedy writer Edgar (Desmin Borges) is still in a FWB situation with Lindsay (Kether Donohue), has a new mentor who torments him in a very strange (and hilarious) way that again, I shall not spoil, and with his recent experience working for Doug Benson, helps Jimmy navigate his Hollywood pitch meetings.

What else is there to say? You’re the Worst is still the best relationship comedy out there, loaded with sour jokes delivered by appalling, if oddly charming, well drawn characters, with writers and performers alike in top form, and looks primed to go out on top.

New episodes of You’re the Worst are available on demand Thursdays on FXX.