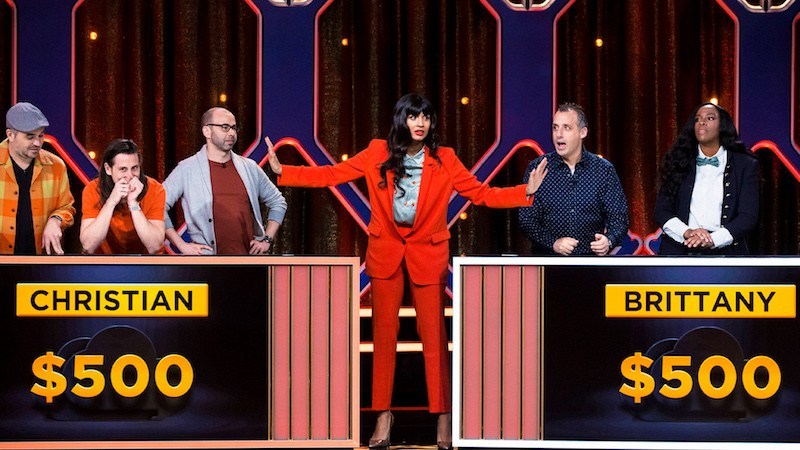 Can misery be measured? Is the trauma of finding out that your daughter has decided to marry a rollercoaster objectively worse than the pain (and long-term psychological damage) of being stuck in an elevator that plummets 30 stories?

TBS’ new comedic game show The Misery Index, hosted by Jameela Jamil (The Good Place) and featuring the Tenderloins (Joe, Sal, Murr, and Q — the guys from Impractical Jokers) as advisors/experts on the topic of humiliation, suggests that it can be.

Two contestants introduce themselves with their own most traumatic story (not scored) and are teamed with half of the Tenderloins before moving on to the game proper: Guessing where a particular embarrassing, painful, or traumatic incident, ripped from the headlines, falls on the Misery Index.

To start, Jamil reads aloud two awful (but amusing) real-life incidents, along with those incidents’ Misery Scores, as determined by a mysterious star chamber of psychologists: You’re attacked by a bear — 64 points. You send a nude selfie to HR — 80 points. Then a third incident is read to the contestants, who then have to guess whether it scores above, below, or in the middle of the range set by the first two.

It sounds somewhat complicated, but it’s mostly a vehicle to get the Tenderloins riffing on awful things that happened to real people, which they do with great aplomb. Jamil proves a good foil for them, feigning schoolmarmish impatience with their tangents but unafraid to jump in with a joke of her own.

This is the kind of show best enjoyed with a group — the miserable incidents discussed are likely to spark a discussion in your own living room about what is worst and why. My 12-year-old son loves this kind of humor.

My one complaint with this show is they are a little vague about who the panel of expert psychologists are and how exactly they approach the process of quantifying trauma. I’d be interested in a (comedic) look into the process.

New episodes of The Misery Index air at 10:30pm ET Tuesdays on TBS. The first four episodes are now on Sling On Demand.