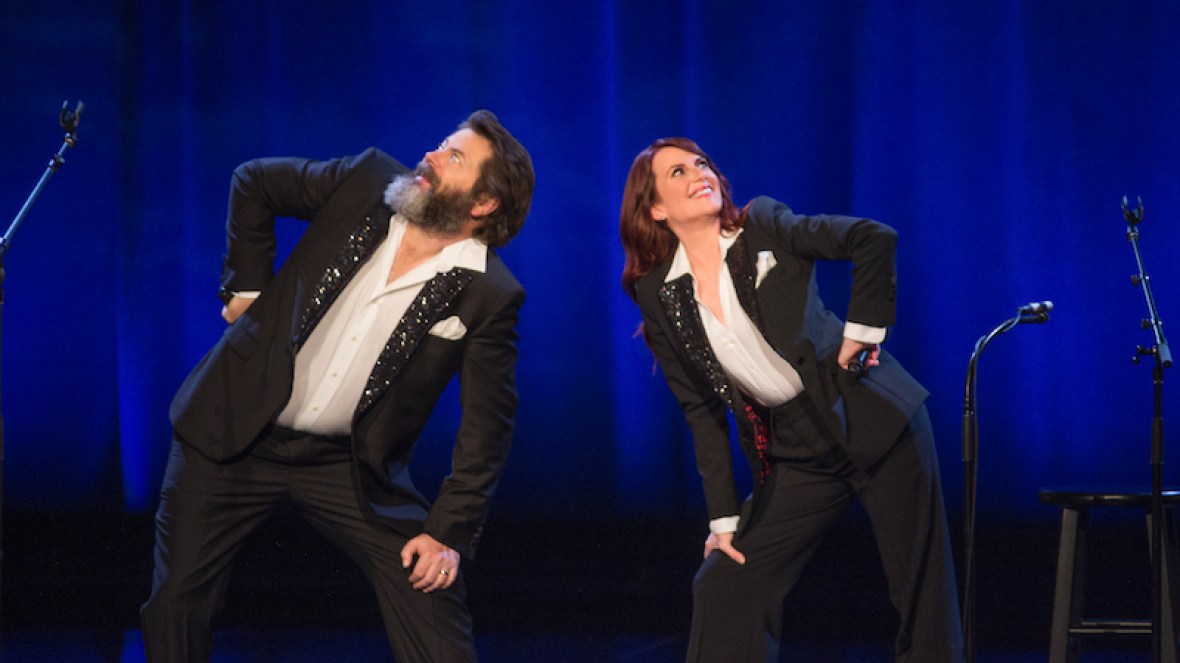 A few years into her run playing vodka-drenched gold-digging socialite Karen Walker on the hit sitcom Will & Grace, actress Megan Mullally made the acquaintance of a then-unknown actor named Nick Offerman. Four months later Offerman would bed Walker — how does one know this? It’s just one of the many hilariously, cringingly intimate details of their romance that the duo share as part of their new folk music-filled variety special Nick Offerman & Megan Mullally – Summer of 69: No Apostrophe.

Any doubts as to where the title comes from are dispensed almost immediately, as the couple kicks off their show with a duet on “Summer of 69,” a song in which they discuss in depth the agitated states of their respective genitalia, and the contortions that are a natural part of the eponymous sexual position. Make no mistake, these two work blue. In the midst of administering a compatibility quiz to a young couple pulled from the crowd, the Offerman and Mullally begin to argue about at what altitude one should initiate “butt sex” while skydiving, with one representing traditionalists, the other the maximalists.

But it’s not all pillow talk. One of the funnier bits has the couple turn to the audience to adjudicate a marital dispute in which the central question is which one of them is in fact a heartless tree murderer. And not all the violence discussed is against helpless flora, as a performance of their wedding vows details their desire to dress as cats and make human sacrifices “all in the kitty lord’s name,” while an epistolary exchange recounts how their temporary separation led to a descent into madness that involved rolling naked in white cheddar Cheez-Its, murder, the theft on Uber, and the eating of a live pigeon.

Peppered throughout are references to their fame, such as it is. They have no illusions about being anything more than supporting actors in the eyes of Hollywood, and they delight in aping and subsequently mocking the puffed up egos of their betters. As Mullally runs down her husband’s resume, she mentions “Season 2 of Fargo; 22 Jump Street — another sequel.” It’s the kind of subtle zinger that would gut anyone who took themselves seriously.

The couple have been touring Summer of 69 as a live show around the world for a couple of years now, and both are seasoned performers with a natural sense of comedic time, but they give the show an intentionally off-beat, almost unrehearsed vibe, with Offerman in particular going slightly off-script on occasion. The result is a cross between Andrew Dice Clay, Marty & Elayne and A Mighty Wind straight from the heart of the Borscht Belt. Mullally and Offerman clearly adore one another, and if their marriage is half as happy and fun as Summer of 69 makes it look, we should all be insanely jealous.

Nick Offerman & Megan Mullally – Summer of 69: No Apostrophe premieres 10pm ET Friday on EPIX, and will be available on-demand.