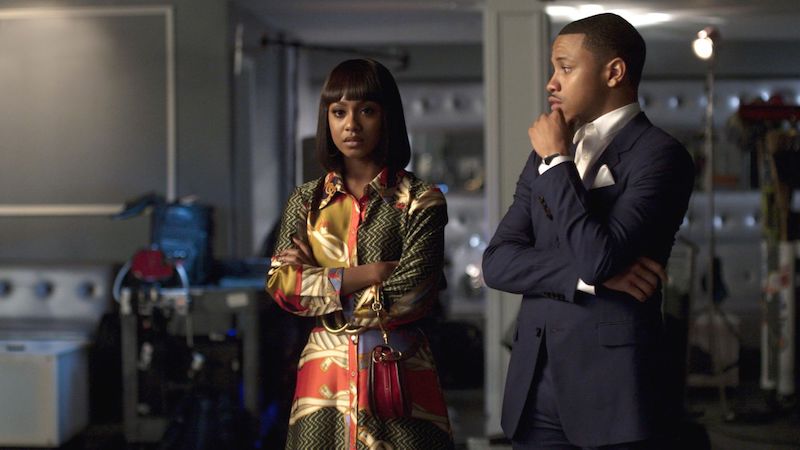 The 1992 romantic comedy Boomerang, featuring a peak-of-his-powers Eddie Murphy, was so titled because it concerned Murphy’s womanizing karma coming back on him: he meets a woman (Robin Givens) who is basically a male version of himself, who breaks his heart and eventually drives him into the arms of a warmer, less flashy colleague (Halle Berry). Creators Lena Waithe and Ben Cory Jones’ BET sequel series Boomerang is so titled not because it features a similar karmic payback, but because it brings back the world of the original film — if not any of the original characters (yet).

The movie, which also featured the likes of Martin Lawrence, David Alan Grier, Chris Rock, Eartha Kitt, Grace Jones, and Geoffrey Holder, presented a world of smart, successful, attractive, put together black professionals with nary a white face in sight — something seldom seen on screen in 1992 and sadly not all that much more common now — and the new series continues in the same spirit, if not with a full roster of legendary performers.

But just as Halle Berry, Martin Lawrence, and Chris Rock were just beginning their ascents to legendhood in 1992, the new Boomerang appears set to launch a few big careers.

Simone Graham (Tetona Jackson) is the daughter of Murphy and Berry’s characters, who we meet working at their agency and butting heads with the old guard — represented in the pilot’s cold open with a hilarious House Party fade and a pixie cut similar to Berry’s circa 1992 — on set at a commercial shoot. Her closest professional confidante, Bryson Broyer (Tequan Richmond), is the son of Robin Givens’ character, Jacqueline, and he is more measured and more timid than Simone, but also has better ideas. They complement each other well, they have a shorthand that comes from having grown up together, and it takes all of about 4 seconds to figure out that they are the series’ One True Pairing — and it takes about 6 seconds to realize the show is going to take its sweet time getting there.

And that’s fine, because the show has more on its mind, with a broad ensemble cast of well drawn characters that form an intriguing web of modern romantic complications. Jackson is totally charming and assured as the commitment-shy Simone, and enjoys an easy chemistry with Richmond, whose heart almost audibly flutters every time she enters a scene, even as he’s trying to keep cool.

Brittany Inge is warm and likable as Simone’s BFF Crystal, who also works at The Graham Agency and has stayed friendly with her ex-boyfriend David (R.J. Walker), a teetotaling young minister building a ministry; Leland Martin is amusing as fussy aspiring director Ari; Lala Milan plays prickly avant-garde performance artist Tia, whose career Simone takes an interest in; and Joey BadA$$ plays against type as a famous rapper with whom Simone has a more casual relationship than he’d prefer.

I’ve spent a lot of time here talking about the relationship Boomerang the show has with Boomerang the movie, but the truth is that apart from a few throwaway lines about Simone’s father and Bryson’s mother and The Graham Agency, if this show had a different title no one would know the difference. It’s a smart, insightful, gently funny look at millennial romance with a lot to say, no matter what it’s called. (Although, Halle Berry is listed as an executive producer on this show, so who knows, maybe she’ll turn up at some point.)

New episodes of Boomerang air at 10pm ET Tuesdays on BET; the 1992 movie is available on-demand to Showtime subscribers.