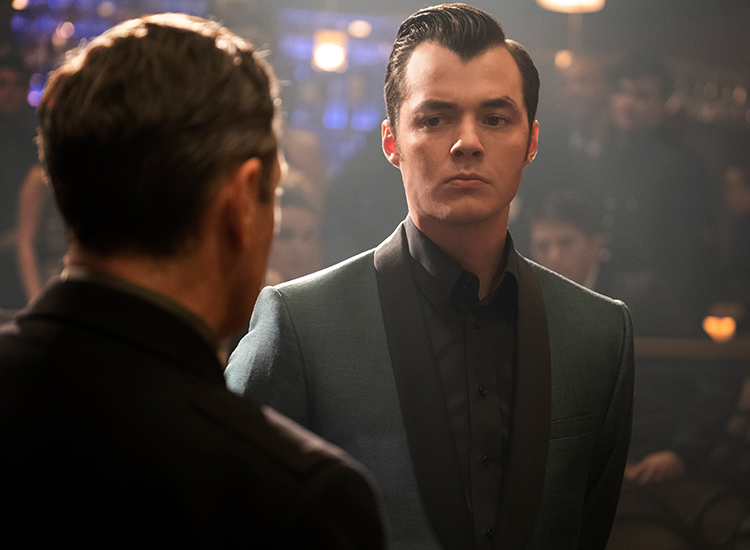 Depending on your criteria, at least six different actors have portrayed Batman on the big screen; there have been nearly as many Alfreds. Michael Gough is the first actor that most of us associate with the role, as he played Batman’s butler/ man-in-the-chair four times, in both of Tim Burton and Joel Schumacher’s movies. Michael Caine brought a dignified, wounded humanity to the role in Christopher Nolan’s Dark Knight trilogy, while Jeremy Irons became the second Oscar-winner to assume the role in Zach Snyder’s Batman V. Superman: Dawn of Justice.

But for a character this familiar, there has never been a close look at Alfred’s own history or origins. Enter Pennyworth, the EPIX series that focuses on the adventures of a 20-something Alfred in post-war London. With EPIX in free preview on Sling all weekend, it’s a great time to dive into the backstory of everyone’s favorite geriatric sidekick before the second season of Pennyworth premieres Sunday night.

The first thing to note is that Pennyworth works on its own terms, regardless of your interest in or familiarity with Batman. The period setting and London locations work in concert to give the show a distinct style and feel, one that’s not all that similar to the grimey, rain-soaked back alleys of the Batman universe. And unlike the petty criminals and villains that populate Gotham City, there’s a grand drama unfolding in Pennyworth, with stakes as high as the Crown itself. The basic plot of season one centers on competing factions of fascists and socialists plotting to overthrow the British government, with our man Alfred “Alfie” Pennyworth and his associates caught in the middle.

It reads a little funny, a Batman prequel about the hitherto unexplored adventures of Alfred the butler. So it’s to the great credit of Jack Bannon that the show is so engaging. With a cockney accent and swagger borrowed from Michael Caine—along with a widow’s peak so sharp and slick, he must comb it with icepicks—Bannon portrays Alfred as a cool and composed leader when required, and a reluctant, tragic hero when needed.

The supporting characters include Thomas Wayne (Ben Aldridge) and his future bride Martha Kane (Emma Paetz)—whose meet-cute involves an unpleasant encounter with Aleister Crowley—and the sadistic Sykes sisters (Paloma Faith and Polly Walker), beehived villainesses who provide a sense of dark comic relief. And the show can get pretty dark; the violence is often graphic and abrupt. But for the most part, it doesn’t feel gratuitous, because Alfred suffers from the type of military PTSD that makes him an efficient and clever killer but a tortured one (you can’t help but wonder how his guilt might later inform Batman’s one rule).

Season one wrapped up with a very dramatic ending that makes its second season difficult to discuss without spoilers. Suffice it to say, the story leans into the first season’s alternate-history elements, nudging it closer to the fantastical revisionism of something like Watchman. But mostly, Pennyworth remains a stylish thriller, with a strong lead and a distinctly English sense of action (which is to say, clever pop music placements in the fight scenes). Whether you're a Batman obsessive or avoid him like a crook, Pennyworth is on the money.

Catch up with season one of Pennyworth on-demand and watch the season two premiere this Sunday night at 9pm ET during the Epix free preview, which runs now through Monday, Dec. 14. To get Sling with one month of Epix free, use the link below.

get epix on sling
caret